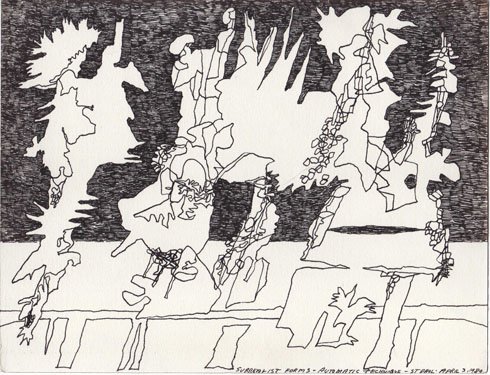 As the retrospective exhibition of one of Minnesota’s greatest artists, Anishinabe artist George Morrison hits the Minnesota History Center this weekend, another exhibition, featuring Morrison’s drawings and sketchbooks, opens at the smaller Bockley gallery in the Kenwood neighborhood of Minneapolis. While the larger show, “Modern Spirit: The Art of George Morrison”, which was organized by the Minnesota Museum of American Art and Arts Midwest and has toured to cities across the U.S. over the past two years, provides an overview of Morrison’s career, “George Morrison: Drawing at the Horizon” offers a another entry-point into Morrison’s work, looking at his process through his drawings and sketches.

Morrison was born in Chippewa City, Minnesota and was a member of the Grant Portage Chippewa Band. After graduating from high school in Grand Marais, he studied in what is now called the Minneapolis College of Art and Design, followed by further studies in New York City at the Art Students League as well as at the École des Beaux-Art and the Université de Aix-Marseilles in the south of France. Morrison’s career took him to Duluth, Minnesota and then back to New York City, where he nurtured an abstract Expressionist style. He spent time at the Rhode Island School of Design as well as in Cape Cod in Provincetown, MA before returning to Minnesota in 1970 to teach Studio Arts and American Indian Studies at the University of Minnesota. He retired in 1983, moving to land that he had purchased with his wife, Hazel Belvo, at the Grand Portage Indian Reservation, where he lived until he died in 2000, according to a press release.

Todd Bockley, owner of Bockey Gallery, where Morrison’s work had previously been exhibited, recently traveled to the Duluth Arts Institute to see a show of the same title as the current Bockley show, where many of the pieces were first shown. “It is a bit of an abbreviated show,” from the Duluth show,” he said. Because Bockley is a smaller space than DAI, Bockley honed in on the drawing work that had been a part of the DAI exhibit, curated by Annie Dugan.

As a gallery owner, Bockley says he’s always had a great love for drawing, which he says is a part of Morrison’s career that hasn’t gotten as much attention as say, his abstract expressionist paintings or his wood collage work.

The body of drawings shown in the Bockley show span his entire career, in some cases relating to the work shown in the traveling MMAA show.

Of particular interest are Morrison’s sketchbooks going back as early as 1942, which are from the collection of Morrison’s son, Briand Morrison, who is a musician, Bockley said.

In some of the sketchbooks, Morrison would include writing as well, where he would give some context about the techniques he was trying such as automatic drawing, Bockley said. “He’s written it out in long hand,” Bockley said. “It’s very charming and interesting.”

“Drawing is an intimate medium,” Bockley said. The sketchbooks give “great insight into the person as an artist.” Because a lot of his material was first generated in sketchbooks, “the work is very personal,” he said.