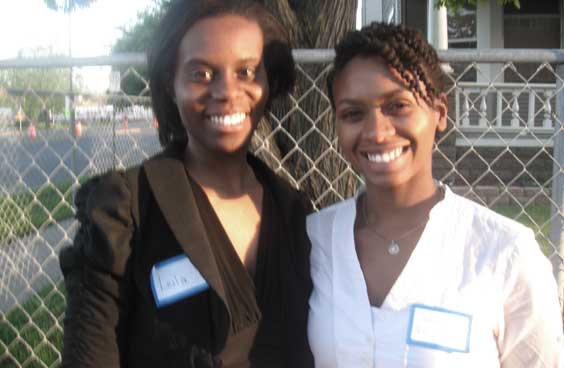 Leila Page-Baker (l) and Monique Jones helped plan the April 26 “What Happens to Youth Who Age Out of the Child Welfare System” symposium. (Photo by Dwight Hobbes)

“I’m very pleased with how today’s presentation went,” states Carolyn Smith, Project Manager of Ramsey County Permanent Families Recruitment Project (PFRP). April 26, at the St. Paul Public Library-Rondo Branch, the “What Happens to Youth Who Age Out of the Child Welfare System” symposium had just wrapped up. “We had an audience that showed a great deal of interest, asked a lot of questions. Our panelists were very informative and gave a lot of good information.”

On that panel was Karen Franklin, Permanency Specialist with PFRP, who agrees, “It was important to share information about foster care [with] people who now have the knowledge to make a decision about adopting — to make an informed choice.”

Common questions about adoption tend to be along the lines of considerations, like how long it takes (four months on the average), whether a family can adoption more than one child at a time (yes), and whether an agency will help if problems arise with the adoption (yes). A FAQ (frequently asked questions) checklist is available at www.co.ramsey.mn.us.

Leila Paye-Baker of LSPR Public Relations served as consultant with her husband Melvin Baker and colleague Monique Jones, helping Ramsey County Human Services plan the event, pull statistics together and, as she says, “just really promote [it]. It’s very important to get [the] word out and let the community know, to create awareness that we need to keep children from aging out [of foster care]. Seeing the number of people who were here today was awesome.”

In Ramsey County, where Black youth are 20 percent of the child population, they make up 54 percent of the those in out-of-home placement. This is compared to 13 percent Hispanic, eight percent Native American, four percent Asian American and 33 percent White. The consequence is of no small impact.

Studies document that the outlook for foster youth who age out often is grim. One in four is incarcerated within the first two years after exiting the system. More than one-fifth will become homeless at some time after age 18. About 58 percent achieve a high school degree at age 19, compared to 87 percent of a national comparison group of non-foster youth. Of youth who age out of foster care and are over the age of 25, less than three percent earn a college degree, compared with 28 percent of the general public.

Karen Franklin comments, “When you begin to look at the overwhelming circumstances of our African American children, the need is great.”

For Paye-Baker, it isn’t only a matter of going about her profession to get word out on the project, “My husband [went through] foster care. We really are passionate about kids. I work [extensively] with at-risk youth,” she says.

Melvin Baker adds that a successful foster-care experience can mean all the difference between whether a young, male African American makes something of himself or goes on to running the streets in a dead-ended lifestyle. “We know how bad the problem is of Black men being absent in young Black men’s lives. [The project] connects with kids who are just out there, who don’t have any guidance, don’t have any [positive] adult figure.

“I can tell you from my own experience. I [was] one of those kids who aged out of foster care.” Baker is emphatic that PFRP is valuable resource in salvaging youngsters, period. “Absolutely. It helps families see that these youth don’t have to be a stereotype. Sometimes we, ourselves, see them in that light. And we don’t have to. They need love just like anybody else.”

Monique Jones views the Permanent Families Recruitment Project as an excellent way to counter another stereotype: that of young girls taking on the babies-making-babies syndrome. “The project is new, but, I’m hopeful that [adolescents of both genders] are going to be learning to respect their bodies, to cut down on girls being promiscuous by encouraging them to have life goals. Have priorities that lend themselves to, ‘I want to go to school. I want to get a job. I want to keep bettering myself.’”

In addition, of course, to safeguarding youngsters in the community, there are other benefits. Such as voluntary, employer-funded policies for workers who adopt; financial reimbursement for adoption expenses ($500 to $25,000 per adoption, the average policy offering a maximum of $5,000); paid leave (employers provide one to 18 weeks, the average time being six weeks); and unpaid leave in addition to FMLA ranging from a week to a year (the Family Leave and Medical Act requires companies of 50 or more employees and all public agencies to grant 12 weeks of unpaid adoption leave).

Jones, who herself is a successful adoptee, sums up, “It really is something that strengthens everyone: the family, the child, the community.”