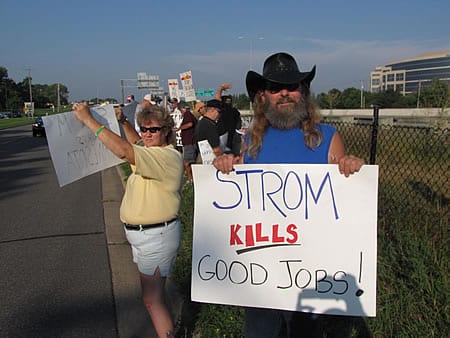 Ronney Wendlandt of Hutchinson (above), a mechanic at the American Crystal Sugar facility in Chaska, is one of the the 19 BCTGM Local 265G workers at the Chaska plant who have been locked out since Aug.1. Wendlandt has worked there since 1977. SEIU Healthcare Minnesota member LaDonna Meinecke (below, right) attended the rally with daughter Lainy VonBank, a high school sophomore. "If this stuff continues, it will affect me… all the union busting," Lainy said. (Photos by Steve Share)

Thursday began the second month of a lockout of 1,300 union workers by American Crystal Sugar, which has contracted with Minnetonka-based Strom Engineering to supply replacement workers. Union members marked the day with a rally outside Strom’s headquarters, calling for an end to the use of scab labor and an end to the lockout. The rally drew about 60 union members and supporters, including locked-out workers from East Grand Forks and Chaska who are members of the Bakery, Confectionary, Tobacco and Grain Millers union. 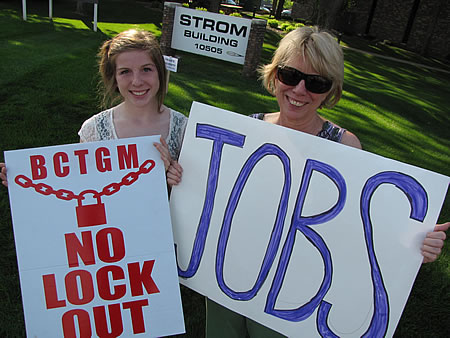 “Let’s get the scabs out of there,” said Dean Hemmelgarn, one of the locked-out BCTGM workers from East Grand Forks, addressing the rally. The replacement workers, he said, can’t operate the equipment at the plant safely and properly. “They blew up one of our boilers,” he said.

Jerry Lahr, president of BCTGM Local 265G in Chaska, said that 15 of the 19 workers locked out there were present at the rally. “We want the scabs to go home and we want to go back in and do our jobs,” said Lahr, who has worked 36-1/2 years at the Chaska plant. He also reported production problems at the Chaska facility, where union workers have been replaced. “No one can do the job as well as a trained, experienced union worker.”

“When you have a contract voted down by 96 percent, there’s something wrong,” Lahr said. He emphasized: “we kept telling [the company] we will not go on strike; we would work without a contract.”

Shar Knutson, president of the Minnesota AFL-CIO, spoke to the rally. She related how two years ago she was invited to meet with American Crystal Sugar’s CEO, Dave Berg. “He talked over and over again about how important the relationship was between the company and the workers and the farmers… What happened?”

“Corporate America is doing well and sitting on record cash and they are using every excuse they can to undermine middle class jobs and wages,” said State Representative Ryan Winkler, speaking to a reporter after the rally. “Unless we have a strong middle class, we are never going to turn this economy around.”

“In this case,” Winkler continued, “ American Crystal Sugar is making record profits. Their CEO is making a record salary. There’s no reason they should be trying to get concessions right now. It looks like plain old greed.”

“One union brother’s fight is a fight for all of us. They’re trying to pick us off one at a time.… It is such a time to fight back,” said Dorothy Maki, vice president of Amalgamated Transit Union Local 1005, who attended the rally.

In addition to BCTGM and ATU members, other unions represented at the rally included the construction trades, AFSCME, SEIU Healthcare Minnesota and Teamsters Local 120.