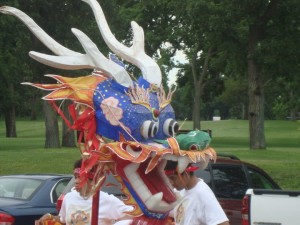 The Dragon Festival’s Phalen lake location and a string of good weather years has made it a highlight of summer. This past weekend it rained, and rained hard a the end of the event, but not until it had run its course for another successful year.

The festival started activities earlier this year, with an early morning health walk around the lake, and a morning hip hop demonstration and competition on both days. The The Festival begins officially with an Awakening the Dragon ceremony, involving a long dragon dance procession by members of CAAM Chinese Dance Theater, with blessings by monks. A similar ceremony puts the dragon to sleep on Sunday evening.

“I am very pleased by the turn-out,” said Ilean Her, Dragon Festival Event Chair. “Despite the threat of rain, festival goers came in droves to support us and we appreciate that very much.”

Her said the two-day event was a wonderful days and that people said they would be back again next year. Much of the festival had concluded the time the rains came but there were still dragon boat races to run. The Smiths Medical and American Family Insurance team were not able to compete the last run on Sunday because of the storm. Because of the weather and the shortened second round the final results took a little work to figure out – but in the end

“What a wild and wet finish this year,” said Yuan Roger Lee, chair of the Dragon Boat Race Committee.

Linda Hashimoto van Dooijeweert, the cultural entertainment chair, said the Dragon Festival is possible only because of volunteers that helped set up the stage and take it down.

This year’s volunteers, coordinated by May Yang, were mostly Harding High School Japan Club members – some of who volunteered for the Festival of Nations Japanese food booth fundraiser to benefit the Dragon Festival.

There were also individual volunteers and members of the Sansei Yonsei Kai Japanese dance group.

“Both volunteer groups were the last ones to leave the festival on Sunday night, and the dancers came in again Monday to help dry off and sort all the decorations that need to be put away until next year,” said Hashimoto van Dooijeweert. “We could not have done it without their help!”

Elaine Dunn, Festival Committee member, said feedback during the festival was complimentary. “They loved the community feel and that all the activities and entertainment were free,” said Dunn. “Many indicated they come every year and still find something new and interesting.” The Dragon Festival is a nonprofit organization with a mission to bring together the Greater Twin Cities community in celebration of the diverse Asian-Pacific cultures. The first festival was held 15 years ago at Hamline Park on N. Snelling Avenue, and was moved to the State Capitol grounds, and to the UniDale parking lot before moving to Phalen Lake in 2003. It has since become the largest pan-Asian event in the Twin Cities.

The next Dragon Festival will be held July 9 and 10, 2011. Find out more online at www.dragonfestival.org.