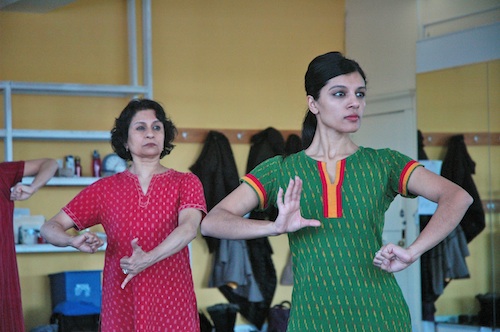 It’s East meets West over at the Cowles Center for Dance and the Performing Arts this weekend as Ragamala Dance debut their newest performance, 1,001 Buddhas: Journey of the Gods. And by East means West, I mean both Western and Eastern Hemispheres as well as Western and Eastern sides of the Asian Continent. This show brings together musicians and dancers from the United States, India, and Japan in a show that looks at their shared cultural histories.

At the heart of this show is a collaboration between Ragamala Dance and Wadaiko Ensemble Takora, based in Japan. Ragamala’s co-artistic0director Aparna Ramaswamy first met the troupe’s founder, American-born Art Lee, in 2006 at a festival in Texas, and they got along so well that the two companies have been working together ever since. Through a grant from the Japan Foundation, Ragamala went to Japan in 2008 to collaborate on what eventually became Sva (Vital Force).

While in Japan, Ramaswamy says she went to go visit the 1,0001 Buddhas at the Sanjusangendo temple in Kyoto, Japan. She was surprised to find that each of the guardians of the temple each had a sanskrit name. Hindu Gods, she discovered, had been changed into Buddhist guardians.

That led to the creation of 1,001 Buddhas: Journey of the Gods, exploring the histories and energies of the Hindu gods, or guardians, that appear on two sides of the Asian continent.

Along with mother/daughter choreography team Ranee and Aparna Ramaswamy, who also both perform in the show, the performance will also feature a mixed race ensemble of dancers, including Aparna’s younger sister Ashwini, a beautiful dancer in her own right.

Propelling the dancers forward is the ferocious beat of the Taiko drums, juxtaposed with the Chendra drum, performed by Kalamandalam Unnikrishnan, which gives nuance to the characters, says Aparna Ramaswamy.

Rajna Swaminathan, who plays the mridangam drum, says it can be a challenge sometimes because the mridangam is an indoor drum, much softer than the large taiko drums. 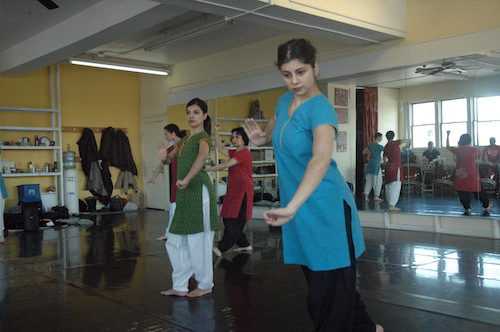 Musically, “Taiko gives a feeling of grandeur,” Ramaswamy said, which mirrors the majesty of the guardians.

Art Lee says that the Takora group has adapted Japanese Taiko drums to tell the story. Traditionally, Taiko drums are played with a simple time signature, so that anybody can play them. However, it’s a lot more complicated with the intricate and complex rhythms of Southern Indian dance.

He explains that while the Southern Indian musicians create the mood, the Taikos work to create a powerful expression. 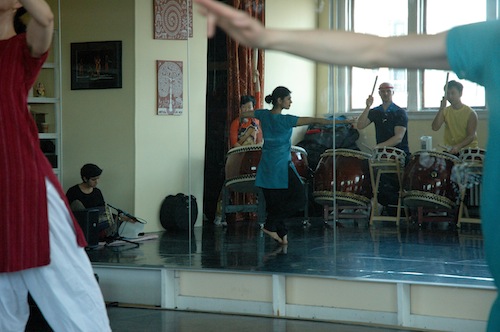 In addition to the percussion instruments, Ragamala is also accompanied by Lalit Subramaniam’s voice and Anjna Swaminathan on the violin.

As for the choreography, Ramaswamy says that while she doesn’t stray from the traditional language of Bharatanatyam dance, she can speak freely from within that language, using poses, body stances, leg lifts, etc., so that it becomes Ragamala’s own creation. “Deep innovation comes from a place of history and codified language,” she said.