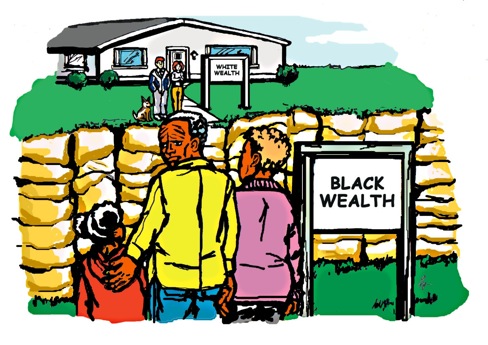 Between 1984 and 2007, “the racial wealth gap increased by $75,000, from $20,000 to $95,000…(excluding home equity)” between U.S. Whites and African Americans.” This information comes from a research and policy brief from the Institute on Assets and Social Policy released in May of this year. Experts disagree on whether failures of individual responsibility or misguided public policy is the primary culprit creating and perpetuating this gap.

Dr. Rose Brewer, professor of African American and African studies at the University of Minnesota, is co-author of The Color of Wealth: The Story Behind the U.S. Racial Wealth Divide, a 2006 book that compared the wealth of Blacks to that of Whites. Brewer says that wealth inequities are nothing new, though this more recent report shows how the situation has intensified over the past few years.

“Wealth, in fact, is passed on inter-generationally,” Dr. Brewer says, “and the history of wealth in this country is a very ugly story.”

Brewer explains that with the end of the World War II era came the G.I. Bill, making it possible for returning White G.I.s to receive mortgages at lower cost than ever before in history. It created the White middle class. This opportunity, however, was not made available to African Americans, and while returning White G.I.s had access to low-cost educations, the Jim Crow laws of the era severely restricted Blacks from accessing the same educational options.

Since that time, Blacks’ access to the typical means of acquiring wealth has continued to be blocked. Financial advisor Nneka Morgan is the host of Financial Fitness, a program on KMOJ-FM radio focused on financial health. She says that the easiest way to acquire wealth is one African Americans tend to ignore: saving.

Though some Blacks limit their savings to money remaining after paying bills, Morgan believes that savings should be an ongoing priority no matter the financial situation, a belief she established early in her career. While on her way to meet one of her wealthiest clients for the first time, she ended up in a trailer park and called him for directions. He directed her to the trailer where he lived.

Over time, the client had accumulated well over $500,000 in cash by putting away money starting at age 21 from his job as a janitor. When Morgan met him, he was in his 70s.

To the African American community Morgan says, “I think we have to start having conversations to examine why we place importance on depreciating assets.”

The importance of income

Although income is not directly related to wealth, it has the potential to make wealth easier to acquire. A recent research brief released by the Minnesota Private Colleges in July of this year reports that Blacks without a high school education made less than any other racial group in Minnesota ($11,190) and less than half that of their White counterparts ($22,767).

Although the gap lessens between Blacks and Whites with a bachelor’s degree, ($39,568 versus $52,808), it is still significant, and only American Indians fare worse ($38,408). At the graduate level the gap widens again, ($67,693 for Blacks versus $82,728 for Whites). At this level African Americans fare better than American Indians and Hispanics Americans, with Asian Americans averaging only slightly less ($80,744) than their White counterparts.

“We know that even with four-year degrees and higher education, the Black middle class finds itself stymied, [though] not quite as dramatically as the Black poor,” Brewer explains. “Obviously, I would be the last person to say don’t pursue higher education; but education alone has not been the panacea people said it would be in terms of closing both the income gap and the wealth gap.”

Morgan feels that African Americans get into trouble when they let others define success according to their rules. She feels more Blacks should define themselves through entrepreneurship, which would serve as a mechanism for “putting the pieces back together” in the African American community.

“What we have to do is get empowered to start our business and start employing others, because when you set the salary it’s a little bit different.” Unfortunately, Morgan says, our educational system nether encourages, supports or prepares graduates with the skills necessary to go into business for themselves.

According to data collected between 1984 and 2007 in the Institute on Assets and Social Policy report, income was not a reliable predictor for wealth accumulation when home equity was excluded. For Whites, the median wealth holdings have increased significantly (from between $50,000 and $100,000 to approximately $240,000) for high-income and middle-income earners (from approximately $20,000 to approximately $70,000). Median wealth holdings remained constant for middle-income African Americans and decreased for high-income African Americans.

Morgan stresses the importance of financial literacy. She says that part of the problem is that African Americans begin accumulating wealth much later in life than Whites. When she began her first job working on Wall Street, she was shocked to find out how early her non-African American counterparts became engaged in conversations with their parents around saving, investing and accumulating wealth, and how much they were encouraged to save.

According to the 2008 Ariel-Schwab Black Investor Survey, although nine out of 10 of both working Blacks and Whites have access to an employer contribution plan such as a 401(k), and 90 percent of both groups contribute regularly, Blacks on average contributed $169 per month, whereas Whites in the same income group contributed $249.

“When you look at the time value of money and compound interest, it doesn’t [allow] time for us to get our stuff together,” Morgan says of these contribution rates. By including children in these conversations early, Morgan believes they are able to learn from both their parents’ successes and mistakes and thus become better able to navigate their financial commitments.

Dr. Brewer does not discount the importance of financial education, but she does not believe that it is the primary force behind the economic divide.

“It’s very interesting to me that those individualist kinds of explanations always get a lot of weight and the institutional barriers get downplayed… Wells Fargo, for example, has a very terrible record with providing loans to even people who have perfect and good credit and who on every factor have parallel profiles as White borrowers and still get exorbitant interest rates.”

In April of his year, Wells Fargo Bank settled with the NAACP in a lawsuit regarding their unfair lending practices and violation of the Fair Housing Act.

Where to from here?

In 2008, the news journal Education Week reported Minnesota graduation rates at 43.6 percent. Morgan believes that this education gap has a direct link to the current wealth gap. When young children are empowered with financial information, she says, they will realize the importance of finishing high school.

However, home is not the only place where these conversations should take place, according to Morgan. She also places a lot of responsibility on Black churches.

“Every Sunday you go somewhere where they talk about giving money, and there’s nothing wrong with that.” But alongside conversations around tithing, Morgan says there should also be financial literacy workshops and information on savings provided for children at an early age.

The Fair Housing Act of 1968 made redlining illegal, making it possible for people of color to purchase homes in places they had not been allowed to do so before. But currently, on the heels of an economic and foreclosure crisis, Brewer says, “That has sucked up a lot of potential equity and wealth from…many African American families and communities across this country… The undertone to all of this, of course, is that institutional racism has not been eliminated. Indeed, it remains a big hurdle.”

Just as the Fair Housing Act changed the landscape for African Americans in homeownership, Dr. Brewer says, “Public policy makes a difference. Certainly anti-discrimination laws are important, certainly calling on the carpet unfair lending practices… Public policy certainly has the potential to [create opportunity], but you have to have the political will for that to happen.”