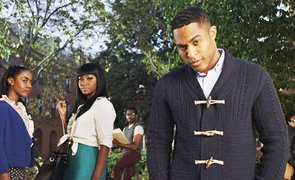 (Photo courtesy of Lionsgate Films) Brandon P. Bell as Troy, the son of a college dean, in Dear White People

The title of the new film Dear White People leads the average mind to think, feel and question: What if there was a new film entitled “Dear Black People” in this era of President Barack Obama?

Prior to attending the premiere of this film, which is due to start Friday, October 24 at a theater near you, that question resonated through my mind over and over. As I approached the theater, I actually heard that question be presented amongst attendees and it made me feel not so strange or inept.

Dear White People revolves around Winchester University, a predominately White college that is in dire need of understanding and respecting others’ differences. The annual Halloween party is being planned by an all-White fraternity whose mission is to undermine the existence of Blacks in the school while masked at the party.

This movie is being billed as a satire about “being a Black face in a White place.” It is hilarious yet sensitive and provokes much thought. The themes in Dear White People already have led the film to receive much acclaim as a Spike Lee-type epic.

Starring Brandon P. Bell, formerly a Minneapolis resident, and Marquis Richardson, raised in Los Angeles, Dear White People was written and directed by Justin Simeon and received the Special Jury Award recently at the Sundance Festival. It was entirely filmed at the University of Minnesota.

Bell portrays Chad, the son of the university’s dean of student affairs who is a Black George W. Bush type of character. Residing in Minneapolis for eight years before relocating to Los Angeles, Bell says he loves this film because of its great humor and sees it as a great opportunity for him in his acting career.

Richardson, who plays Reggie and was the other actor who spoke with the MSR, said, “This movie, which in all has been a work in progress for seven years, we filmed at the University of Minnesota in 21 days. This has been my first visit to Minnesota and I love the food, the good weather, and the people.

“I feel honored to have such a role, in a movie that provokes conversation on uncomfortable topics. Being from Los Angeles, I love the clean air here as well. I have been warned about the winter weather, however.”

Dear White People also stars Tessa Thompson as Samantha White, who sets up a college campus culture war based on what it means to be Black, and Dennis Haysberth as the dean of student affairs. Tyler James Williams, formerly of the TV comedy Everybody Hates Chris, plays Lionel Higgins, an Afro-sporting, sci-fi geek writer being sought after by the White campus newspaper to report on Black students.

This movie is bound to get positive reviews with its strong storyline and very funny scenes. Go see Dear White People — it is very good with an ending you will not forget!