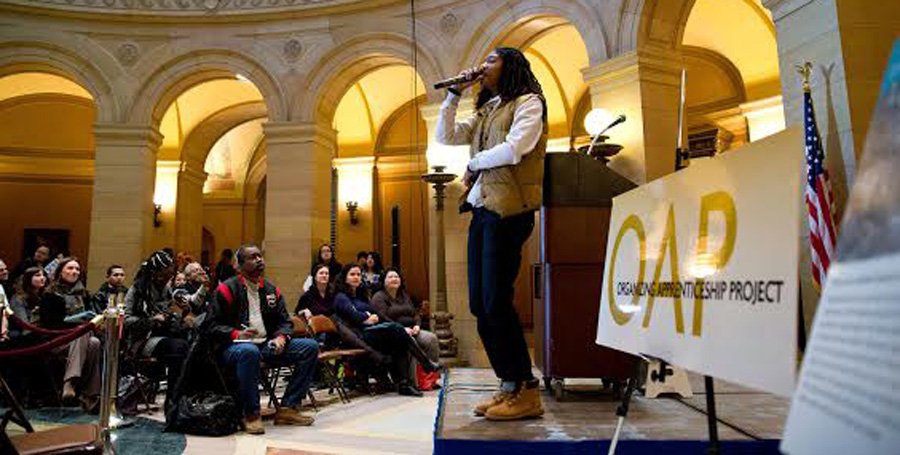 By most accounts, 2013 saw some promising action by the Minnesota State Legislature, such as passing the Dream Act and the Homeowners Bill of Rights. But with Minnesota at the bottom nationwide in terms of racial equality, there is clearly much work to be done.

To that end, last week the Organizing Apprentice Project (OAP) held the Racial Equity Justice Day at the Hill, an event that included a multiracial and multicultural mix of people and organizations — and that was attended by a few state legislators as well.

The purpose of the rally, said Vina Kay, OAP’s director of research and policy, was to “attend to unfinished business in 2014.” The rally began in the Capitol Rotunda and included speakers and spoken word performances.

Vina Kay delivered a stirring call to action, declaring that “We have some unfinished business” and exhorting legislators to “look to our communities for solutions; make ‘welfare to work’ a true ladder out of poverty”; invest in affordable housing; raise the minimum wage; and restore voting rights to felons who had served their time, among other priorities.

Pointing out that Minnesota has the largest racial equality gap in the nation, Kay asked, “How do we address disparities in Minnesota?” and declared, “It’s time for people of color to have a seat at the table.” Peggy Flanagan reminded the crowd that “there are people in this building who work for you.”

Jovita Morales, who addressed the crowd through an interpreter, told the group, “We need to call our representatives in government.” Nique Mabrey talked about Minnesota’s anti-bullying legislation, which she called the worst in the nation, and declared that “We need solutions, not supervisors; education, not incarceration.”

Nicole Buckanaga told the group, “People are still dying from racial injustice. People die every day for lack of human necessities,” and “we need to start asserting ourselves through political will.”

Noting some recently enacted legislation, Emilia Avalos said that we still “need to keep our immigrant families together. A better community is an organized community. Today we bring you solutions.”

A common theme throughout the day at the Capitol was a reminder to the crowd that “This is the people’s house.” OAP’s Brett Buckner closed with a call to action. Also in attendance were Minnesota State Representative Karen Clark and Senators Jeff Hayden and Patricia Torres Ray, who spoke with attendees after the rally.

After the rally segment of the event, the group was encouraged to meet with legislators to discuss issues of concern to communities of color, including:

A group led by Artika Tyner of the Community Justice Project at the University of St. Thomas School of Law visited with State Representative Raymond Dehn to discuss the issue of prison phone justice. Representative Dehn has now agreed to author a bill that will address this issue.

After the event, Vina Kay told MSR, “OAP will be releasing a Racial Equity Bill Watch mid-session that will list bills that we and our partners are paying attention to [regarding] the possible impact on racial equity. Following the end of this session, OAP will release a 2013-14 biennium Legislative Report Card on Racial Equity.”