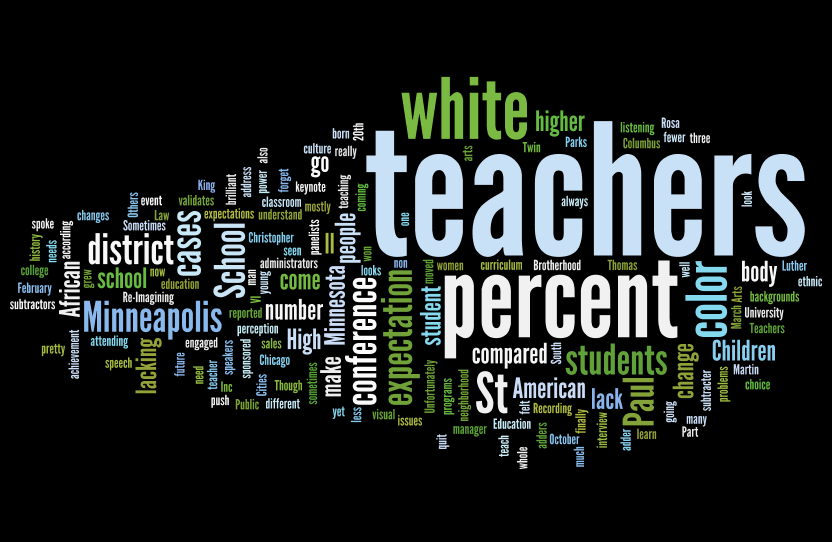 “Most of my teachers were white women,” said Sidiq Abdullah, a young African American man who is now a sales and event manager for Brotherhood, Inc.  Abdullah said many of his teachers didn’t understand what was going on in his neighborhood. “I didn’t really have teachers push me to go on to college,” he said. He also felt that his education about African American history was lacking. “Why do we always have to learn about Christopher Columbus? They teach us about Rosa Parks and Martin Luther King, but what about other people?”

Abdullah spoke at the “How are the Children? Part VI: Re-Imagining Public Education in Minnesota” conference sponsored by the University of St. Thomas School of Law on March 20th. Though he was born in Chicago, Abdullah grew up mostly in Minneapolis, and then moved to St. Paul when he was 14 before finally attending the High School of Recording Arts.

Unfortunately, as Laura Yuen reported in MPR, the future looks pretty white as well. Some 91 percent of teachers in teaching programs in Minnesota are white.

The lack of teachers of color, and the lack of curriculum that validates the culture of students from different ethnic backgrounds, are problems, according to a number of the panelists and speakers at the How are the Children? conference.

Dr. Verna Price, an author and motivational speaker who directs the Girls in Action and Girls in Real Life programs in Minneapolis and St. Paul, said in her keynote speech at the conference that teachers and administrators need to change their perception and expectations. “The higher the expectation, the higher the achievement,” she said. “When I come into Henry High school, I come in with the expectation that I’m coming into a classroom of brilliant people. I have an expectation that they’ll be listening, they’ll be engaged.”

Teachers sometimes forget, she said, how much power they have. They have a choice, between being an adder and a subtracter. Sometimes, they won’t make they change, and they quit. Others can make changes. “I have seen teachers go from being subtractors to adders,” she said.

“Students are sick of being saved,” said Aaron Abram, a board member of Scholars of Minnesota C.O.P.E. Project. “They don’t want to be saved. They want to be taught.” He criticized Teach for America, saying that while it may be a dynamic program, TFA is bringing in students who don’t understand the people that they are supposed to be teaching.

Rebecca Wade is a white teacher at Barack and Michelle Obama Service Learning Elementary working with students who are emotionally and behaviorally disturbed (EBD). Wades said she ends each day by journaling about her interactions with students. “I can’t go into the classroom thinking there’s something wrong with them,” she said. “Every single beautiful child is an asset to our school, to our community. Thinking about the 13 African American males that sit in front of me — How can I engage with them? What do I know about their experience?” Wade said that she dialogues with her students in order to hear about their perspective. She also does home visits.

Amber Bock, who works for the Northside Achievement Zone, and who was in the audience during the conference, said, “Teachers don’t believe in students. I tell my students, you’re going to achieve because you can. Until we have educators in the school who believe, I don’t think anything can happen. If we don’t have quality education programs and support, to support their belief in our black children, I don’t know how we can even start.”

Dr. Nekima Levy-Pounds, a law professor at the University of St. Thomas, said that one of the main challenges she faces is re-educating some of the educators. She said many teachers come from non-urban areas, without previous contact with students of color. “There’s a lack of awareness,” she said, “from what these communities experience.” She reflected back to a part of the discussion of one of the panels, saying. “What your comments are saying to me is that higher ed needs to be more pro-active with our teaching programs. What are you doing to address these on the ground issues?”

What’s being taught is not enough

Rebecca Wade believes that part of the problem lies in No Child Left Behind era policies. “My belief is that the tests are not asking the right questions. They have questions based on somebody’s perception of what the reality is. It’s not the whole story. They’re not asking students to critically think, but asking them to fill in bubbles.”

As a parent, Levy-Pounds said she is constantly supplementing her children’s learning so that they get the full picture.

Nancy Heitzeg, who teaches at St. Catherine’s University, said she hears many white students saying, “Why did I have to wait until I was at college to learn this? This is everybody’s history. This is U.S. history.” Heitzig believes not teaching about privilege means that racism or white supremacy is re-inscribed over and over. “Everyone needs to ask about the whole story,” she said.

Alex Leonard, who works for the Minneapolis School District, said he believes the community has a responsibility. “I see as an African American we are making progress at the table at the district level.” While there aren’t many black teachers, there are African Americans at the administrative level, including the superintendent. At a community level, “we’re responsible for outcomes we want,” he said. “How do change agents make an impact at that level?”

“We need more voices,” said Levy Pounds. “We need more people who are experiencing these issues. When we’re not being proactive we need to speak up.”