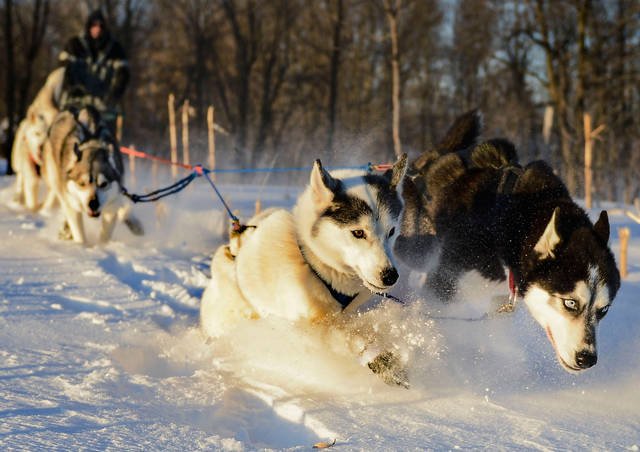 Dog sledder Joe Fessler treks through thick snow with his dogs to get to the main trail Monday evening in Chisago, Minn. (Photo by Bridget Bennett)

Joseph Fessler stepped outside without giving the minus 10-degree weather another thought.

He crunched through the snow toward the homemade dog kennels in his backyard, and as he drew closer to the gate, the howls and cries from five Siberian Huskies echoed off the Chisago landscape.

The dogs jumped up and down, pawed at the gate and ran back and forth between the fences in anticipation of Fessler’s arrival.

Gannon, an audacious 3-year-old with a thick black coat and white underbelly and legs, sprang up on his hind legs to greet his owner. A few of the other dogs joined in, and they all ran in circles with excitement over what was to come next.

Fessler takes his purebred team on training rides three to four times a week, even on days when most of the state’s public schools are closed due to extreme weather.

“Everyone wants to go dog sledding when it’s nice and warm out — except the dogs,” Fessler said. “They love the cold.”

Currently, Fessler and his dogs are training for the Subaru Dogsled Loppet, a 20-kilometer race on the last day of the annual City of Lakes Loppet Festival.

Spectators can cheer on the teams along the official race trail, which starts at Theodore Wirth Park, cuts across Lake Street near the heart of Uptown and ends on the northwest side of Lake Calhoun.

Fessler and his friend, Justin Hanson, led the dogs into a separate gated space where the sled and gear awaited them. Together, they worked like parents trying to get five rowdy children out the door in time for school. Each dog needed a harness and four black booties to protect its paws from snow and ice buildup.

Lupie, a slender 5-year-old with a white and black piebald coat, was bred to race and is all business. She harnessed easily and took her position at the front of the line without any coaxing, like the oldest daughter bundled up and waiting for her siblings to get their acts together.

Brr!, a white and red male with concerned amber eyes and a pink nose, didn’t cause any problems but let out a loud and continuous cry, telling Fessler and his brothers that he was ready to get going.

Gannon was the obvious troublemaker in the bunch. His ice blue eyes, full of mischief, flared as he rolled onto his back to avoid the harness. Eventually Fessler gave up trying to put on the booties and resorted to using a protective paw salve instead. After struggling with Gannon for a while, it was the best he could do.

The team is relatively well behaved compared to many other teams he’s seen at races, Fessler said. Siberian Huskies are a high-energy breed and training them takes extreme patience and dedication.

His dogs follow commands well — “haw” for left and “gee” for right — but Fessler said mushers never let go of their sled, for fear of the team taking off without them.

Once the team was harnessed and attached to the sled, Hanson opened the gate. Fessler released the sled from the fence, and the dogs took off without the need for his “Ready? Hike!” command.

Lupie and Gannon led the team down an ungroomed path that caused a bit of drag at first, but the sled moved smoothly once it hit the snowmobile trails.

The dogs followed the path, leaving little for Fessler to do except press his foot on a break pad that dragged through the snow to keep the line tight and the sled moving at a consistent pace.

Fessler transitioned from skijoring — cross country skiing with one dog — to sledding last winter when he went from having three dogs to six. Huskies are generally very social animals and the initial “gateway dog” will want a companion, Fessler said. Adding a third brings on a pack mentality.

“It’s like the Pringles ad. You can’t just have one,” said Fessler’s roommate Melissa Bloom, who also has her own team. “Going from two to 10 dogs happens really fast.”

Long distance races, like the Iditarod, require teams of 14 to 16 dogs. Bloom said most mushers have a few extra dogs to rotate through in case of an injury.

Fessler estimated that there are about a dozen mushers in the Twin Cities area alone and said Minnesota has one of the largest skijoring communities outside of Alaska. At least a dozen teams will compete in Sunday’s event.

“Dog sledding is fun because the dogs love it, too,” Bloom said. “You feed off of their energy, and they feed off of yours.”

Fessler’s team continued down the trail that cut through corn fields and a small forest as the sun set, casting fiery hues that transitioned to blues and purples near the eastern horizon.

The only time Fessler really needed to command the team was near roads with oncoming cars. Otherwise, Lupie gracefully and safely guided everyone over the fields and through the woods back home.

“You’re just along for the ride,” Fessler said, “And you’re grateful that they take you with them.”