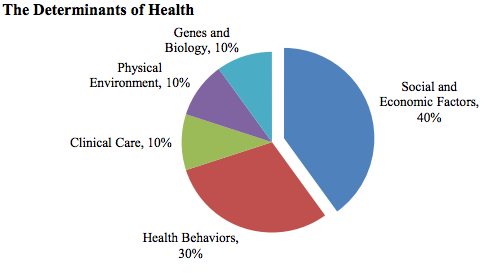 The graphic from the MDH report shows that social and economic factors are the biggest determinant of health - more than health behaviors, physical environment, clinical care, or genes and biology.

Dana Hays and her staff at Face to Face, a youth services program in St. Paul’s Payne/Phalen neighborhood, see the long term cost of health inequity every day. It is, she said, a cost that crosses generations and will continue to cause social and healthcare problems for decades unless something is done, soon.

Hays told of a pregnant teenager who came in to Face to Face to find help. “She was homeless and the father of the baby was in and out of jail. She didn’t have any family support, which is a very common thing with these young women. There was no one to help her through this,” she said. Her inability to find stability kept her from finding prenatal care. She received help from Face to Face, but it came late.

“As a consequence, she ended up delivering her baby too early. The baby was in intensive care and although she stayed with it around the clock, the child has developmental delays. This is the real consequence of health disparities.”

Many past programs have focused solely on a medical model – getting people to find and access medical care when they need it, but not addressing underlying social problems. According to Advancing Health Equity in Minnesota, a major report released by the Minnesota Department of Health and presented to the state legislature, the major cause of these inequities is structural racism.

“There’s a difference between racists and structural racism,” said Jeanne Ayers, the Assistant Commissioner for the Minnesota Department of Health, who co-chaired the committee that wrote the report. “Racism is fueled by intent. This is more agnostic. To understand, you have to ask what creates more opportunities for those who are white and those who are not.”

“We have a term for this,” said Ayers. “It’s called the social determinants of health. These are the things you have to have to be healthy and it affects the decisions we make about policies. It can determine where we put garbage burners, bus stops, where the liquor store goes.”

Ayers admitted that the term structural racism could be seen as controversial. “Even members of our own staff said, ‘It’s not about race, it’s about income.’ I wish this was true – it would be easier. But when you look at the data, more white people are doing better even when adjusting for income.” Only by improving ways to identify structural racism and other structural inequities can Minnesota improve overall health among all populations, she said.

Clarence Jones, Outreach Director for South Side Clinic in Minneapolis, works the front lines trying to get people connected to clinics where they can get proper health care instead of relying on emergency room visits, but said that even in public health, structural racism can cause problems. Some of it comes from many black people’s fear of doctors and clinics, he said.

“People hear myths about medical services and for a lot of people, low expectations about health care is based on experience. A black person will walk into a doctor’s office and automatically be prescribed high blood pressure pills.”

“Then there are problems with transportation. People don’t know where a doctor is located and then can’t get there. They don’t have access to good food or a healthy environment,” he said.

Much of structural racism has its roots in historical racism. Take, for example, the G.I. Bill. At the end of World War II, the G.I. Bill offered home loans to returning veterans, but purposely restricted access of black veterans. Other mortgage loan programs used restrictive underwriting, making it harder for minority groups to get loans. Neighborhoods were red lined, barring people from certain racial or ethnic groups from whole neighborhoods, helping create ghettos.

As a result, even today, while 77 percent of white people in Minnesota own their own homes, only 26 percent of black people do. The disparity was exacerbated by the recent housing crisis, when people of color were much more likely to be given sketchy loans and banks were disinclined to renegotiate. Families lost their homes to foreclosure, crowding into smaller and smaller apartments, and the rents rose as demand increased.

Frequently changing home locations can create mental and physical health problems for children, an increased risk of teen pregnancy (like the woman and her disabled child at Face to Face,) poor performance in school and subsequently, problems accessing stable health care.

What happened in 1945 has consequences in 2014. Similarly, “The decisions we make now,” said Ayers, “will have consequences far into the future.”

“Sometimes, it’s that we’re just not paying attention because these inequities are not directly affecting us,” she said. “Across all political viewpoints, people don’t want health disparities. They ask us, ‘how do we fix these problems?’ If you say that people just have to have better, healthier habits, that won’t fix anything. But, it’s urgent that we make the link between health and broad policy decisions to assure health for everyone everywhere.

“We don’t have a choice,” Ayers said. “We have to do this. It’s going to take people working in communities and state agencies working together. [Governor] Dayton’s cabinet is meeting about this in April. That’s a first step in creating opportunities for health and to create strategies and investments in areas like housing, transportation, and in early childhood education. We have to create more accountability across levels of government, but government is just a piece of the puzzle. This is a complex problem and requires complex strategies. If we make the link between health and broader policies we can begin to make decisions that assure health for everyone, everywhere.”