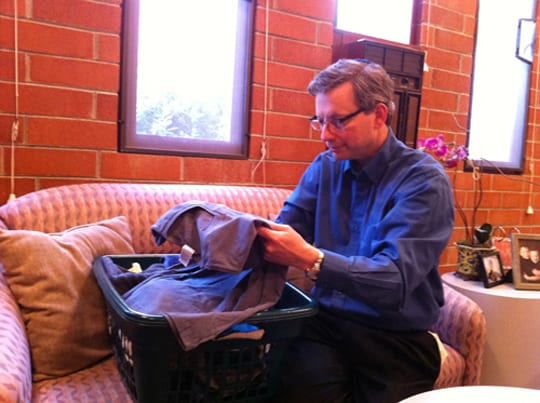 Several years ago, I was talking with my rabbi when he said he wished he had more kids, because then there would be more people to help with the laundry. The first thing that popped into my head was, “Rabbis don’t do laundry!”

Of course, this is a ridiculous thought. Rabbis are human beings, and although it’s possible that some old-fashioned rabbis think doing laundry is beneath their dignity, I’d say those rabbis are more the exception than the rule. In this particular case, the thought was even more off base, because this rabbi’s wife is also a rabbi. So if rabbis don’t do laundry, that eliminates everyone over the age of 10 in their household.

I pride myself on being non-hierarchical, seeing people as human beings first, rather than seeing them as their title or profession. It was quite surprising to me, then, to find such a thought popping into my head.

For 15 years, I managed credit card call centers. There were several reasons why I gradually came to hate my job, but one of them was that the further I rose in the management ranks, the less the workers treated me like a human being, and the more they saw me as just “the boss.”

Over time, it became clear that many of them made certain assumptions about me and my motivations based simply on my job title, rather than on my actions. When my actions conflicted with their pre-conceived notions, they were surprised. Sometimes, instead of adjusting their view of me, however, they chose to ascribe my actions to other, less kind, motivations. It seemed they weren’t interested in revising their view of me to allow for the possibility that I might be a regular human being.

We all have a tendency to take whatever feelings we have about our parents and assign those feelings to any authority figure with whom we come into contact. If we feel our parents were overly controlling, for example, we tend to feel that way about the police, the person at the airline check-in counter, and our rabbi.

It’s terribly unfair and dehumanizing, and after spending so many years on the wrong side of assumptions about authority figures, I was determined not to do the same thing to other people.

Of course, the rabbinate, to some extent, has done this to itself. In the early days of Reform Judaism, for example, rabbis wore black robes and made dramatic entrances at services. They stood on a high bimah overlooking the congregation, separating themselves physically and, perhaps, spiritually, from the greater public.

Over time, the trend among the Reform rabbinate has been to more closely align with my rabbi’s preferences. The average height of the bimah has come down, rabbis wear robes infrequently, and often they stand on the same level as the congregation, sometimes even walking among us during services.

Yet old habits die hard. So although it has been several years since a thought like, “Rabbis don’t do laundry” has popped into my head, I still make a conscious effort to see rabbis and cantors, and other potential authority figures, as humans first.

Like much in life, of course, it’s a balancing act. Even though 99% of the time I want my rabbi to act like a person first and a rabbi second, every once in a while, such as when we’re writing a handbook about how to make advance preparations for death, and something comforting needs to be written, I want him to be a rabbi. And he truly is an exceptional rabbi. Of course, a large part of why he is such a great rabbi stems from his willingness to be so utterly human.

I wonder: How do you see your rabbi?