Why has Lowry Avenue Northeast been torn up for most of the summer? The current work is for Qwest/Century Link, “a little bit of everything,” project manager Dan Lennartson of Mas Tec, the contractor, told the Northeaster. It’s a trunk line serving the whole Northeast area, from which cables come out and provide their various services.

Because it’s communications, and not water or gas, the lines can be buried shallower than the frost line. Old clay conduits in the same area “were destroyed, full of dirt. We’re also rebuilding some manholes,” Lennartson said, temporarily disabling at least  part of individual intersections while that rebuilding takes place.

In the photos above and below, note the trench that’s been cut is just barely the width of the excavator’s bucket, and heavy metal plates allow cars to drive over the otherwise open trenches at intersections and for driveways until the trenches can be refilled. 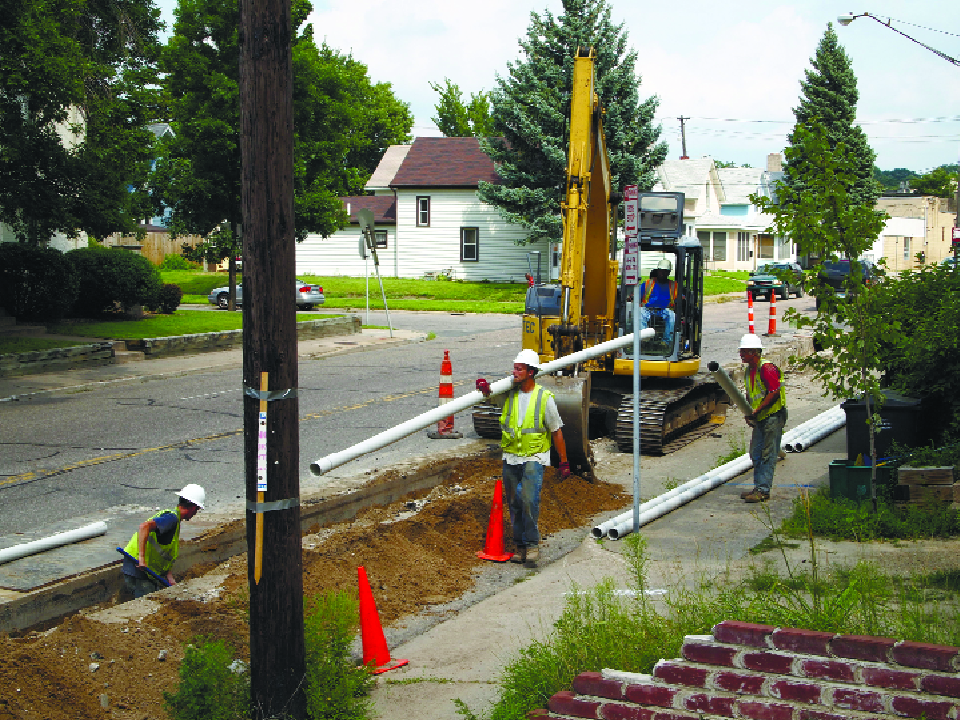 This project stretches from about University Avenue to Buchanan Street NE, along Lowry. “They’re pushing, getting close to Central. Trying to get to Central this week.” They started July 18, Lennartson said, and they expect to finish by Aug. 20 when Hennepin County plans to mill and overlay (resurface) the entire roadway from University to Stinson. “It’s why we’re working weekends,” Lennartson said. The summer’s rains have affected them “a bit.”

Lowry is “a very busy road,” but with a lot of traffic already detoured because the Lowry Bridge is out, this “tough build” has been a bit easier than predicted relative to traffic management.

If it seems like they’ve been at it all summer, there was actually a different project that tore up part of Lowry earlier between Central and Jackson June 16, now complete.

That project, by the City of Minneapolis, involved a combined sewer overflow (CSO) project, “Area 097” and a rain leader disconnection “RLD 019,” which removed storm water flow that used to discharge to the sanitary sewer system.