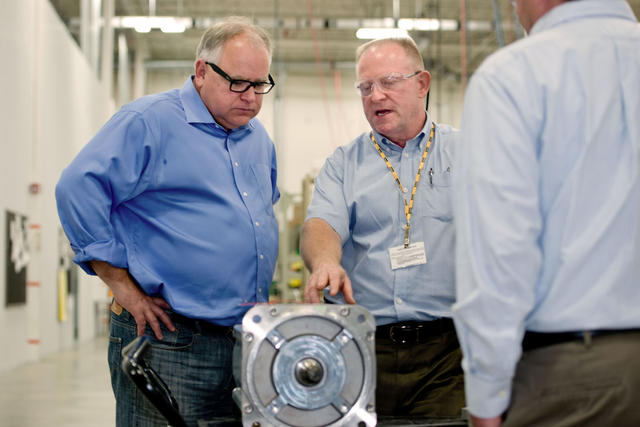 “There are tons of small towns — everyone knows each other, and everyone feels connected to one another,” said Trehus, a political science senior at the University of Minnesota.

Although Trehus lives in Minneapolis during the school year, he’s planning on voting absentee in his hometown and Congressional District 1.

In the southern strip of the state known for agriculture, health care and education, Rep. Tim Walz, D-Minn., and Republican challenger Allen Quist are squaring off to represent the district in the U.S. House of Representatives. choose whether to vote in their home district or their newly adopted district in the Twin Cities.

“I live here now, and basically I don’t consider myself a resident of La Crescent anymore,” she said.

But for some students, the tie to their hometown draws their vote.

“It’s my hometown, and it’s my family, and I know a lot of people who live there,” said Sean Laurie, a biomedical engineering freshman. “It’s where I feel most compelled to help out.”

Trehus volunteered with Walz’s campaign in 2008 when he was still in high school and returned in summer of 2010 after his freshman year of college.

Trehus said there aren’t many young people or Democrats who are politically involved in his hometown.

“The Democrats who are active make a lot of the decisions,” he said.

“Being involved back home, you have way more influence than if you were to be involved up here.”

Walz previously taught geography at Mankato West High School. He also served in the Army National Guard for 24 years, including a deployment in Europe from 2003 to 2004.

“I just kind of got to the point in my life where I felt that our politics were veering into the all or nothing, the very divisive,” Walz said.

“I decided and thought that maybe I could make a difference.”

Walz serves on the Agriculture, Veterans’ Affairs, and Transportation and Infrastructure committees in the U.S. House.

Walz’s district has been historically Republican-held.

“Congressman Walz presents himself as more of somewhat of a moderate who can appeal to Republicans as well as Democrats,” said Joseph Kunkel, a political science professor at Minnesota State University-Mankato.

Quist, a farmer and retired political science professor, is challenging Walz and running on two main concepts: balancing the budget and developing a plan for our country.

“I have 38 grandchildren as well as 10 children, and I see the opportunity of the American dream being diminished,” Quist said.

Quist was elected to the Minnesota House of Representatives in 1982 and served three terms.

He has since been a part-time political science professor at Bethany Lutheran College as well as a state chair for three presidential campaigns.

Kunkel said although Quist is running on an economic platform, he’s largely associated with social, sexual and religious issues — “the culture war.”

“I think he’s a little too far to the right to fit our district down there,” Trehus said.

Fred Slocum, an associate professor of political science at MSU-Mankato, said Quist has a history of “incendiary statements.”

“I think Quist probably has less room and maybe more prospect for alienating moderate and independent voters than Walz does,” Slocum said.

Allen Quist poses in Mantorville, Minn. on Sunday morning after participating in a city parade. Quist is running against Rep. Tim Walz this fall to represent the 1st congressional district. (Photo by Blake Leigh)

In the largely agricultural region of the first district, the farm bill has surfaced as an important campaign issue.

Quist, who runs an 800-acre farm of corn and soybeans, is pushing for renegotiation of the farm bill, largely due to the high inclusion of food stamps.

Walz, however, is pushing for the bill’s passage.

Although Walz doesn’t agree with every aspect of the bill, he emphasized the need for compromise and the farmers’ desire for certainty.

“The farm groups are all saying they need the farm bill passed,” Kunkel said.

Laurie, a freshman, said there aren’t many huge issues he sees facing the region, but education funding and infrastructure warrant attention.

“A lot of roads in the area are kind of falling into disrepair. Country bridges are falling apart,” Laurie said.

His younger brother is in middle school, so education is a “big deal” to Laurie’s parents, he said.

More than half the school district qualifies for free and reduced lunch.

“Any reductions at [the federal level] would really, really affect the Austin School District,” Krenz said.

Trehus said the district is “pretty moderate” and “much more politically diverse” than Minneapolis.

Laurie said people aren’t very overt about their politics.

“People tend to stay out of politics,” he said. “It’s not too hostile.”

“I think we’re an area that is conservative in how we go about our jobs and our work,” Krenz said, “but also very open to helping and working with others,” Krenz said.