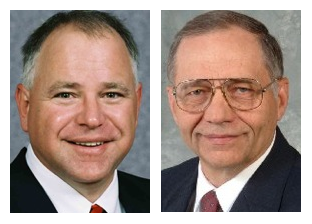 Allen Quist has been largely out of the political spotlight for roughly a decade. But according to a recent report on Bluestem Prairie, the conservative Republican is mulling a run at U.S. Rep. Tim Walz in the First Congressional District.

Reached at his home in St. Peter, Quist certainly didn’t shoot down the possibility. “I’m not ready to comment on that,” he told the Minnesota Independent. “If I’m in a position to comment, it won’t be very long. That’s a big if.”

Quist served three terms in the state House and was the GOP-endorsed candidate for governor in 1994, but was handily beaten by Arne Carlson in the primary election. A darling of cultural conservatives, Quist sought the Republican endorsement again in 1998, but dropped out before the state convention in favor of Norm Coleman. Since then he’s worked with EdWatch, a conservative advocacy group that has championed home schooling and criticized public school curricula, and taught at Bethany Lutheran College.

Walz is currently serving his second term, winning re-election last year by 30 percentage points. The contest doesn’t make the cut for most lists of potentially competitive House races for 2010. Historically, the southern Minnesota district has leaned Republican, and the Cook Partisan Voting Index rates it +1 for the GOP, but Democrats have enjoyed considerable electoral success in recent years. Walz initially won the seat by knocking off six-term Republican incumbent Gil Gutknecht.

There are no announced challengers for Walz yet. Another name that’s generated a lot of discussion: state Sen. Julie Rosen.

Steve Perkins, chairman of the GOP in the first district, says that others are eyeing the race as well, but he declines to name potential challengers. “Clearly there’s a lot of interest in it,” he says. “We’re certainly going to have a number of very strong, electable candidates. Allen may be one of those candidates.”

Perkins argues that Walz is out of step with the district on a number of issues, including his support for cap-and-trade legislation, the federal stimulus package and health-care reform. He doesn’t believe that the Democratic incumbent’s landslide victory in 2008 means that he’s not vulnerable.

“Why don’t you call on Gil Gutknecht and ask about winning by wide margins?” he laughs. “The horizon in 2010 is going to be infinitely different than what it was in 2008.”