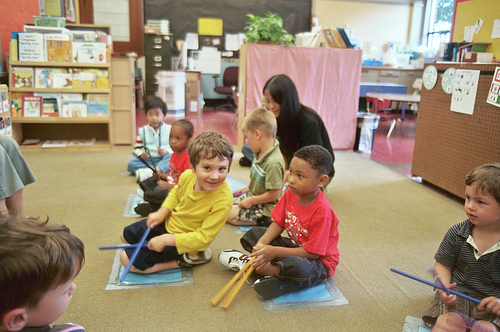 Photo by CafeMama. Published under Creative Commons license, some rights reserved by cafemam

How do varying cultural backgrounds affect the need for and the value of early education? What we’re missing, said Betty Emarita at a February 8 forum on early childhood education, is data driven discussions. While there’s data on community trauma, “there’s little data on family strengths, especially in low income communities.”

Betty Emarita grew up in a tiny village in North Carolina, which had a combined elementary, junior high and high school. It was a very poor area, and the African Americans living in the community were mostly farming as sharecroppers. “Most girls dropped out of school by the eighth grade,” she said.

Emarita’s mother was the youngest of a blended family of 18.  Emarita’s grandmother and grandfather each had six children before they formed a family together, and then had six more. Emarita talked about the intricacies of her large family. On her mother’s side, education was important but school didn’t necessarily have anything to do with that.  Laws were considered suggestions, and she learned to think outside of the box, or that there wasn’t any box. On her father’s side, if you didn’t talk about your accomplishments, you were ignorant.

Emarita drew on her own experience as well as her research work with the Wilder Foundation, which focuses on family and community knowledge sytems in discussing culture and early childhood education. She talked about intergenerational learning, which provides continuity and social cohesion that holds families and communities together. That intergenerational learning is “the very fabric of human society,” she said.

She recounted anecdotes of people she has met who have made great socioeconomic leaps from one generation to another. For example, one young Hmong woman who was valedictorian of her class had a grandmother who was uneducated. A California woman was a widow, a farm laborer who immigrated from Mexico, and lived in a small house next to a huge strawberry field. She had six children, two who graduated from college, two who were in college, and two who were in high school and doing very well. “What did she know about social and emotional intelligence?” Emarita asked. And while these types of stories are not uncommon, she said, they are framed as anomalies.

As part of their work with the Wilder Foundation, Emarita and Richard Chase held dialogues within cultural communities, talking to groups such as Hmong, Anishinabe, Norwegian, Swedish, Somali and Laotian groups. “We wanted to find out how family systems operated,” she said. “What was important to them?”

“In no way is it meant to imply participants did not value formal education,” she said. “Participants were taking a longer, broader holistic view. They weren’t viewing children through third grade reading scores and math scores. This is not an either/or choice.”

Early childhood education has become a hot topic, with both President Obama and Governor Dayton pushing for increased funding. This comes as a relief for many educators, who have been saying for years that children’s needs must be addressed before kindergarten, with study after study showing the positive effects of quality early childhood care and education. But how we judge what constitutes “quality?” And how we address specific needs of communities of different socio-economic and cultural backgrounds?

Prachee Mukherjee,Director of Assessment, Evaluation and Research with the St. Louis Park Public Schools, sent in a link to an article from The Future of Children, which surveys research on early education in different countries. Mukherjee also raised a point about cultural differences: “I have re-learned that many traditional cultures do not seek out pre-school because they want to maximize those years for parent-child bonding, or mother-child bonding,” she wrote. “For immigrant cultures it also becomes a way to immerse the child longer in their mother tongues.”

Patti Loftus, from Blake School, suggested the text Beyond Quality in Early Childhood Education and Care, by Peter Moss, Gunilla Dahlberg and Alan Pence, and provided an excerpt from an article by Dahlberg and Moss, which they say addresses not the management of quality, but the “very concept itself.”  They argue that quality is “neither natural nor neutral” and treat evaluation “as primarily political rather than technical.”

Emarita’s speech, and the contributions of people made through social media struck a chord for me. Though I don’t have children myself, sometimes I get suspicious that the emphasis on preschool education seems to undervalue what parents (and their family networks) can offer their children. Part of me thinks that for very young children, it’s better for them to be at home rather than a daycare facility (although I agree that pre-school is important.)

I do see how two and three-year-old children might benefit from being in a social setting with focused care by an adult. My sister, who’s a teacher, chose daycare both because she wanted to go back to work, and because she felt her children would be more stimulated in a daycare environment then they would at home. When I taught dance classes for three-year-olds, I saw that after just a few classes, they were talking and being more social.

On the other hand, different families will have different needs and goals. Each family has to balance different factors, such as work, the desire to teach young children the family’s own cultural traditions and access to quality preschool programs.

This is the first of a series of articles I’m writing about Early Education. In the coming weeks, I’ll also be writing about how much day care workers and pre-school teachers get paid, ratings systems for Minnesota’s Parent Aware program, and looking into the “catch-up” effect for students who don’t receive early education. Please write in if you would like to share your thoughts about early childhood education, either in writing or in a conversation with  me. I can be reached at Sheila@tcdailyplanet.net.