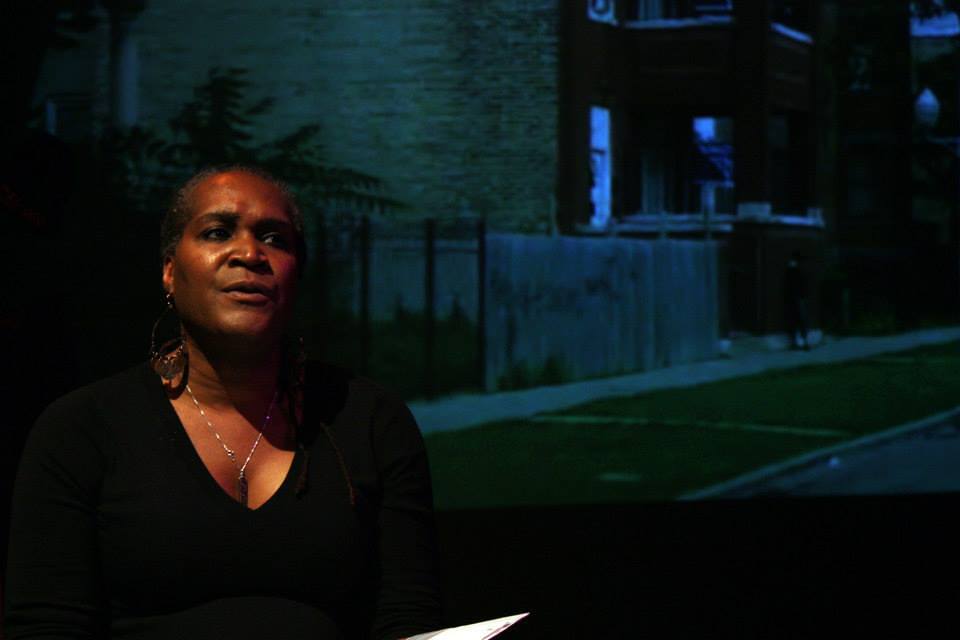 Trans artist and activist Andrea Jenkins whose Body Parts: Intersectionality is part of Set A in 20% Theatre Company's Q-Stage.

When a theater company puts together a new works festival like 20% Theater Company is doing with their second year of the Q-Stage program, the results can be a mixed bag. In its inaugural year last year, Q-Stage had some really polished powerful work on display. It also had some things that were sweet alongside some things that were riotously funny. And it had some things that felt more like works in progress that sometimes made me smile and other times had me scratching my head in confusion. It’s great to have an incubator for local artists and new work with a queer sensibility like Q-Stage. But you have to approach it with the knowledge that these are theater pieces still under construction. Some may be farther along in their journey than others. Some artists need to put something on its feet in front of a crowd in order to know what’s working and what’s not. Thankfully, with Q-Stage, the artists get an audience that is underserved in seeing themselves portrayed onstage. So any storyteller that wants to tell them a story has a set of spectators ready to listen and rooting for them to succeed.

“Heavenly Father, we don’t know how this happened to a good Christian car?”

Set A in this year’s Q-Stage is still working out some of the kinks but there’s some fascinating toying with structure going on in the storytelling here. The opener for the evening, The Escape Machines, concerns the long eccentric life of the last Buick Regal painted by human hands before the robots took over the assembly line. The Buick was painted a vibrant purple, and over the course of its peculiar journey from factory floor in 1979 to the junk yard of 2015, it passed through many hands, nearly all of them lesbian. Creator-performers Elyssa Joy Kilman and Emily Zimmer, in collaboration with playwright Basil Kreimendahl, have assembled a series of 10 vignettes that span the 36 years of the car’s existence. The acting is purposely broad and brash and loud, and the humor is pointed. The costumes are equally outlandish. The car is a ramshackle assemblage of purple-painted cardboard that you can’t help but find endearing (and it isn’t all low tech, it has functioning tail lights and headlights in the mix). It’s an intriguing conceit, taking something as quintessentially American as the automobile and giving it a queer twist. Kilman and Zimmer portray everyone from young slackers to elderly lovers; with noteworthy detours into satire through a pair of aerobic exercise competitors, and even an uptight (and hilarious) cameo appearance by Anita Bryant.

“Is that what Olivia Newton-John said to herself? Or Harriet Tubman? Or Neil Armstrong?”

The only thing that left me wanting at the end was the desire that the whole of The Escape Machines be something more than just the sum of its parts. The individual parts are all entertaining in their own offbeat ways. But they ultimately don’t add up to any sort of broader statement – either about America or the queers within it. Maybe its enough that you’re taking the myth of the American car and turning it on its head by putting it in this context, but the performers involved were so over-the-top ballsy about it all that I ended up expecting more from the story in which they lived.

“When I was in sixth grade, I dressed up as a girl and walked around the neighborhood for the first time.”

I have similar mixed responses to Andrea Jenkins’ piece Body Parts: Intersectionality. Jenkins is a force to be reckoned with, both as an artist and an activist around trans causes. If she wants to stand on stage and read passages to me from Ta-Nehisi Coates’ essay The Case For Reparations, I’m all in, no question. Body Parts: Intersectionality is a mix of video and poetry and personal narrative and lecture. Jenkins’ window into her early childhood and her own burgeoning sense of her true self, in the larger context of Chicago and its schools split along lines of race and class, is never less than compelling as a narrative. The story itself is fascinating. The way the story is presented is sometimes less powerful than the subject matter. Again here, there doesn’t appear to be anything driving the story forward toward any sort of end point. Certainly neither Jenkins’ life nor work are over, but stories, and lives, can be divided and shaped into distinct narratives. In the current presentation, the piece wanders with no apparent hurry from one style and story

to the next, with no real sense of urgency behind any of it. Maybe the artist here just wants to lay out all the parts of the puzzle and get a feel for them and how they might fit together before really polishing them up and juicing them with a little more energy and force.

“Visibility is the key to changing the narrative of this poem.”

In both cases, maybe a director not in the middle of the process of performance but one with a genuinely outside eye on the process might have served to push these works to the next level that their creators are clearly capable of. But when the work is still under construction like this, I can understand the reluctance to turn it over to someone else too soon. Sometimes you don’t know what it is until you live with it a while. Sometimes your best collaborator is just trusting in yourself. This iteration of The Escape Machines and Body Parts: Intersectionality makes me want to see more. And maybe that’s enough.