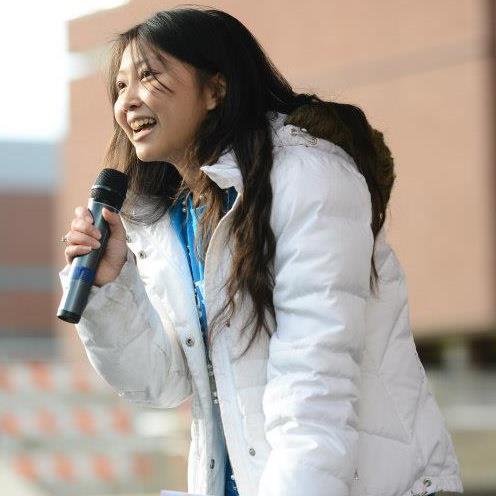 Chilli Lor considers herself an artist activist. A student at St. Catherine University, she is active in the spoken word and hip hop scene in the Twin Cities, and also active as an organizer while she pursues her double major of sociology and critical studies of race and ethnicity. Born in Thailand’s Chiang Kham refugee camp for Hmong refugees in 1992, she moved here in 1994 with her family, and grew up on the east side of St. Paul, attending J.J. Hill Montessori, Prosperity Heights, and then Central High School. Here’s a conversation with Lor about how she has learned to merge her talents as an artist and her passion for social justice, about her Catholic and Hmong background, and about discovering the inner feminist inside of herself.

Why is social justice important to you?

My faith is really my background- in giving to charity, giving to one’s neighbor, but the term social justice did not really come to me until my senior year of high school.  I was part of a program called Synergy, a social justice performing arts program. It’s a program in the St. Paul district that’s available at certain schools. I always knew I had artistic ability, and Synergy was really the place where I explored my gift of spoken word, of rap, of poetry, because each semester at Synergy, the participants at Synergy get to choose their own issue . For example my first time joining it, our issue was youth runaways. That was where I was able to combine art and social justice together, and that was really my first discovery, and I continued to follow that path that path at St. Kate’s.

What made you decide to come to St. Kate’s?

I was attracted to the fact that it was liberal arts, but the interesting thing is- it’s ironic, because I did not want to come to St. Kate’s before this. I was like — why would I want to come to an all women’s school?   I couldn’t imagine a whole college that only had women. But when I came here, I realized I had a feminist side all along.

When I look back, I realize my culture was still patriarchal. Sometimes in the Hmong culture- my parents would emphasize the need for me to do chores more than brothers because they say that one day I’m going to get married, and so I have to “train myself” so than my in-laws would like me.

Well, of course I was a bit rebellious.  I was like “No. I think there should be fairness, and that my brothers should be as responsible as I am in the household.”

And then when I came to St. Kate’s, I was really amazed at the stories of the chapel and the stories of Mendel Hall. She was told that the chapel would be built at the bottom of the hill, but she chose to build it at the top of hill anyway. Her brother was the Archbishop at the time, the one who founded St. Thomas.  And he said, no, you are not building at the top of the hill, but she chose to anyway.

What kinds of projects are you involved with currently that have to do with social justice?

I first started doing community organizing when I was protesting against the KDWB song about the Hmong people.

The summer after that I had an internship with Take Action Minnesota.  I made a community forum for the Hmong community to discuss the light rail. That was really my first time seeing the Hmong politics work. The Hmong community is so interconnected with each other.  Whenever you want to push a social justice agenda and get people to participate, you have to know who are your community leaders, and who the elders are.

Did you experience difficulties as a young woman with the patriarchal culture you mentioned earlier?

The community has made a lot of progress.  There have been a lot of Hmong women before me that have stepped up to leadership positions.  Our first Hmong Senator was a woman, Mee Moua, and Kazoua Kong-Thao, the St. Paul School Board Chair, and Bao Vang from the Hmong American Partnership. It’s interesting how in the Hmong community, there’s more Hmong women going to college than Hmong men. Studies have shown that with the lingering patriarchal society, through education, women can liberate themselves and have a better future.

Another campaign I worked on was Justice for Hmong Veterans campaign with Take Action, for Hmong veterans who fought during the secret war. That’s when I realized that to be able to connect to Hmong veterans who have high status in the community, I have to connect with someone they respect. So once I got the right connections and was able to connect with them, I found out that one of the veterans goes to my church. All these years, I didn’t know we went to the same church. And my grandfather is a veteran. And so now I know at least one Hmong veteran, whenever I go to any social event — like Lao Family, if somebody recognizes me, then automatically I’m someone that they feel that they should listen to.

I should also say that one of my self-interests is to connect the older generation with the younger generation, because in the Hmong community, there is a generation gap because of assimilation and because young people start losing the language and the cultural values.

Through my art, I try to connect to younger people to remember the sacrifices elders made, and for elders to know that our young people are really progressing.  Even though they had assimilated somewhat, they still care about their parents.  It’s just that they’re in a fight to find their own identity as a Hmong American.

What kind of art do you do?

Where do you perform?

I perform at community events, like the White Privilege Conference in 2011. I performed at the Black Dog Café, for the St. Paul Almanac Series, curated by Tou Saiko Lee.

I’m part of spoken word group right now called Speakers of the Sun. It’s an all Asian spoken word group, founded by Tou Saiko Lee. He was my inspiration for spoken word, and continues to be a mentor for me. I met him in sixth grade at Prosperity Heights. He came to my classroom, and he was the first Hmong poet that I met. I didn’t meet him again until my junior year in high school. I came upon this song called 30 Years Secret — it was a rap and it was about the Hmong people that were still stuck in the jungles of Laos. It was on a compilation CD. The lyrics really struck me. It was really a beautiful melody.  One of the verses was “Their blood spills over the rice fields, their tears was enough to flood the Mekong River,” I shed tears after I read it because it was so moving to me, to hear about my Hmong people’s experience. I was rapping at that point, but it wasn’t until I heard that that I was open to a new genre of hip hop, talking about my Hmong American experience.