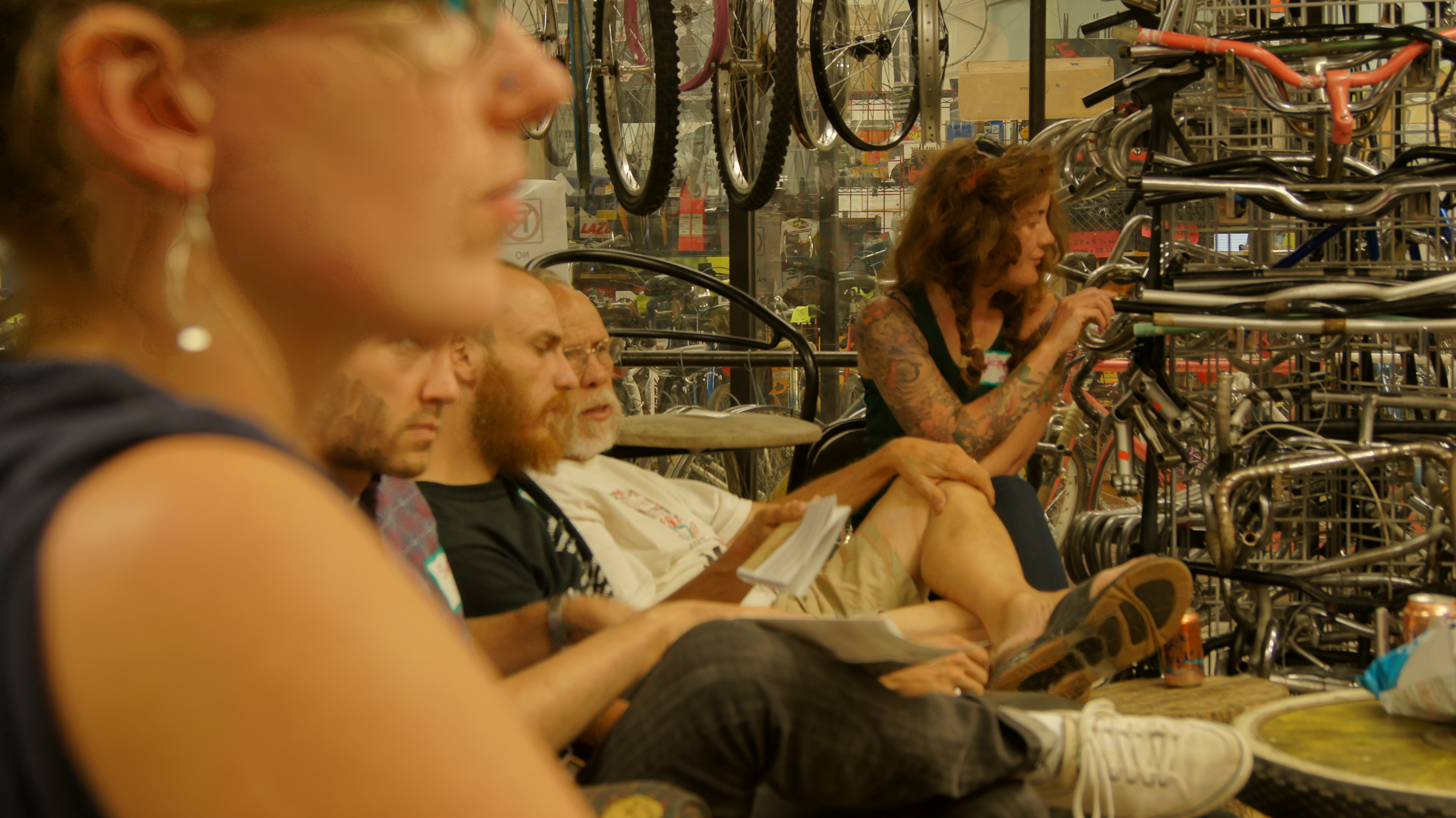 Though most of the participants in the Community Conversation at Transit for Livable Communities were people involved with TLC, they agreed that transportation decisions do not mean a choice between non-motorized bike/walk transportation, automobiles, and mass transit (buses and trains.) That’s a “false trichotomy.”

“We must have all three,” said a participant. “Cars are not going away.” Instead of talking about abolishing cars, participants emphasized the need for choices and options, and the importance of weighing all the costs in decision-making. Decisions to build more roads, for example, mean commitment to paying for road maintenance in the future. While highway improvements are needed, there’s also a need for investment in public transit.

Education is crucial, said another participant, but both advocates and policymakers need to be careful not to use “education” to mean “I have the facts and I’m going to give them to you.” Instead, we need open questions and discussion of outcomes of policy choices, including the racial and economic disparities of those choices.

The bottom line is the discussion should be about people and “not about this really sweet system we can build.”

Race and economics also continue to be key factors in transportation decisions. “There’s not a major metropolitan area in the country where middle class and upper middle class people use buses,” said one participant. “They use trains and cabs, but not buses.” That’s one reason for building light rail — middle class and upper middle class people will use it, even though they don’t use buses. That gets more people on public transportation, but it may short-change the lower-income people who rely on buses and who may be displaced by light rail. Historically, issues of race and poverty have played out in the transportation arena, from Plessy vs. Ferguson to Rosa Parks and the Montgomery bus boycott to white flight to the suburbs, and the attendant emphasis on highway systems.

While participants mostly avoided focusing on the Central Corridor (which raises a whole set of questions and answers and arguments), they observed that transportation questions are part of bigger questions about who a neighborhood belongs to. Central Corridor and Transit Oriented Development raise fears of small businesses closing, or gentrification of neighborhoods “with a Starbucks on every corner.”

Decisions need to be based on putting people first. One participant noted that his transportation situation is the same now as when he was a child. Then there was one driver in the family, and it wasn’t him, because he was too young. Now there is one driver in the family, and it isn’t him because of visual impairment. The difference: when he was young, there were more buses and streetcars and he actually had better mobility than now. The transportation infrastructure has deteriorated.

The Community Conversation at Sibley Bike Depot focused on the bike side of the transportation equation, and the tone was somewhat celebratory and hopeful.

“How did you get this incredible culture in the community?” asked Steve Clark at the Community Conversation at Sibley Bike Depot. “Early on there was a group of people in the early 80s [who] envisioned bike culture like this. Somebody had a vision. We had an advocacy group that got the city to do the city plan. … You gotta start somewhere.”

Participants talked about peer pressure to start riding, and one spoke about a mushrooming Wednesday night ride at Central High School. Bike riding is not comfortable everywhere in the city, but it’s getting better.

As Clark put it, “It’s gotta be fun. Ultimately that’s why we’re here. You remember that sense of freedom, and it’s fun. … We’re trying to empower people, it’s okay to be in the orad, and you have the right to be in the lane.”

Participants agreed that biking responsibly was important, and that there is growing respect for bikers and more attention paid to signals, and to watching out for pedestrians.

Biking is for more than fun. Emma, who works at the bike library at Sibley, recalled: “There was this one guy named Shawn with his daughter on the back of his bike. He had filled out a work form, and it had a box, and it said, ‘check here if you have transportation to work.’ He was all happy and had a smile on his face, and said, ‘Well, before Sibley, I would have had to check no, but I got to check yes!'”

Participants also considered the need for adaptive bikes for “someone who is 70 years old,” and talked about adult trikes in Denmark and “tons of 70-year-olds and 80-year-olds” on trikes and bikes.