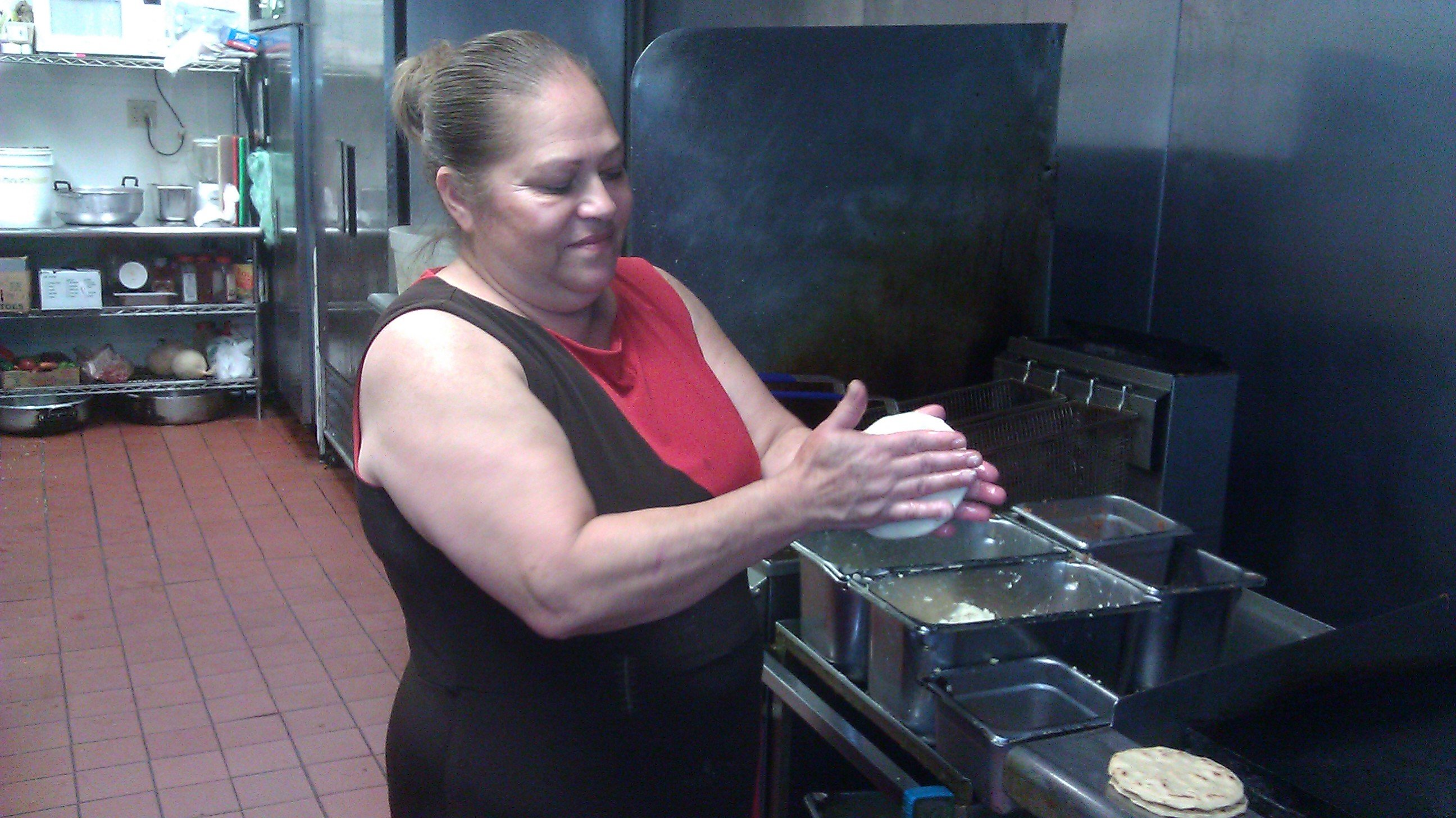 Mañana Restaurant y Pupuseria is a small restaurant that carries a big history. After Rosario Diaz’s husband was killed 25 years ago in the Salvadoran civil war, she came to California where she began making pupusas.  Then she moved to Minnesota where she made pupusas in her studio apartment along with her children Balmore and Luis Páiz and sold them out the window. After that they founded the Mañana Restaurant y Pupuseria at 828 East 7th Street on St. Paul´s East Side.

Today the Diaz family restaurant brings Salvadoran food and traditions to St. Paul. The restaurant has been there ten years and has acquired a great reputation for their good food.

The strength of Mañana Restaurant has been their East Side customers, who followed them from the lines outside of her apartment window to their storefront on East 7th Street.  Recently they have received support in commercial development from Dayton´s Bluff Community Council.

Now, they serve an average of 1,000 customers weekly.

Rosario says she’s had to adapt her pupusa recipe from the original and classic traditional Salvadoran preparation. She makes trips to El Salvador each year to stock up on authentic ingredients; certain ingredients and facilities just aren’t available here.

“We use Salvadoran products, including beans and cheese, whenever possible,” she said. “The food is homemade and Hispanic customers often say that it reminds them of home.”

In El Salvador, she would make her own dough by cooking the corn, then taking it to a community mill to grind it herself in large grinders. Here in Minnesota, they purchases Maseca brand corn flour, which is already milled.

Traditionally, pupusas are filled with quesillo, a stringy, soft cheese, that has a “better taste, and is cheese from the farm,” she said. Here, Rosario uses mozzarella cheese, which is the closest in taste and texture to quesillo. Everything else is the same. Each pupusa is made to order. The dough is made three times per day. Pork meat is cut, fried, and dried into chicharrón. After letting the chicharrón dry for a day, she adds onions, tomatoes, pepper and salt and grinds it all into a paste. They are traditionally eaten topped with curtido, a pickled and sometimes spicy cabbage and carrot slaw, with mild tomato sauce and a touch of color to give it a sunny yellow hue. The curtido is made a day or two in advance so that it has time to ferment.

Manaña offers a varied menu of Latin American traditional food but the specialty of the house is pupusas in different combinations of fillings including queso (cheese), frijoles (beans), chicharrón (shredded pork or pork cracklings), or loroco (an edible, green flower of the ayote squash commonly used in Central American cooking). Mixed pupusas (revueltas) have a combination of fillings. They’re eaten with your fingers in El Salvador, like pizza is eaten here. However, it’s not uncommon to see them eaten with silverware in Twin Cities restaurants.

National Pupusa Day
State agencies of El Salvador have repeatedly stated that pupusas are part of the national culture.  Therefore, on April 1, 2005, it was stated in Legislative Decree No. 655:

Pupusas are the “National dish of El Salvador,” because of their indigenous origin and popular acceptance, (and) for the purpose of celebrating this culinary invention, culture of the Salvadoran people, the second Sunday of the month of November of each year is declared “National Pupusa Day.”

Would you like to make a delicious mixed pupusa? Here the steps.

A mixed pupusa (revuelta). First, pinch off a palm full of dough and form it into a hamburger-sized patty.  Add to the center of the patty a smear of chicharrón, a smidgen of refried beans, and about a tablespoon of cheese, then curl the edges of the patty up and over the fillings, pinch them together at the top to form a ball, and discard the excess dough. Pat the ball flat, into a pancake, and plop it on a well oiled griddle. Too thick of a pancake or too much oil on the griddle will render a pupusa soggy and greasy. Watch the pupusas expand and cook, especially around the edges. When they’ve achieved a brittle crust on one side they are ready to flip for frying on the other side. Easy, right? (No!)

A much easier way to try a 600 years-old tradition is by visiting Mañana Restaurant y Pupuseria on the East Side of St. Paul — “Un Rincón Típicamente Salvadoreño en Minnesota,” or “A typical corner of El Salvador in Minnesota.”

Cooking the pupusas on the comal (griddle)