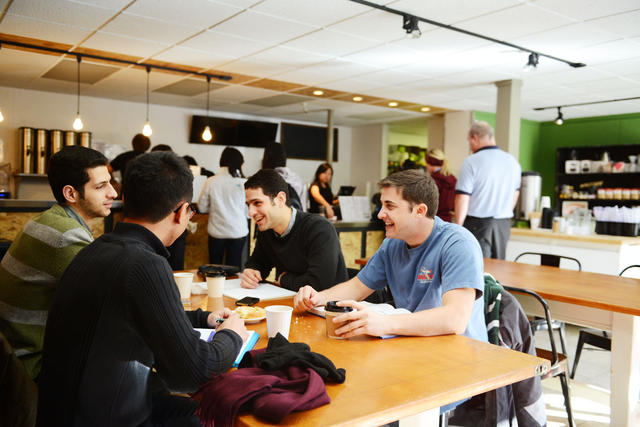 There’s no shortage of cafés in Dinkytown, and Ahmad found a new one at Friday’s grand opening of Publika Tea and Coffee Union. He and three friends spread out on one of the café’s large tables to work on homework.

“Starbucks is like any other Starbucks anywhere in the world,” Ahmad said. “It’s always nice to have more coffee shops so we can try out more.”

Publika co-owner Jonathan Chong said the café will hold its own in the crowded Dinkytown market by combining the best of international bubble tea shop Chatime with coffee from Minneapolis roaster Dogwood Coffee Co.

Chong, who runs Mall of America’s Chatime store, said he was inspired by Dogwood’s Uptown coffee bar, which brews single-cup coffee and offers a social space.

“You didn’t go to another space where you just got your coffee, sat down and did your homework,” he said.

The café has a large prep area bound by a bar, where Chong said he hopes baristas will be able to teach patrons about bubble tea and the minutiae of coffee brewing.

With its plywood, chrome and bare light bulbs, Publika is designed to look industrial. There are a few large dining tables at the center of the shop, where customers are encouraged to gather to collaborate on work or meet new people.

“You want the community to come together,” Chong said. “Even if it’s putting them in a weird spot where they have to share a table — that’s the goal.”

Publika’s two-pronged approach puts it in direct competition with both area coffee and bubble tea shops.

“We welcome the competition,” he said. “If people think they can do it better than us, you know, bring it.”

Trang Nguyen, a computer science junior, is a loyal customer of Chong’s Chatime location. Nguyen said she has been “ecstatic” for Publika’s opening and for an alternative to the Tea Garden.

“I feel like there’s more flavor in the milk tea, and the tapioca pearls are chewy; they’re fully-cooked,” she said.

In Dinkytown, Espresso Royale General Manager Rex Vogen said new student housing has had more of an effect on business than increased competition has.

“On occasion when a café closes we’ll see an influx of customers,” Vogen said. “But we don’t really feel it too much when a place opens or closes beyond maybe a slight influx.”

Looking forward, Chong said he is interested in making the coffee-bubble tea mix more literal. In the spring he’ll experiment with shaken and flavored cold press coffees, he said.

“We wanted to bring lots of really great stuff to one place,” he said. “We felt that coffee and tea could be together. Why not?”