Wanda Shelton, 51, of Ham Lake, is highly skeptical when it comes to climate change. Even if the climate is changing, she said, it’s not because of human behavior.

“That takes a lot upon ourselves to think that we could change this climate by that much,” she said. “I think that that’s putting us above God, and I don’t think we could do that.”

When told that according to the Proceedings of the National Academy of Science, 97 percent of U.S. climate scientists believe climate change is real
and is largely man-made, she remained skeptical: “I think data can be manipulated to whatever you want it to believe.”

It can be difficult to find solid ground in a topic awash in misconception from political slants and conflicting media coverage. Climate scientists agree that the earth is warming unnaturally fast and that human behavior – particularly in the release of gases like carbon dioxide from industry and car emissions – is largely responsible. Yet Americans grow increasingly skeptical.

The reasons for skepticism range from psychology to economics. An overlong winter makes it harder to believe the earth is warming. Many people don’t want to acknowledge serious impacts – like reduced crop yields and increased flooding — that scientists say may result from climate change. But scientists insist the problem is there.

John Abraham, associate professor of engineering at the University of St. Thomas, is one such scientist.

“Climate changes for two reasons: Natural and man-made,” he said. “Right now, the man-made is overriding the natural.”

Greenhouse gas levels are the highest they have been in 800,000 years, Abraham said. Since those gases are a primary cause of climate change, he finds it no wonder that the earth is the warmest it’s been in the last 400 years.

Greenhouse gases include carbon dioxide, methane and even water vapor. The gases are part of earth’s natural climate cycle. Without their presence, the atmosphere wouldn’t retain enough warmth to support life on earth.

So why would their presence effect climate in a negative way? And can individuals influence the climate?

Scientists explain it this way: The atmosphere that surrounds the earth acts as a barrier between earth and our major supplier of energy, the sun. The atmosphere absorbs, reflects, and re-emits the sun’s rays as a natural process of maintaining temperatures on the earth’s surface. Carbon dioxide and water vapor are natural components of the atmosphere, but also prevent energy from leaving. This is typically a good thing; the earth needs the presence of this energy to remain warm. But when human behavior adds an unnatural amount of these gases — particularly carbon dioxide — to the atmosphere, the amount of energy being retained begins to exceed what it healthy for the earth.

Dan Sweeny, 45, of St. Francis, believes the climate is changing but isn’t sure that he can do anything about it.

“I don’t know if there’s much we can do individually, I think our governments probably have more power to do anything.” 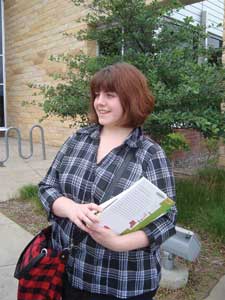 Abraham said having a government energy policy is most important. But individual action is a close second.

“If people realize that everything you do involves energy, (they’ll see) that you can make a tremendous impact. I think that every person in the U.S. could reduce their energy use by a third and not know it. If I leave something on all night, I know it’s using energy unproductively. So making personal choices does matter.”

Samantha Fredricks, or Samy (pictured, left), is a senior  at Anoka High School. She feels it’s her responsibility to be informed about being eco-friendly and is trying to convince her mom to buy her and electric car.

Samantha Fredricks will be a senior this fall at Anoka High School. In late June, she checked out a library book on being an eco-friendly teen.

Teaching about climate change at school upsets some students, she said.

“But it brings up conversation. I think (we should talk) more about global warming and keep it as an open issue so it’s obvious that, hey, this affects you.”

Meanwhile, Samantha’s determined to persuade her mom that she needs an electric car.