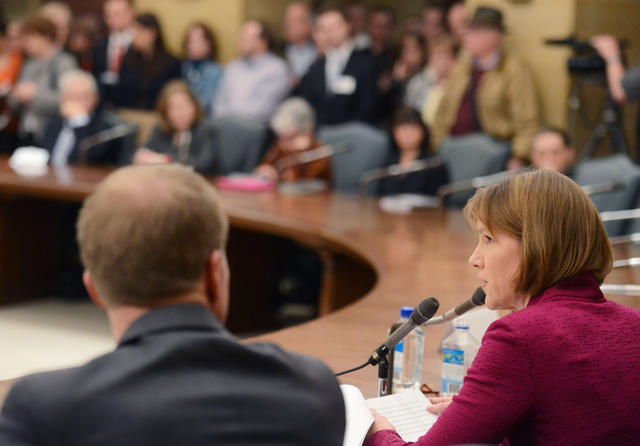 Minnesota Attorney General Lori Swanson gives a brief history of Fairview Health Services and the University of Minnesota Medical Center during a hearing on the potential Fairview merger with South Dakota based Sanford Health Sunday, April 7, 2013, at the State Capitol. (Photo by Emily Dunker)

More than 100 people packed a crowded room at the state Capitol on Sunday for a public discussion over the potential merger between Sanford Health and Fairview Health Services.

Leaders from Sanford and Fairview said at the hearing that they’d stop discussions about the takeover of Fairview if the University objects.

The University will halt all discussions of donations or charitable gifts related to the merger, University General Counsel Mark Rotenberg said at the hearing.

The hearing is the first of several being held by Minnesota Attorney General Lori Swanson, who is concerned about the merger’s implications for the University of Minnesota Medical Center, which is controlled by Fairview.

The donations moratorium comes amid concerns over the $6 million donated to the University for the TCF Bank Stadium construction from T. Denny Sanford, who has also donated more than $600 million to Sanford Health.

“This rigorous and objective process will not be tainted in any way by conflicts of interests, gifts for football or sports or anything else,” Rotenberg said.

Rotenberg reiterated President Eric Kaler’s proposal for the University to take over Fairview instead of Sanford.

“I believe that it is a win-win situation for both the University and for Fairview,” Friedman said. “I do think the University’s proposal is not only a legitimate one — it’s a strong one.”

Board of Regents Chair Linda Cohen said the board would support the University acquiring Fairview. She said a merge could be helpful in making the medical school “stronger and better than it is.”

“I think that we’ve felt that our Medical School could be at a higher echelon than it is now,” she said “And I’d say that’s probably been a concern for a few years.”

Since Fairview took over the University of Minnesota Medical Center in 1997, the relationship has been working well, but he said the research and education could benefit if the University was the sole operator.

Friedman said Fairview’s board of directors briefly discussed Kaler’s proposal in February, and talks will continue after Kaler presents the proposal to the board later this month.

Swanson interrogated Sanford executives Becky Nelson and David Link for more than an hour — longer than any other testimony.

She questioned them about Sanford’s ownership of for-profit companies, its donations to athletics departments at several universities and transparency after the organization didn’t give her any documents her office requested.

“It’s very unusual for a charitable institution to basically disregard that type of subpoena,” Swanson said, “especially one here that wants to expand its footprint in Minnesota.”

Nelson said any donations for the universities were intended to improve children’s health and fitness, and Link said the documents are forthcoming.

“We have a very long history of excellent transparency and cooperation with regulators,” Link said.

Several witnesses in the hearing voiced their concerns over a large private entity gaining control of a nonprofit organization.

“If this transaction were to proceed, it would be like selling the public library to Wal-Mart,” former Minnesota Hospital Association attorney David Feinwachs said to cheers and applause.

Feinwachs testified that since Fairview doesn’t have a current CEO during this potential merger, Sanford’s CEO would take control.

Gary Printup, a kidney transplant patient of the UMMC, gave passionate testimony, saying the medical center had saved his life and that he hoped the merger would be stopped.

“Now some guy with big pockets who likes to schmooze with the president of the University … wants to come in and take over the nonprofit that has saved so many people’s lives,” Printup said.

Minnesota Rep. Phyllis Kahn, DFL-Minneapolis, who represents the University area, expressed apprehension about the possibility of a Sanford merger because of the University’s long, “embedded” history with Fairview.

“[Sanford] may be doing a lot of good … but they don’t sound the kind of institution you want taking over the University of Minnesota,” Kahn said, noting she was happy that objection from the University would end the merging conversation.

Bill Miller, a registered nurse at the UMMC, said after the hearing that he was concerned about Sanford’s policies, including alleged mandatory double shifts for nurses.

Miller, a University alumnus who has worked at the UMMC for 16 years, said he will meet with Swanson to discuss various Sanford policy issues, which he hopes to address at the next public hearing April 21.

Despite his deep concern about the potential merger, Miller said he would not leave the University Medical Center if Sanford acquired it.

“I made a commitment with Fairview and the University hospital to give the best patient care possible, so nothing’s going to change that,” he said. “I’m just afraid of how the culture of Sanford will slowly creep into our system and how we do things.”