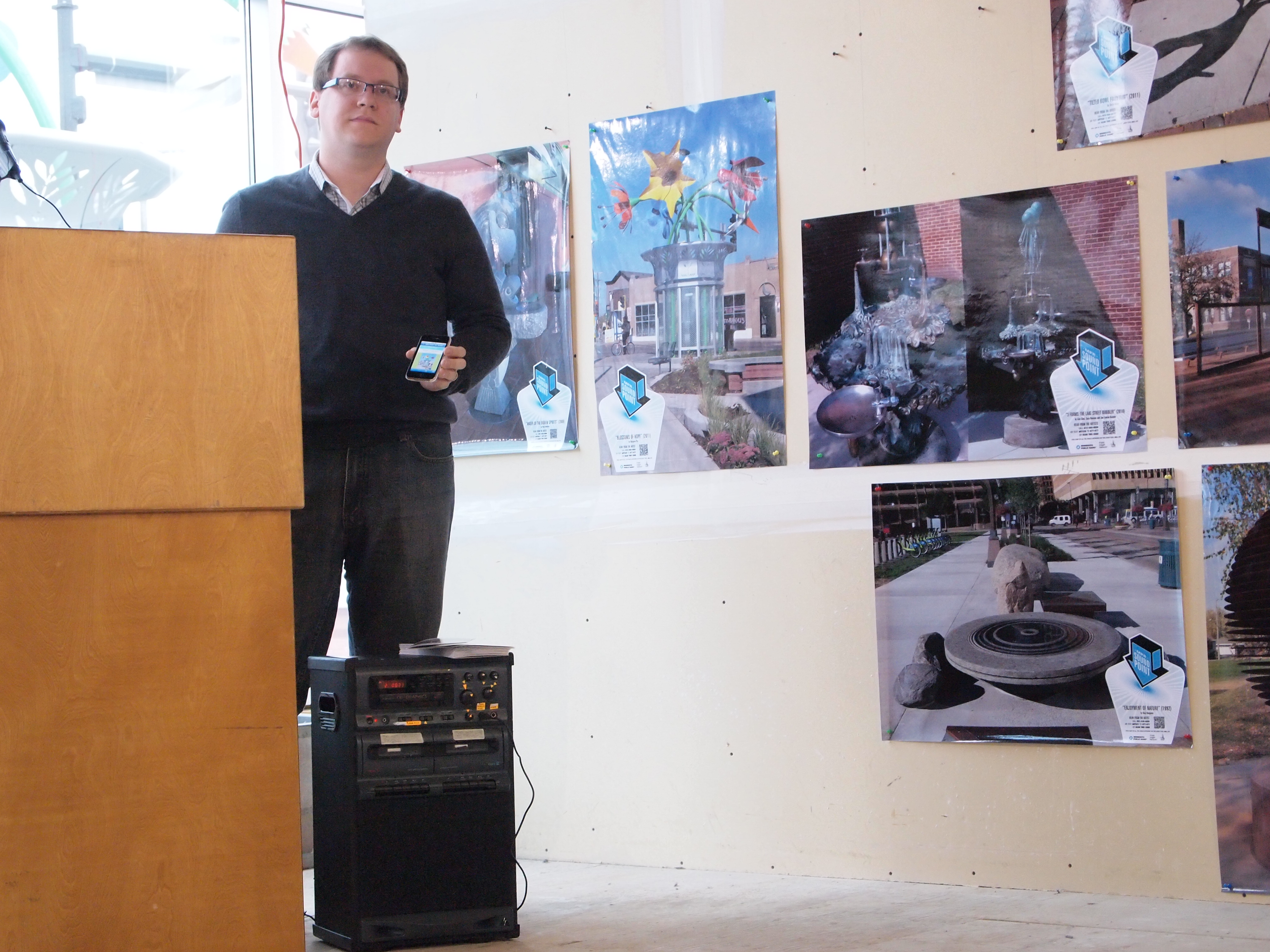 Jeff Jones of Minnesota Public Radio’s Public Insight Network demonstrated how to scan the QR codes stationed near the new public art works to access audio about the work.

“Art always leads economic development in this town, and nowhere else is this so clear as on West Broadway,” said Minneapolis Community Planning and Economic Development Director Mike Christenson, at a celebration November 10. He spoke at the 5 Points Plaza under Blossoms of Hope, a bus stop that appears topped with huge metal flowers.

Fifth Ward Council Member Don Samuels said art had been an unbroken constant in his life of trying different things, and that for many kids, “it’s the last constant” in a trajectory that might otherwise be going the wrong way. “It is appropriate that we put this here. It shows youth that you become an artist, you become prominent in the community.”

Thanks to Minnesota Public Radio’s Sound Point tour of Minneapolis Public Art, people using smart phones will be able to access the stories behind the Blossoms of Hope and 12 other new public art works (completed in 2010 and 2011) as they encounter each work, and after listening, record their own messages.

A map with all 13 Sound Points Tour of Minneapolis Public Art project areas can be found at www.ci.minneapolis.mn.us/dca/map.asp.

There are new artworks in Northeast Minneapolis near Edison High School and Jackson Square Park. Five are in downtown as well as the 35W Bridge Remembrance Garden. En Avante is at the new Public Works building on 26th Street East. Kuulo (Somali for Beads) are on 6th Street between Cedar and 16th Avenues lighting the way to the West Bank LRT station. Water of the Dodem Spirits is at 1113 Franklin Avenue East, and The Lake Street Bubbler is at 2121 East Lake Street, two of the artist-designed public drinking fountains. Read on for descriptions of some of the other art.

Jeff Jones of the Public Insight Network of MPR, “We give you something, give us something back.” The recording will pose a simple question. “We’ll start collecting, and if they’re great stories we’ll append them to the audio.” Public Insight Network is a growing “group of people who have agreed to become sources for journalists whenever their area of expertise is useful,” according to a news release. Jones said the project seeks to start a community conversation about a place, in that place.

Jones demonstrated how a smart phone can read a QR code to access the sound. Or they can call or text a phone number to listen to the artist describe the artwork in detail. (Note: it even works to call from a land line, but then the work isn’t in front of you.)

An early example of feedback: Jeff Jones said while they were installing the placard with the QR code in the Public Service Building where selections from Wing Young Huie’s Lake Street USA have been permanently installed, a worker asked, “why are none of the people smiling? I want to see people smiling in my workplace.” 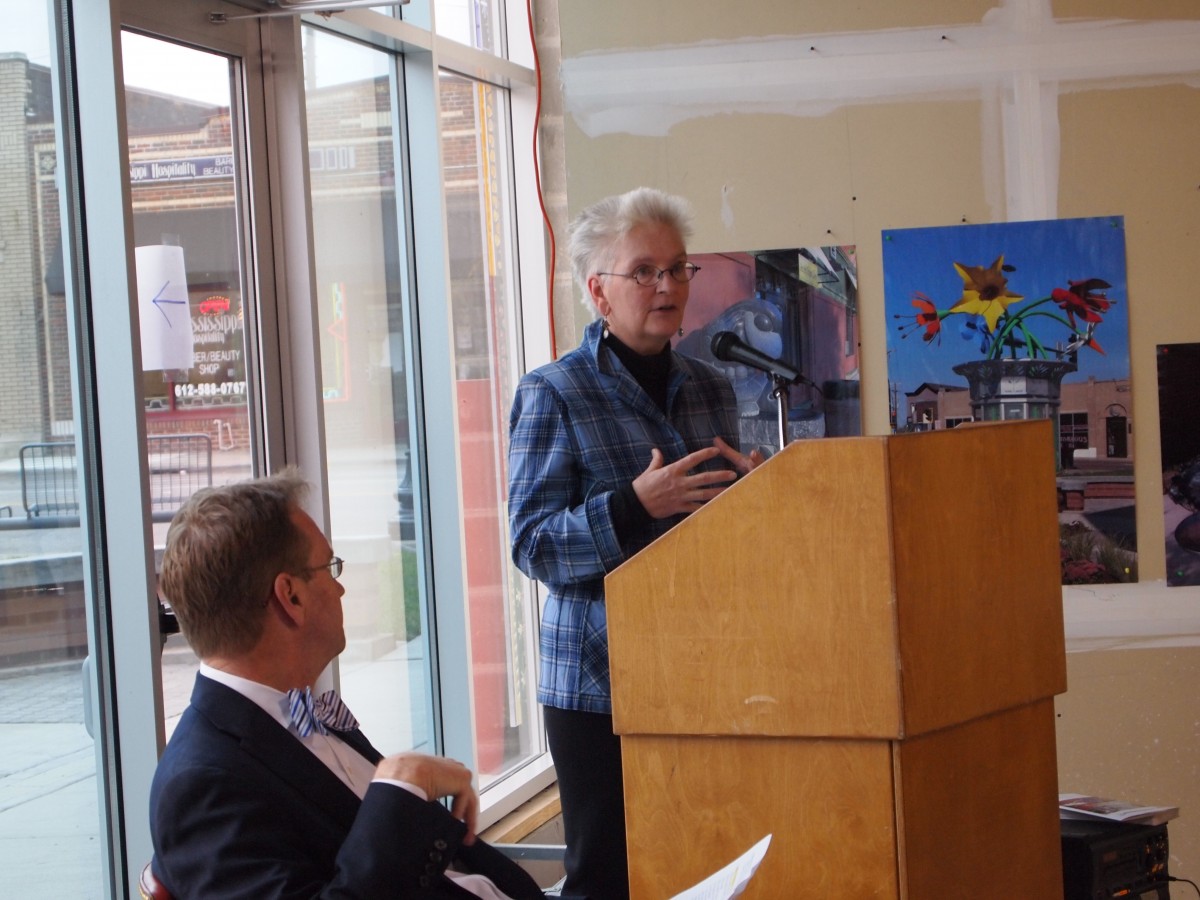 Mike Christenson, head of Minneapolis Community Planning and Economic Development, looked on while Blossoms of Hope artist Marjorie Pitz spoke. A photograph of the work is on the wall.

Blossoms of Hope, at Penn and West Broadway Avenues North, was fabricated by North High School arts graduate Ben Janssens for artist Marjorie Pitz; it’s five huge metal flower stems anchored in the ground and passing through a Metro Transit bus stop that’s anchored independent of the flowers. Catalyst Community Partners, the 5 Points Building developer, worked with the city, Hennepin County, and Metro Transit on the plaza project. Pitz’ audio segment describes their fears about what might have happened to the structure in the May 22 tornado, and their relief that it had not come apart or hurt anyone.

The other Northside Art in Public Places work that will eventually have a Sound Point is actually seven artworks Seitu Jones integrated into the Heritage Park development. The phone number associated with this, 612-284-0726, says the narration is coming soon, and to be notified, leave your contact information.

Seitu Jones has another project on the audio tour, the Tilted Bowl Fountain at Third Avenue and Main Street, Southeast. The map brochure referenced above says “users bow and hold the bowl in a brief ritual honoring the first sources of drinking water, which is near this site and reflected in the historical map of St. Anthony etched below. In his narration, Jones points out that there’s also a drinking bowl for dogs, and he would like feedback on whether fountain users can readily see how the fountain should be used.

Another piece with both a Northside and Northeast connection is Minnesota Menagerie by Foster Willey, installed in 2010 along Alice Rainville Place between Marquette and Nicollet Avenues. “Wayfinding from the Convention Center to Nicollet Mall evoke Minnesota’s flora and fauna. A bronze sturgeon and running wolf crown two kiosks. Five fish appear to swim through a tall monument,” says the MPR SoundPoints map brochure. Tiles depict state symbols…Willey’s message invites visitors to guess their names.

The artworks are all parts of Minneapolis Art in Public Places. Since the program was developed by the Minneapolis Arts Commission nearly 25 years ago, over 50 artworks have been commissioned. For more information about public art in Minneapolis, call Mary Altman at 612-673-3006 or mary.altman@minneapolismn.gov.

According to a news release, there is also a Sound Point at Duluth’s Enger Tower, and future plans include narrating murals in South Minneapolis, and recording music performed by the vocal ensemble Cantus at acoustically unique destinations around the state. 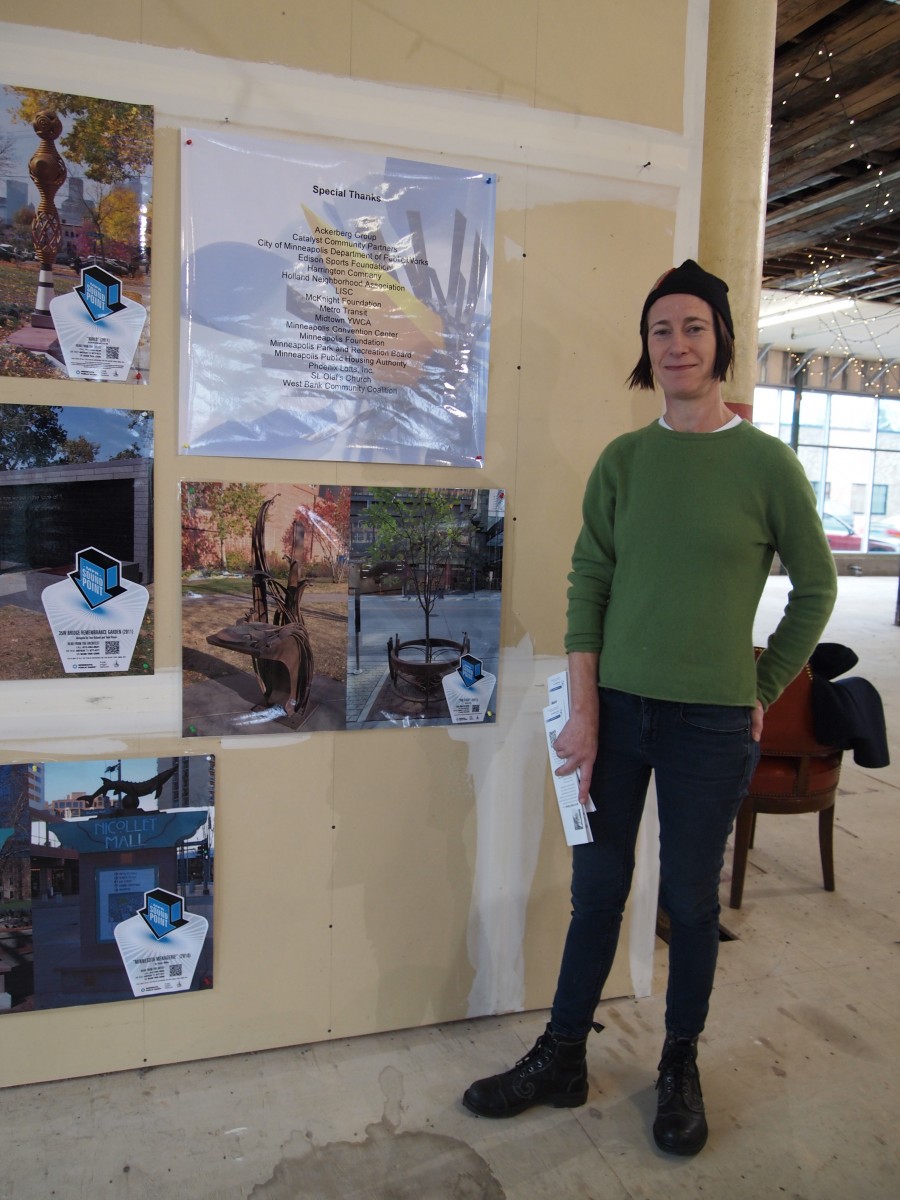 Lisa Elias, pictured with close-ups of some of her work at the kickoff celebration. He work includes 30 tree corrals and 30 bike racks, a meandering, large project. In her audio message she said she grew up in a field. About the fountain, “it’s huge” to have an outdoor fountain, and not have to go into a building to find water, or to have to buy bottled water. The bike racks were the first element of the project, tall reeds, and she had to assure there would be “no pointy edges.” She touched every piece; she describes the back-breaking work of assembling the pieces. People “may or may not notice” the installation, she said. She didn’t want it to look like a contemporary art piece – “my work has the appearance of 1920s art nouveaux metalwork.”