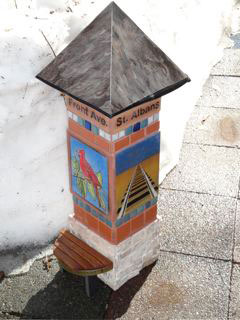 Last fall, District 6 sent out a call to local artists to submit a design for a series of neighborhood landmarks-street markers or columns-that would identify the South Como area and the three streets intersecting Front Avenue where they would be located.

The 2-by-7-foot columns will incorporate benches and images significant to the area.

The invitation to create public art drew only a few submissions, which baffled city officials, who were confident that the project’s exposure and its healthy stipend-$32,000 (used to cover the cost of materials, contractors and the artist’s time and labor)-would appeal to local artists.

Despite a disappointing start, however, the project landed in capable hands. District 6 and St. Paul’s Public Works Department awarded the contract to Susan Warner, a potter by trade, who boasts an impressive body of community mosaic and tile work.

In 2008, Warner led the charge in designing the Minnesota State Fair’s 10-by-20-foot “Greetings From Minnesota” mosaic postcard celebrating the state’s sesquicentennial. No stranger to collaborative community projects, Warner shuttled the oversized work-in-progress around the state recruiting folks of all ages to lend a hand in the creative process before it was permanently installed on the outside of the Food Building. She also lays claim to the mosaic and tile work that adorns the storefront of the Hampden Park Co-op on Raymond Avenue.

The Front Avenue area is the first to incorporate public art into the city’s street-revitalization project. The Residential Street Vitality Program (RSVP) designates which areas are in need of street repair, lampposts or new plantings of trees, shrubbery or other greenery.

The advantage to a community project is that it brings people together and gives them the opportunity to take part in a one-of-a-kind creation, Warner said. “You’re not ordering something generic out of a catalog.”

There are a “core group of people” who’ve regularly attended brainstorming sessions since last summer, Warner said. More recently, the all-ages group has taken part in a few hands-on workshops at Mary Jo Schmith’s Front Avenue Pottery and Tile Co. Students at L’Etoile du Nord French Immersion School will have a chance to make their mark on the street markers, as well.

Final designs are still being considered, but the 2-by-7-foot art columns-which resemble stretched-out birdhouses-will incorporate single-seat benches and various symbols or images significant to the area’s history, culture or landmarks. Topics being considered include Como Park, the railroad, wildlife and a nearby cemetery.

There is plenty of work to do on the art towers before they are installed in July. But Warner is confident the grout will dry in time for the city crews to install the columns, leaving ample time for foot traffic to pick up along Front Avenue.