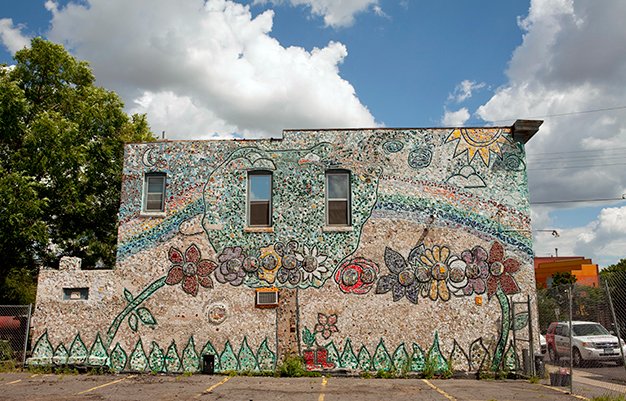 I keep waiting for the news that the Peace House mural is being torn down. It could happen any day now, since Peace House has officially moved into its new home. The organization is going to be in a much better building that fits its needs, and in the space where the rather dilapidated building stands now, there will be nice new affordable housing units, so all in all, everybody’s happy—except maybe the people, including me, who love that mural.

I pass Angela Carlson Talle’s glittering mosaic several times a week. When the sun is setting, it sparkles with color and light. It makes me happy. I’m going to be really sad when it’s gone.

After returning to the Twin Cities from Philadelphia, Talle decided that the raggedy looking building “needed some love,” and after getting permission and input from Peace House, raised the money herself, getting tile donations from local glass and tile shops. She knew there was a possibility of a new development there, but she went and made the mosaic anyway.

And of course it was worth it, even if the mural can’t be preserved, because it gave us—anyone who took joy in it—a piece of beauty for the short time that it has existed.

As someone with a background in theater, I should know this. Theater exists in the ephemeral. Theater companies spend weeks, months, even years (well, in Europe anyway) creating a performance, which is over in an instant. Even a show has a long run is unique each night. No two performances are ever exactly the same. Does that mean that it’s not worth doing? Of course not. It’s worth it to create something beautiful, to create something that inspires, that moves, that haunts people, even if just for a moment. 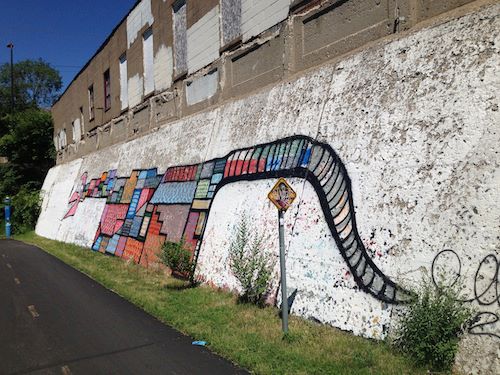 Muralists and graffiti artists understand this. Last month, street artist CAW made a mural for the Greenway Glow, a fundraiser for the Midtown Greenway Coalition, and a Hennepin County crew painted over the mural because the artists hadn’t secured a permit. (The artists had permission from the owner of the adjoining building, but the wall itself is in the county’s jurisdiction, and the cleaning crew was unaware of the mural’s origin and purpose.) The obscuring was only partly accomplished, with some of the mural left intact, so CAW transformed the mural into a long-necked dragon creature complete with website address.

I think at heart, artists share a drive to always create, and if the product doesn’t last forever? Well, we wish that we could preserve as much of the good stuff as we can. But sometimes, you have to just appreciate a beautiful thing for what it is for as long as you have it.

As for me, I’ve been taking deep breaths each time I pass the Peace House mural, soaking it in, holding onto the memory for when it’s gone. I’ve resisted the urge to jump the fence and grab some of the tiles, as others have. I think the tiles belong with the people who spent time at the Peace House.