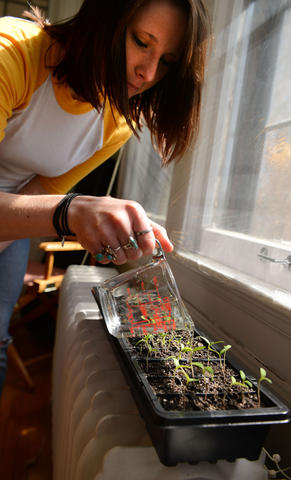 Nursing and horticulture senior Shanda Demorest waters plants for the Prospect Park community garden Tuesday, April 2, 2013 at her home in Prospect Park. "These plants need a little extra boost before we start planting in early to mid-May, hopefully," she said. (Photo by Amanda Snyde)

Demorest has lived in Prospect Park for three years, but until recently didn’t have space to garden in Minneapolis.

“It is hard to have plants as a student,” said Demorest, a University of Minnesota nursing senior.

Soon Demorest will move her plants to a new community garden in Prospect Park.

The Prospect Park Community Gardens provide gardeners with land to grow vegetables and other plants.

Sam Johnson helped create the program for apartment dwellers and other residents of Prospect Park, where it’s often too shady for vegetables to grow.

The PPCG has 25 gardeners and a waiting list, Johnson said.

The group is diverse, ranging from parents and their children to people in their eighties and college students, said Vera Marshall, longtime resident and member of the Prospect Park Gardening Club.

“Some have gardened forever, and some are new to gardening,” she said.

Demorest, a horticulture minor, said she got her green thumb from her grandparents.

“I love being in nature and playing with my food,” she said.

Demorest will move her seedlings into her 20-feet-by-20-feet garden plot later this spring. She said she’ll maximize her space with keyhole gardens and a path running through her plot.

A keyhole garden is a circular garden, where the gardener can stand in the center and reach all of the plants. Keyhole gardens are popular in urban gardening, where space is limited, Demorest said.

Petterson has lived in the neighborhood since the 1970s, when he was an economics student at the University of Minnesota. Petterson now owns Terrace Horticultural Books in St. Paul.

Petterson, who gardens in his own yard, said his plot will house a brick oven, where he can bake bread and pizza and will also serve as a gathering spot.

PPCG co-coordinator Del Hampton taught a vegetable growing class for the gardeners in March. Hampton is a University of Minnesota Extension Master Gardener and member of the Prospect Park Garden Club.

Master Gardeners are required to complete 48 hours of horticulture training from the University and 50 hours of internship volunteer time.

Hampton gave the gardeners tips and ideas for their plots and helped them plant some seeds.

Johnson and Hampton worked for more than a year to get the program blossoming and plan to have it fully running this summer.

The community garden is divided into two triangular sites off of Arthur and Yale avenues. They are both near sound walls adjacent to Interstate 94 and were formerly “wasted space,” Demorest said.

Johnson, who helped urban youth garden with AmeriCorps from 2008-10, said he hopes to expand the program to include activities and events with elementary schools and hospitals.

A lot of children never get the chance to see where their vegetables come from, Johnson said.

“It feels good being able to grow your own food,” he said.