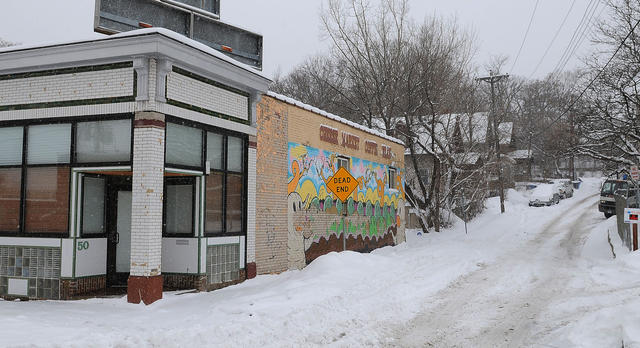 The Prospect Park East River Road Improvement Association has applied for Prospect Park to become a conservation district, which may affect development in the area. (Photo by Amanda Snyder)

From his time as a University of Minnesota student in the ’60s, Joe Ring remembers the Motley neighborhood as charming and quaint with hundreds of residential homes. Now, the neighborhood he remembers is home to the Superblock and parking ramps.

Watching the transformation of that area, he said, is part of the reason why the Prospect Park East River Road Improvement Association is so intent on becoming a conservation district.

Before it can, though, the City Council must approve an ordinance, currently in the drafting stage, which would allow small districts of the city to apply for conservation district status.

“It’s costly and time consuming, and you do not know for sure what the end results are going to be,” said Ring, who sits on the PPERRIA board of directors.

John Smoley, Minneapolis city planner, said he has been drafting the ordinance with the planning commission since last summer and will be completing his third draft later this week.

City Councilman Cam Gordon, who is sponsoring the ordinance, said he expected it to be enacted this summer.

The delay is due to the amount of community input necessary,
Smoley said.

“We’re determined to solicit as many ideas and concerns from members of the public as we can,” he said. “Maintaining some kind of tight timeline is secondary.”

Once the current draft is drawn up and has gone through public hearings, the approval of historical preservation committees and the City Council is necessary before the ordinance can go into effect.

“These issues have a history of being thought-provoking and difficult to get a consensus on,”
Smoley said.

For Prospect Park, the process is a race to protect the neighborhood from development like new University buildings and high-rise apartments, Ring said.

“They slowly eat you up,” he said. “We’re trying to prevent the slow incursion of the other economic forces … and create the means of having oversight.”

Being a conservation district would offer more protection than regular zoning codes for issues like housing density, Smoley said.

Marcy-Holmes and Dinkytown are grappling with issues that come from development, Ring said.

“They are actually in a more dire situation,” he said. “[Properties] are on their way to being
demolished.”

PPERIA originally applied to be a historic district years ago, Ring said, but stopped after two years because of the stringent administration it comes with.

Residents in wheelchairs were denied permits to build temporary ramps to their houses and families struggled to work with the city on upkeep, like replacing windows painted with lead paint.

“It created a lot of turmoil and difficulties for residents in the neighborhood,” Ring said. “If we were actually designated as a historical district, it would be horrendous for us to live under that kind of administration.”

Conservation districts are ambiguous, Smoley said, and so their guidelines need to carefully represent Minneapolis neighborhoods’ wants and needs.

“It represents a great opportunity for our community to come up with something unique,” he said, “but that uniqueness or that diversity of practice also makes it a bit more difficult to achieve
consensus.”