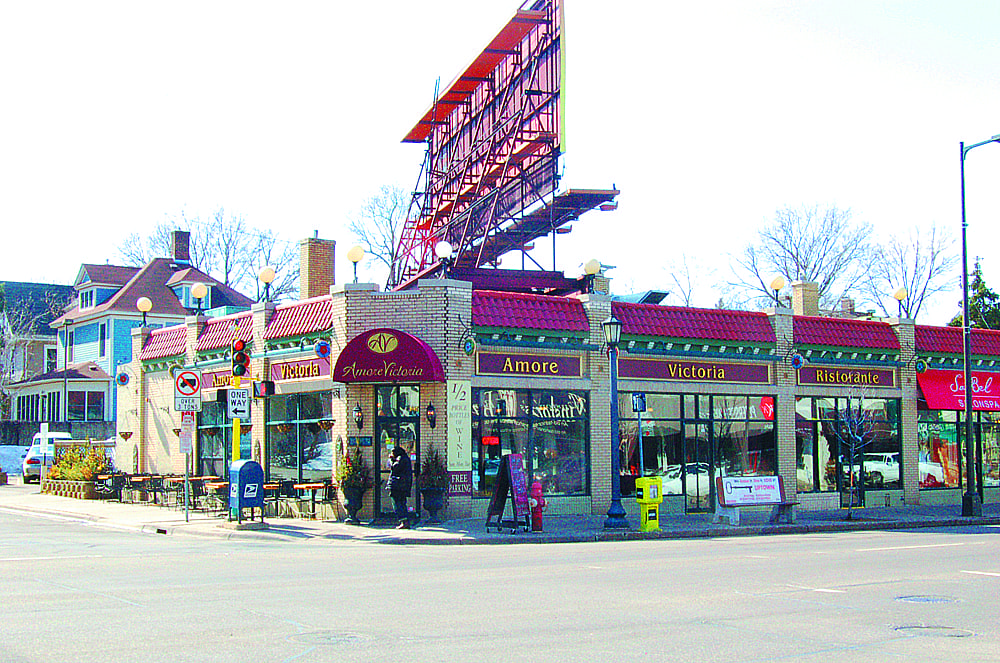 Amore Victoria is proposing a rooftop deck to the right of the billboard.

The restaurant at 1601 Lake Street has applied for an expansion of premises for an expanding seating area and rooftop deck. They will also need to expand their kitchen and add an elevator to access the deck. Maximum deck capacity will be 124 people. Any music will be allowed as long it is not live. Their six off street parking spaces as required by their current business model will not change. In addition the restaurant currently shares 27 spaces with the neighboring salon next door which closes at 4 p.m. When the UNN went to press there was a neighborhood meeting to gather public opinion scheduled for March 23 at Bryant Square Park.

The city is considering expanding the Mobile Food Vending ordinance to areas outside of the Downtown Improvement District. In January Council Member Meg Tuthill’s office requested feedback from the Tenth Ward about the possibility of food carts in Uptown. Her office has received more comments in support of mobile food vending than opposed. She supports expanding mobile food vendors in Uptown but will wait to see a final draft of the ordinance before commenting.

In the fall of 2010 the Minneapolis Regulatory, Energy and Environment Committee asked the City Council to approve an amendment to the Minneapolis Code of Ordinances relating to Licenses and Business Regulations involving Tobacco Dealers. The proposed amendment included a new provision that would have prohibited indoor use of tobacco samples in tobacco shops. If it had passed, Minneapolis tobacco shops like Golden Leaf Tobacco at 3032 Hennepin Avenue would no longer have been able to allow sampling of tobacco products in their store. (See UNN story December 2010). Comments were sought from the industry shortly after and the proposal is still under review at this time.

Uptown Cafeteria submitted a request for an Entertainment Class upgrade from Class E to B to allow for customer dancing. But by mid-March that request was withdrawn. If it had been approved, the side room off the bar on the northeast corner of the restaurant would have been allowed to host dancing with amplified music. That portion of the restaurant faces an empty lot, Cowboy Slims and Stella’s Fish Cafe. With that upgrade the restaurant would also have been allowed to have live music and open windows during any of their approved operating hours. During the application and approval process the City had hoped to negotiate closed windows during any amplified music event. Parasole Restaurant Holdings said the request was only for sock hops and special events. When asked why the request was withdrawn, Randy Stanley, Divisional Vice President for Parasole, said that “although there was neighborhood concern, that was not the determining factor. We found the CARAG Neighborhood receptive but concerned about the idea, and also interested in some conditions but willing to work with us.” The idea is also being considered for potentially “another direction” or “another time.”

A proposal authored by Council Member Meg Tuthill to limit the distance required between a church or school and a liquor store has passed. The new law now requires liquor stores to be at least 300 feet from their property line to the property line of the church or school. It replaces the law that only required that distance from door to door. In Uptown that means that a proposal to put a liquor store at 26th and Hennepin across the street from Jefferson Elementary will not be allowed. (See UNN story March 2011).

The view from Stella’s penthouse dining deck looking down on their bar deck with Cowboy Slim’s to the left and Uptown Cafeteria to the right (out of view.) (Photo by Bruce Cochran)

In March the UNN reported on this package proposal authored by Council Member Tuthill on restaurant and bar owners outside of downtown. (See UNN story March 2011). Some of the proposal key points included:

Since then the proposal has been returned to city staff for industry and community input and presentation for a later date.