He’s on the road, filling in as a violinist for the Philadelphia Orchestra while he waits for a deal to be made with the Minnesota Orchestra.

“It’s wonderful to be able to play with these other orchestras and great musicians and stuff,” he said. “But I have two small children and am married, so it is also a bit of a burden.”

The labor dispute that has stopped orchestra performances hit the six-month mark this month. But the orchestra isn’t getting much more time from the Legislature. 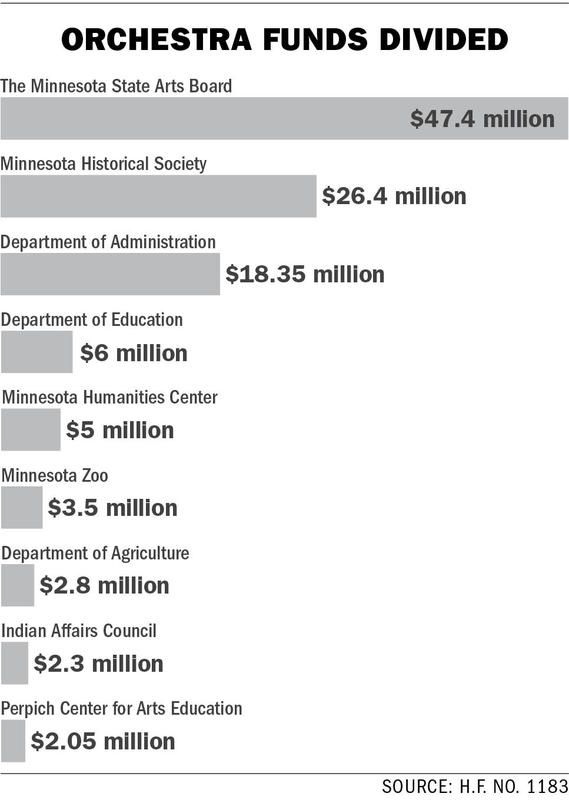 Rep. Phyllis Kahn, DFL-Minneapolis, proposed an additional piece to the Legacy omnibus bill that would mean funds normally appropriated to the ensembles are given to different arts organizations if a deal isn’t made soon.

As of this week, the St. Paul Chamber Orchestra is close to reaching an agreement and will begin concerts, assuming the musicians and the American Federation of Musicians ratify the agreement. The Minnesota Orchestra is still in a lockout.

Kahn said the proposal would offer alternative options for artists to perform outside of the orchestras if a deal isn’t made within 30 days of the bill being enacted.

“Instead of giving [the musicians] this money directly, we are giving it to the Minnesota Arts Board,” Kahn said. “It puts money into a fund that could be used to go towards concerts.”

A stipulation in the proposal prohibits the Minnesota State Arts Board from giving any of the funds to the Minnesota Orchestra or the SPCO if performances remain at a standstill.

The bill moved past the House Ways and Means committee last week, and Kahn said it’s likely to pass.

She said many Minnesotans are “devastated by the lack of music,” and her bill will encourage a deal between musicians and board members.

“I was talking to one person … and she said she’s left half-a-million dollars to the Minnesota Orchestra in her will and she wants to change it,” Kahn said. “A lot of people have said they are pulling back their funding.”

University of Minnesota School of Music Director David Myers said he’s concerned about the consequences of moving funds away from the orchestras because of the impact it will have on the musicians.

Some musicians have decided to leave the Minnesota orchestras for other opportunities while the concert hall remains silent, which Magness said will make coming back more difficult if a deal is made.

“The reason the orchestra was great is because of the people who were there,” he said. “And when those people leave, you aren’t as good as you were, even if you hire 24 outstanding positions.

Impact on the U

Musicians in both orchestras aren’t the only ones impacted by the hiatus.

At the University, students in the School of Music are missing out on a partnership the school normally holds with the Minnesota Orchestra.

“I think it has been discouraging not to have that opportunity this year,” he said.

The School of Music boasts several faculty members from the Minnesota Orchestra and St. Paul Chamber Orchestra, but Magness said it doesn’t replace the benefits of seeing artists perform live.

“I can say for sure in all of my schooling years, I’ve learned more from going to a great recital of a great violinist or a great orchestral concert,” he said.

Violin performance senior Megan Poppe said the impasse has caused a huge loss for music enthusiasts and students in Minnesota.

“It was one of the top orchestras in the country, and the fact that we’ve lost them for this year and maybe longer is sad for any future orchestra players,” she said.

Myers said the openings aren’t an advantage for students because most graduates will need more musical experience before trying out for either Minnesota orchestra.

The Minneapolis and St. Paul orchestras aren’t the only ensembles to have disagreements in recent history. Myers said the disputes are a trend and an indication of a changing climate for orchestras around the country.

“Any time musicians are not able to sustain their work and their incomes, naturally our faculty and our students will feel concerned because our job is to prepare career musicians,” Myers said. “So yes, we feel concerned about the future.”

In response, Myers said the School of Music is incorporating more business lessons into the curriculum by tapping resources at the Carlson School of Management.

“The question is, ‘How do we sustain the orchestra, and how do we try to sustain the musicians even in the face of a very challenging economy?’” he said. “And I don’t think any of us have the absolute answers to those questions. I think we need a lot of research and a lot of dialogue.”