Eleven Dinkytown property owners have organized to attack the proposed small-area plan and any design guidelines or historic designation for their four-block business district adjacent to the University of Minnesota.

At the same time, they said expanding the planning district and rezoning it to C3A, “the highest density mixed-use district—is essential for this area.” C3A makes possible the six-story apartment buildings with commercial street-level space – two of which are under construction in the four blocks of Dinkytown and several others being built nearby.

Despite eight months of weekly open meetings by the small-area planning group, a letter signed by the individuals organized as the Dinkytown Property Owners Group accused Minneapolis city planner Haila Maze and the Dinkytown Business Association of neglecting their property interests in proposing a small-area plan for Dinkytown, especially in a public presentation November 18 at the Varsity Theater.

“To be clear, it is important to point out that the Owners Group is a completely separate entity, with differing viewpoints and perspectives, than the Dinkytown Business Association,” the letter said. “We are concerned that the process thus far is not benefitting from the input of property owners in the district.”

DBA President Skott Johnson has said the working group for the plan has met regularly since March and that their meetings have been public and that some of the signers had been notified.

Nonetheless, Maze and Johnson agreed to additional meetings to discuss the property owners’ issues and their demand to be listed among the stakeholders in implementing the plan.

Cordelia Pierson, president of the Marcy-Holmes Neighborhood Association that includes Dinkytown, is also calling for additional meetings this month. The MHNA’s land-use committee is scheduled to take up the plan at 6 p.m. January 14 at the University Lutheran Church of Hope, 601 13th Ave. S.E.

“MHNA is focusing on what preservation tools are available and where to recommend increased density,” Pierson said in an email. “The sense of the board now is against recommending density in the core of the Dinkytown area – near the intersection of 14th and Fourth – but supporting it in the commercial expansion area, the blocks surrounding Dinkytown – the library block, next to the Chateau, and across from Dinkytown Wine and Spirits.”

“The proposed design guidelines call for setback from the street front and two stories of retail along the street,” she said, adding that a proposed hotel would require changing current regulations.

“The increase in violent crime is resulting in MPD [Minneapolis Police Department] staff asking important questions about the public safety implications of increased undergrad density in Dinkytown,” she said.

Curt Martinson, a consultant working with Doran Companies, presented the owners’ letter to the DBA meeting on December 12 when Maze was reviewing a draft of the small-area plan. He complimented Maze for all the work she’s done and said recommendations for more parking should be strengthened. But the group tried to end any type of historic preservation and design guidelines.

“Property Owners oppose any designation of Dinkytown as a local or national historic district, part of the Minnesota Main Street Program or as a Conservation District,” the letter said. “While our group agrees that there may be certain properties that warrant historic recognition, the Property Owners also believe that any such designation should be made with precision so that it applies only to properties truly worth saving, and that any attempt to place a designation on the entire area would be a mistake.”

Historic designation “would significantly diminish the value of existing properties, stifle renovations needed for tenant expansions or routine re-tenanting, and prevent the occurrence of responsible future redevelopment of older buildings,” the group said.

Lowertown in St. Paul, however, did not suffer such declines. Lowertown, which has been a designated a national historic district, has been rated by RealtyTrac as the top “hipster” zip code in the nation with anticipated increases in property values. The TC Daily Planet, City Pages and St. Paul Mayor Chris Coleman celebrated the recognition.

The Dinkytown property owners also challenged the idea that Dinkytown’s uniqueness was historic, writing that, “A historic designation could have a very negative impact on the ability of Dinkytown business to retain its unique flavor.” For example, Jason McLean’s redevelopment of the Loring Pasta Bar and Varsity Theater – recently recognized as having among the most creative restrooms in the nation – would not be possible with historic guidelines, the group said, without acknowledging the historic value of Loring’s exposure of the original drug store façade. McLean was among the signers of the letter.

Historic designation would stop “creative, innovative and artistic designs for Dinkytown properties,” and historic district tax credits would not pay for the hassle and expense of saving smaller the properties, they said.

The owners’ group opposed not only historic guidelines but also any design criteria because “creating criteria of one-size-fits-all does not fit with Dinkytown eclectic history.” Instead, Dinkytown must adapt to “a changing mix of tenants” and “ever changing market conditions. “ Customers and the market should determine the area’s changing needs. 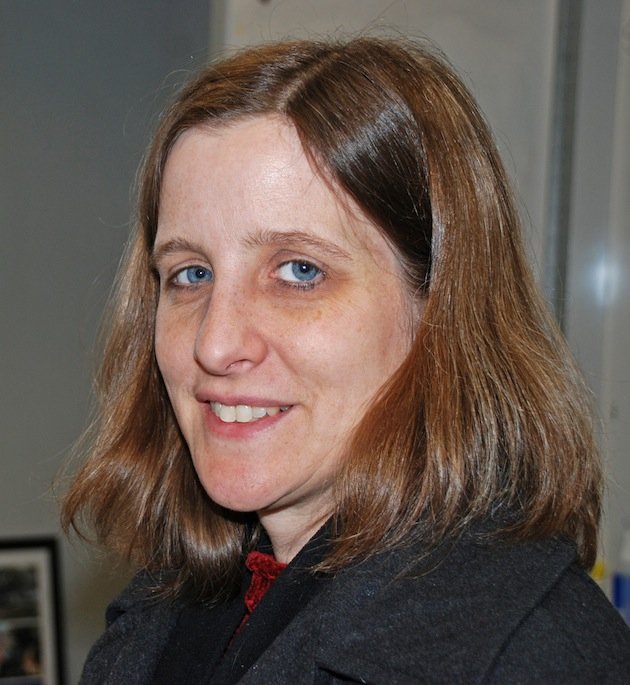 Right: Minneapolis city planner Haila Maze has been working on the Dinkytown small-area plan and the Marcy-Holmes Neighborhood master plan.

A public parking facility close to or in Dinkytown is the “ultimate fix” for the parking problem, the group said. Short of that, the group proposed a portal or link to the University’s existing ramp on Fourth Street with more advertising of it, a new parking ramp over the railroad trench with access from different levels and a link to the bike path and walkway below, and additional on-street parking with meters along curbs on the bridges.

Maze’s draft of the plan proposes expanding the “activity center” to acknowledge the areas that already house new six-story apartment buildings. One proposal calls for adding seven blocks to the four-block Dinkytown designation, moving it east to 11th Avenue Southeast.

The group agreed with the plan’s proposed expansion of Dinkytown as a city activity center. “This expansion could not only be to the west but also to the east towards the University Parking Ramp.” 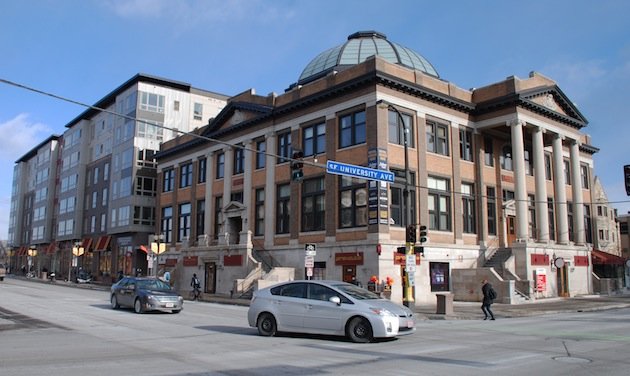 The historic Dinkydome, once the site of a Bible college, is now part of Sydney Hall, a mixed-use apartment development by Doran Companies. 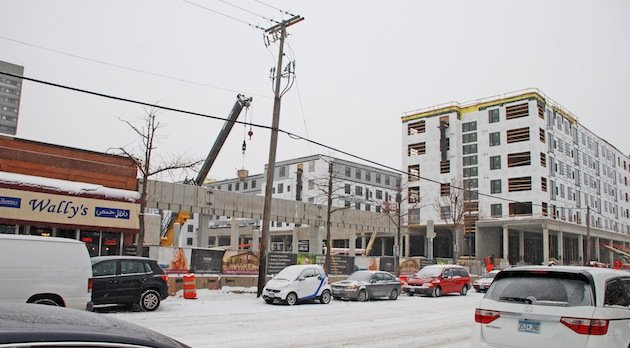 Two six-story mixed-use buildings under construction in Dinkytown are the Venue (Opus Development) in the center of the photo where the one-story House of Hanson grocery stood as recently as July and the Marshall, site of the former Marshall High School on the right. Property owners say Dinkytown should be rezoned to allow more of these mixed-use buildings. 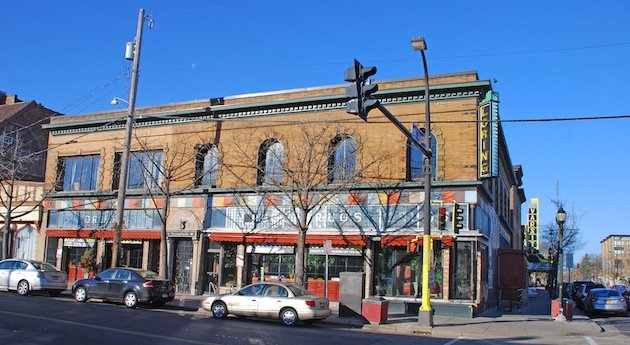 A group of Dinkytown property owners say this redevelopment of the former Gray’s Campus Drug building as the Loring Pasta Bar would not have been possible with historic designation.

In an interview, DBA’s Johnson said Dinkytown should get a parking ramp now that the City Council has agreed to build a parking ramp for the Minnesota Vikings at the downtown stadium – a move that reverses a policy against building new parking ramps.

The Rev. Doug Donley of the University Baptist Church, served on the DBA planning committee and agreed with the need for a ramp. Five different congregations use his church on Sunday, he said, and the building has only 10 parking spaces. Many people drive long distances to church and they used to park in lots that have been removed for the new apartment buildings.

Several DBA business leaders have said that developers should provide public parking as a benefit in exchange for zoning changes they’ve received for their higher buildings. The C3A zoning change would remove that leverage. They also said the city could provide free parking, as Edina does at 50th and France Avenue South.

The city’s draft of the plan, PowerPoint presentations from the meetings, and other documents are posted on the city’s website.