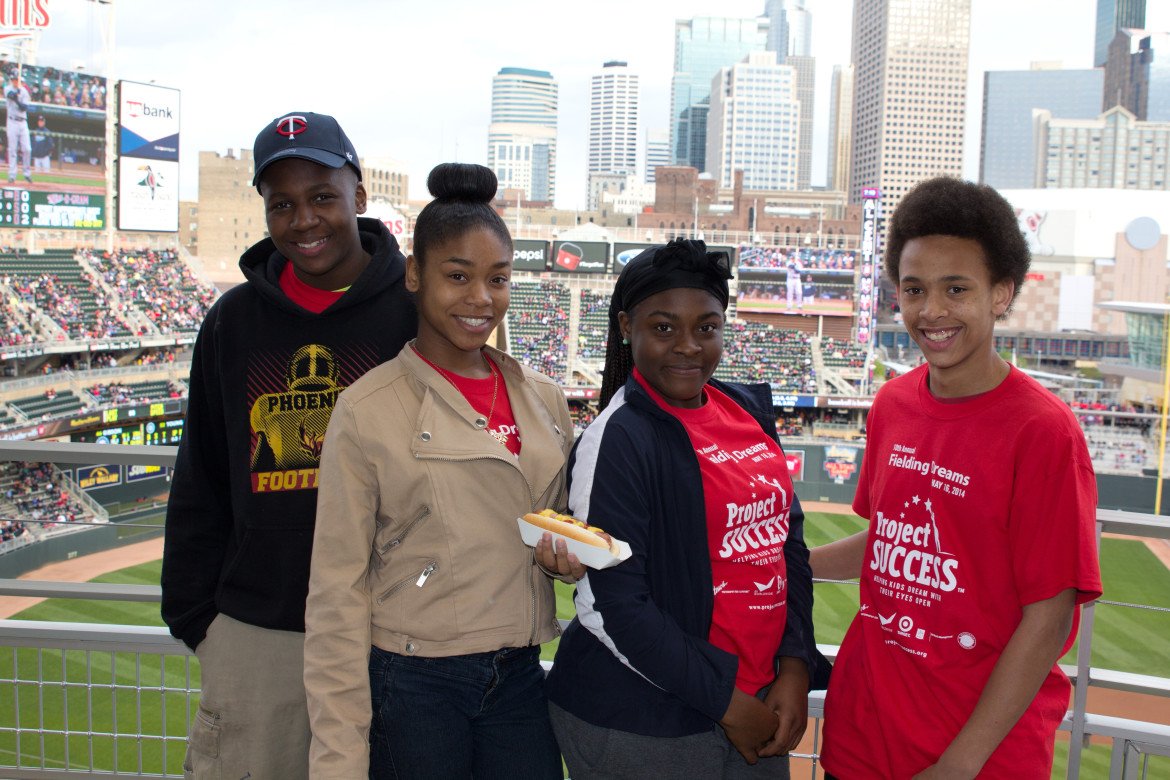 Founder and Executive Director of Project SUCCESS Adrienne Diercks formed the program in 1994 with the goal of helping students reach their dream.

“Our mission…is to inspire young people to dream about their future and help them take the steps to get there,” she said. “Give them the tools to take them through the rest of their lives. It’s not rocket science, but that idea if you dream big…if you think about what you really want in the world, who you are and what’s out there, you can make anything happen.”

Project SUCCESS serves nearly 12,000 students in the Minneapolis and St. Paul area. They’re funded by individual donations, foundations–private, corporate and family–and each school using the services pays a fee ranging from $2,000-$4,000. Also, with partnerships from corporations such as RBC, Ecolab, Target, Lifetouch, Aroha Philanthropies and 3M, Project SUCCESS accumulates an annual yearly budget ranging from $1.7 million to $1.9 million, which breaks down to about $140-145 per student they serve.

“We’re here because we work with true partnership with everyone to serve our kids and serve our community,” Diercks said.

They partner with 35 theater companies and take students to shows. They also have students perform in musicals with a show in the fall, spring and winter.

“The community building that happens through those events is really powerful,” Fraboni said. “They take the themes and the life experiences discussed in the play and they’ll take that back to the curriculum that gets discussed in the classroom.”

Christina Oey, alumna of Project SUCCESS, said what makes this nonprofit unique is the personal connection the students build with the facilitators as they followed her for six years, from middle school to high school.

“The facilitators were young, they were just out of college themselves and just had experienced what we wanted to experience,” Oey said. “It was just that level of commitment from the facilitators you don’t see anywhere in many nonprofits.”

Oey was one of the first students the program serviced as they helped her from seventh grade throughout high school. The connection started when Diercks came to her seventh grade English class at North High in North Minneapolis and talked to the group about goal setting.

Oey said it was the first time they’d ever have someone to talk to them about goals. Oey said her facilitator helped show her the importance of grades and how it would open up opportunities for her.

“She put it in a big picture for me and that was my big turning point,” Oey said. “I wanted to get out of that continuous cycle of poverty of seeing my peers go to jail, getting shot at, failing.”

After Oey developed that drive she was able to progress to become a successful student and her grades improved to the point where college was a possibility for her. She said the program helped her enroll in ACTC classes for free and took her on college visits. Oey went on to graduate from the University of Minnesota and became the first in her family to graduate college. Today she’s the Executive Director of United Way-South Dakota.

“It isn’t one thing, it isn’t a silver bullet, it isn’t a one shot deal. It’s overtime in a relationship with someone that believes in you and that can help guide you and facilitate things to get you to where you want to be and that’s what we want to do for students,” Diercks said.

Fraboni said the relationship building with the program begins with students while they’re in sixth grade and they follow them up until they graduate high school.

The program has also helped student who were with the program on a shorter timeframe.

Alumna Husna Ibrahim was introduced to the program as a sophomore at Patrick Henry High School after migrating from South Africa. She said her family didn’t know much about high school let alone think college was a possibility for her.

“[Project SUCCESS] pretty much helped us explore our passions,” Ibrahim said. “They weren’t trying to make everyone go to college…they just wanted to ensure that ‘hey, what do you want to do. You matter so much that you having a dream is important. Whatever you want to do you can achieve it.’”

Ibrahim is now a freshman at the University of Minnesota as she’s the first in her family to attend college.

Oey said she’s most impressed with the growth of the program. She said it started with just Diercks and when she was a senior in high school they added a few more facilitators and held a small office. Oey visited their base last spring and was stunned to see the evolution and how they are now working with professionals through various fields.

“I’m really proud of Adrienne, she is what I want to do with my career,” Oey said. “Everything she has built is amazing and I admire her hard work and dedication to her dream…you talk about Project SUCCESS and helping you reach your dream, well Adrienne, it was so neat to watch hers.”

Correction: A previous version of this article incorrectly referred to Marta Framboni as a facilitator. We regret the error.