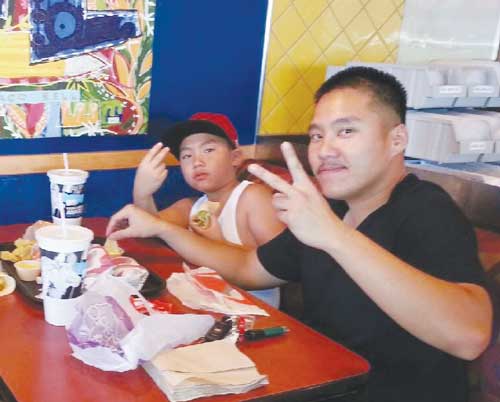 Tou Pheng misses his children. Married at 18 with a new son, he thought the future was full of promise. Six year later, however, Tou Pheng realized where things went wrong.

“I thought I knew everything about being a father, but I didn’t,” Pheng said. “I was hanging out with the wrong crew, being at the wrong place at the wrong time, just doing nothing with my life. A little after my wife and I separated, I had my second son with a girlfriend, but life for me was still the same.”

Tou Pheng found himself in and out of jail, and finally came to the realization that he needed a change.

“Life in jail without your family is no life for anyone!” Pheng said. “At this point, I knew something had to give. I didn’t get to see my kids when I wanted to and (today) I barely get to see them. It was always hard making calls to my kid’s mothers to see my children because the mothers and I didn’t see eye-to-eye. It has been a very long time now not being with my children.”

For a growing number of second-generation Hmong Americans, this story is familiar. Nearly 60 percent of Hmong marriages end in divorce. These broken relationships take a toll on the community through stressed families, struggling students, and fathers who live with a weighty child support order and daily regret. But for Tou Pheng, it’s lost time.

“What frustrates me the most is that I don’t get to spend time with my children,” Pheng said.

In fall of 2012, Tou Pheng found an unexpected hope.

“One day after taking an exam in class I was talking to a classmate about child support and he had told me about the program called the FATHER Project,” Pheng said. “He told me that they have their own attorney, a person who explains your legal rights. They help figure out your child support. At first I was kind of skeptical but I gave it a shot and every word that came out of his mouth about FATHER Project was true. To this day I am still a proud member.”|

He began attending Parenting Support Groups with other Hmong dads.

“What was missing in my life was the support,” Pheng said. “I want to become a better father, and to do that I needed steady employment and going to school to get my education. My family was always there, but I never listened. Most importantly, if I knew about FATHER Project five years ago I would never been in the situation I’m in now.”
Connecting with other dads about playing, guiding, disciplining and being a role model for his children has given him new direction and a restored hope.

“What I’ve been doing to strive myself to get closer to them is staying employed at the auto shop where I have been currently working for two years now, plus I am pursuing my auto service degree,” Pheng said. “The FATHER Project got me certified in mentoring and is still helping me to fight for visitation or custody of my two little boys.”

Today, Tou Pheng is giving back. In June, he began co-facilitating Parenting Support Groups for other Hmong dads. He still misses his children, but he is convinced that he is taking the correct steps to obtain court ordered time with his them.

“At the end of this year I see myself getting joint custody of my two little boys,” Pheng said. “I will be closer to getting certified as a mechanic. At the end of this year it will be my third year working at the auto shop. I will still be with FATHER Project helping out with fathers who needs guidance or support to become the best father they can be.”