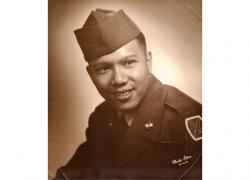 Photo of Bing Wong, courtesy of his daughter Betsy Wong.

In the spirit of honoring the 100th Anniversary of the founding of the Republic of China, the Minnesota Chinese community is working to better honor its history of more than a century in this state. Here in the Twin Cities, a coalition of individuals and Chinese American organizations have formed the ROC (Taiwan) Centennial Commission of Minnesota. Together they join ROC Chinese communities around the world in a year of celebrating and commemorating an historical century that saw China emerge from the rule of emperors to usher in a democratic republic.

Rebellion led to the founding of the Republic of China in 1911, and after WWII the Communist Revolution of 1949 has since moved the ROC to the government of Taiwan.

According to the Historical Society, “Minnesota’s first Chinese settlers, fleeing racial violence in California, established scores of small businesses after they arrived in the late 1870s. Newspapers  published reports of the small Chinese community’s activities, including New Year’s festivities, marriages, and restaurant openings – as well as allegations of tong organized crime activity and of their political ties to China.

“Beginning in 1882 federal laws stopping Chinese immigration and denying citizenship put particular pressure on the community, which was also accused of resisting Americanization. By the 1960s, a new wave of immigrants, including students, businessmen, and professionals from both Mainland China, (Hong Kong) and Taiwan, began to bring new energy and issues to the state’s Chinese community.”

The existing photos and oral histories have been collected from descendents of these pioneering families. These photo, tape recordings and biographies have been documented and published in the Historical Society’s books including, “The Chinese in Minnesota,” an addition to The People of Minnesota series, which examines the rich history of our group from the early 1900s to 1970s.

The Chinese American Academic and Professional Association in Minnesota, an organization formed in the 1970s by largely Taiwanese immigrants and students, and the more recently founded Minnesota Chinese Cultural Services Center, an organization that looks to care for immigrant Chinese and elders, have picked up the torch in continuing the documenting of what has been overlooked and the more recently arriving Chinese in Minnesota.

The organizations are conducting interviews and collecting stories and photos featuring Chinese American history after the 1970s, and at the same time research more photo archives and family photo collection to add on what have been already preserved.

The “100 years – from 1911 to 2011” was inspired in part from a description in the book, noting that, “By 1910 the Chinese population had grown to nearly 400. This included more than 100 Chinese men in Iron Range towns, where they operated small businesses, including laundries, to meet the demands of the men who worked in lumber camps and mines.

Family life developed slowly in Minnesota’s early Chinese community and elsewhere in the United States, due to the restrictions of the immigration law, Chinese tradition, and the high cost of trans-Pacific travel. Nevertheless, at least six families were established in Minnesota before 1910.”

The current efforts looks to 1911 as a new beginning for Chinese American in Minnesota, establishing immigration patterns that soon led to many events such as the emerging cultural and social organizations, businesses, involving themselves in mainland politics and an active education exchange in China.

The project is working to collect more information about Chinese immigration history in Minnesota, from settling experiences and memories, to relationships and connections to historical events here and back in the homeland.

The project will include:

With this huge undertaking, the ROC Centennial group is calling on community support for this meaningful project. It is calling for help with:

The Centennial Group notes that a successful project will need talented people and the participation of the community to bring their histories forward for a grand project that will help to solidify the Chinese presence and ensure its contributions are not left “missing in history.”

The project is made possible by the Minnesota Historical Society’s Arts and Cultural Heritage Fund. All events are free and open to the public. Please check on http://roc100minnesota.org for more information and updates on future events.