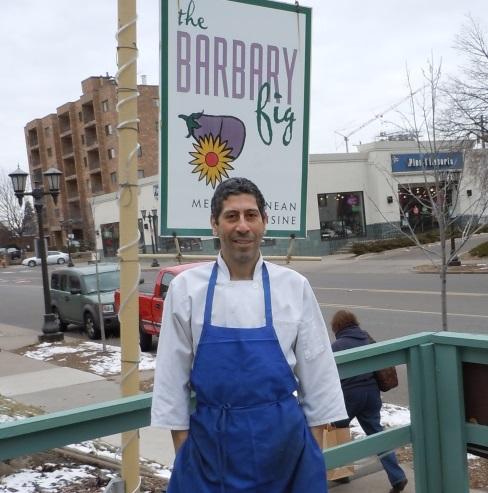 In 2012, Brahim Hadj‐Moussa (Hadj), owner of The Barbary Fig at 720 Grand Avenue accepted the offer made by MN Waste Wise for waste and recycling evaluation assistance. Waste Wise offered the service free of charge to Grand Avenue businesses in both 2011 and 2012 under a contract with Ramsey County which is a collaborative member of F.R.O.G. (For Recycling on Grand). FROG is a collaboration of the Summit Hill Association, Grand Avenue Business Association, Macalester Groveland Community Council, Ramsey County and the City of St. Paul.

While this assistance to The Barbary Fig was targeted at finding ways to recycle food waste and other organic materials, the initial site visit also focused on general recycling. This site visit was followed by a number of check‐ins, and recommendations were made throughout the year. At the time of the initial site visit, Hadj was already re‐using vegetable trimmings, meat scraps, and bones for soup stock and bringing home the majority of its food waste to compost in his and his neighbors’ backyard compost piles. In addition, he was bringing home cardboard, paper and cans to recycle, re‐using old grocery bags for to‐go orders, and utilizing scrap paper for all notes and orders.

Recommendations from the initial site visit included utilizing a free dropoff site for organic materials and considering options for an organics recycling program. However, on a follow up site visit later in the year, Waste Wise noticed that The Barbary Fig’s waste bills seemed to be quite high for the service that was being provided. In addition, Hadj mentioned being dissatisfied with the customer service of his current hauler. Specifically, he had made multiple phone calls to inquire about his service, but never received answers. Because of this, Waste Wise recommended getting competing price quotes from several other local hauling companies.

The bids were compared and within about a week of referring The Barbary Fig to a new local hauler, Hadj had switched his waste contracts. With his new hauler, The Barbary Fig was able to go from every two weeks to weekly trash service and was able to add a single stream recycling service, which will be able to divert an estimated 1682 pounds of single stream co‐mingled materials per year. The new waste contracts are over 65 percent cheaper than the former contracts, saving The Barbary Fig $1721 per year. Best of all, Hadj now has established a personal relationship with a sales representative at the new hauler, so they can easily call to discuss service issues.

Mr. Hadj‐Moussa is so pleased with the new service that he has switched his home recycling as well and encouraged his neighbors to do the same. “I think Waste Wise was great to connect me with this other company. This is a stepping stone for a better relationship. I couldn’t have had the personal connection with their sales rep without Waste Wise.”