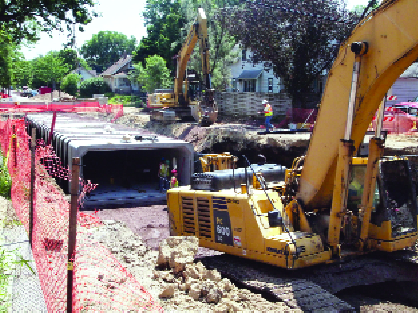 “What are they doing on the Camden Bridge? And it seems like it’s taking forever!”

Questions like this were answered at City Council President Barbara Johnson’s 4th Ward Public Works Update July 26, a breakfast at Lowry Cafe with about 30 people attending.

The Camden Bridge repainting project “is one of seven that had to be ordered stopped during the state shutdown,” said Brette Heille, a public works representative. Work restarted July 25 and is expected to be done near the end of September. A section of railing from the tornado on the north side of the bridge over I-94, the Minnesota Department of Transportation’s portion of the bridge, is missing because of tornado damage. The north sidewalk will remain closed until that is fixed.

Sandblasting and painting are taking place behind enclosures that keep materials from falling into the river, said project manager Ole Mersinger in a voice mail. They say it’s too dangerous for anyone but workers to be in that environment, but you can see progress from below at the Camden boat launch and fishing area. Most of what is left is painting.

Penn Avenue will be shut down from Dowling to 36th for two weeks ending August 8, to almost finish the below-ground work on the 37th Avenue Greenway. Crews have been installing box culverts to catch the area’s storm water, clean it and release it slowly on its way to Crystal Lake, where most of the water comes from storm runoff, Johnson said.

She mentioned a flood pond at 42nd and Russell that works to keep potential flood water out of nearby homes.

The greenway area runs from Knox, past Penn half-way to Queen, and will eventually replace 37th Avenue with a winding “bike and walking amenity,” Heille said. Special police details will be watching the rerouted traffic on side streets during the Penn closure.

Other public works projects in the area include Shingle Creek project area water main cleaning and lining. This will be all done by end of August, a first phase is already done. This “very cost effective” process keeps iron deposits from forming inside the old iron water mains, “it helps red water, a localized issue where there’s low flow.” It’s not directly assessed to each property owner, but is part of the overall city water maintenance budget. “We’re doing it in three phases because there’s a lot of dead ends” at this farthest point in the city, Heille said.

Fremont Avenue North has been seal coated, and 49th Avenue will be resurfaced in mid to late August, the work taking four to five days and likely some of the work will be on the weekend to avoid conflicts with businesses.

It was reported that there is now enough money assembled to fix the Plymouth Avenue Bridge. However, as Public Works Director Steve Kotke wrote, “due to the unique nature of the repairs it will require all the work to be performed in a consecutive manner over several months, therefore, the repairs will not be able to begin until next spring.”

Tornado reconstruction: Repairs on damaged traffic signals, street lights and signs should be complete in the next few days. Johnson said, “We were able to do some upgrades,” replacing signal lights on the corners with overheads “which are far safer.” She said that, like on some residential properties, damages have been more severe than first thought, as structures appeared to resist the twisting action of the tornado but were actually weakened and need repair or replacement.

About the letters from city inspectors that have gone out to probably 10,000 homes saying damage has to be fixed by end of July, “We’re getting a little push back on our inspections,” Johnson said. She said inspectors, when residents call them, are granting liberal extensions. “We need people to have a plan in place,” before winter, she said. “We have a group that will help mediate with insurance companies.”

Jon Olson, District 2 Park Board Commissioner, said more would have happened with trees by now, “but we had to meet FEMA requirements and document every tree with measurements and GPS.” Conifer tree stumps in Folwell Park are out, Roberta Englund of Folwell Neighborhood Association said, and Webber Park Neighborhood will be done soon. After that, Forestry will be working from north to south in the tornado zone removing stumps from boulevards and making it possible for sidewalk work to begin.

Folwell Park will be the site for an Arbor Day event in 2012, Englund said; 216 trees were lost there. Overall, tree replacement will take place next year, and the species variety will be greater.

Breakfast attendees also asked about other bike paths: there are plans to mark 49th Avenue N from Osseo Road to Humboldt, and special striping for lanes on Emerson and Fremont’s one-ways.

Some traffic circles are planned for “the St. Bridget’s block” and a “throat closure” is planned for 33rd and Emerson, to slow down vehicle traffic.

Johnson said, regarding a question about coordinating the city and county to address the pedestrian-unfriendly intersection of Penn, Osseo Road and 44th, “there’s been talk of trying some of the (proposed) closures, but that hasn’t happened.”