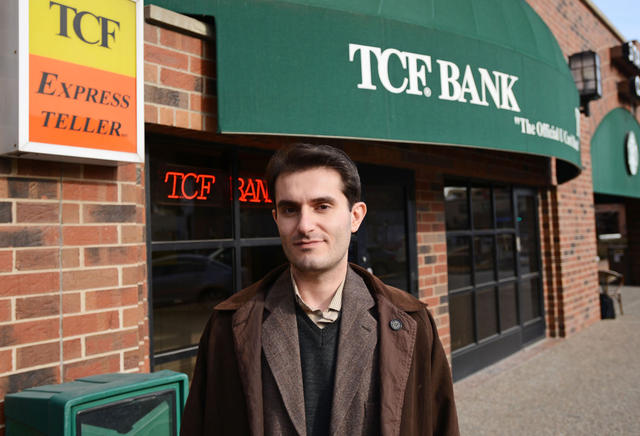 Graduate student Alireza Asary was one of several Iranian University of Minnesota students notified in December 2012 by TCF Bank that their accounts would be closed. The University is currently working to help resolve eight cases. (Photo by Jaak Jensen)

A group of University of Minnesota faculty members will begin moving their TCF direct deposits to other banks this week in protest of the closing of several Iranian students’ accounts.

At least eight Iranian students received a letter during winter break saying their TCF Bank accounts would be closed in January. The letter offered no explanation, but TCF said it was adhering to rules and regulations and would examine each case on an individual basis if the students contacted the bank.

The University faculty members planning to move their direct deposits drafted a letter to send to TCF outlining their actions. The letter refers to the closure of the Iranian students’ accounts as “textbook prejudice.”

Because the University has a royalty agreement with TCF Bank, students can choose to link their TCF account to their U Card for free, but it’s not required, said Leslie Bowman, University executive director of contract administration.

When public health graduate student Alireza Asary received a letter stating that his TCF accounts would be closed Jan. 29, he said he was “quite shocked.”

Asary, an Iranian student studying in the U.S. with a student visa, said he was first concerned when he tried to use his checking account but was denied.

Of the 67 Iranian students at the University, International Student and Scholar Services has heard from between eight and 14 who said they received this letter, said Meredith McQuaid, associate vice president and dean for international programs.

Asary said he knew of at least 21 Iranian students who received the letter.

Now, faculty members from across the University are sending their own letter.

Addressed to the TCF vice president and executives, the letter outlines the faculty members’ disappointment with the closures and the bank’s handling of the aftermath, relaying that the group will begin to move their direct deposits to other banks this week.

“We no longer feel comfortable having TCF be the responsible institution for our deposits,” the faculty wrote in the letter.

Faculty members will also begin to close their mortgages and other accounts with the bank if TCF continues “with such anti-social tactics without apology and with impunity.”

Asary said he was very happy to hear that the faculty members were planning to protest the closures.

Jason Korstange, a TCF spokesman, said the bank sent closure letters to more than just students and Iranian individuals and that not every Iranian student at the University received a letter.

He said TCF closes many accounts every month for reasons like nonuse or if the account has been overdrawn, but in this case, some of the transactions were “problematic.”

With most foreign students, he said, they try to find out where the money from a transaction is coming from. If the money comes from organizations they can’t accept, they have to refuse it or close the account.

Nearly all trade and investment activities “with Iran by U.S. persons, wherever located, are prohibited,” according to the U.S. Department of the Treasury’s Office of Foreign Assets Control.

In addition, U.S. depository institutions can’t process transfers that involve Iran even if they originate and end with non-Iranian foreign banks.

But the Iranian students didn’t seem to be involved in any irregular banking activity, said anthropology professor and chair William Beeman, who has worked closely with the students.

Asary said his account activity included depositing money he brought with him to the U.S., making online purchases and using his account for shopping.

Besides an overdraft fee and a $5 donation to Wikipedia, he said he didn’t use his account for anything unordinary. He also said he made no international transactions.

After receiving the closure letter, Asary said he followed up with the bank to determine the cause. In response, he was sent a questionnaire asking him how he anticipated using his account in the future, which Korstange said is part of standard procedure.

Since Asary said he didn’t know how to answer some of the questions, he consulted with the University Student Legal Service, where he was advised to close his account to avoid an involuntary account closure.

McQuaid said the University understands that TCF must follow federal rules and regulations but told the bank it would have liked to have been contacted before the students were sent the letter.

“We have let them know very strongly that this is upsetting to us,” she said.

Korstange said if something of this nature happened again, TCF would contact the University in advance.

“We did not contact them before, and we apologize for that,” he said.

Asary said he believes TCF should be held accountable, and the University should continue to search for answers because the Iranian students haven’t had success.

“We do not have any power.”