It’s been almost two years since the privately-run prison in Appleton has held prisoners. But in early 2012, the prison’s owner, Corrections Corporation of America (CCA), expects to fill Appleton’s Prairie Correctional Facility and another facility in Colorado with 3,256 inmates from California.

In the last ten years, the revenue of CCA, the country’s biggest private prison company, has almost doubled, according to their annual reports. Critics say that CCA’s success, and even the likely reopening of the prison in Appleton, stems from their use of lobbying and campaign donations to push through tougher crime laws and increase detainment of illegal immigrants.

“Prison privatization contracts are designed by policy makers. It’s important for these companies to have a political strategy to increase their market share,” Paul Ashton, author of a recent report on private prisons for the Justice Policy Institute, said in a conference call Wednesday. Private prison companies “game the system,” he said, by pushing to increase market share, which in the private prison business means putting more people in prison.

For two decades, CCA was a member of a group called the American Legislative Exchange Council (ALEC) — a nationwide organization made up of corporations and state legislators. At an ALEC meeting in December 2009, where CCA employees were present, according to NPR’s reporting, the group crafted the model legislation that would later become Arizona’s SB1070 and a host of other similar bills across the country.

CCA and other private prison company executives saw immigration detainees as a significant new source of revenue, as NPR reported. Although CCA denied pushing the Arizona bill, and has since given up membership in ALEC, lobbyists from the private prison industry flooded the Arizona State Capitol and donations streamed to the bill’s supporters, ensuring its passage.

Even without Arizona-style laws in place in most states, the number of inmates held in private prisons for federal crimes, including immigration-related crimes, has continued to rise. For federal prisoners with more than a one-year sentence, immigration crimes now rank third behind drug and gun charges. In the last decade, the number of people held in federal private prisons more than doubled, according to U.S. Department of Justice statistics (PDF) from December 2010.

Private prison industry efforts to influence policy at the federal level continue. In 2011, CCA has already employed 35 federal lobbyists, according to the Center for Responsive Politics. The bills CCA has lobbied on this year include a number of appropriations related to Homeland Security and Immigration and Customs Enforcement (ICE) detentions, which made up 12 percent of the company’s revenue last year, according to CCA’s 2010 annual report.

In last month’s quarterly statement, the company announced a quarterly revenue increase of 5.6 percent, which the company largely attributed to new federal contracts.

CCA didn’t respond to repeated requests for comment, but in other statements they have denied that they try to influence the political process.

Paul Ashton told The Minnesota Independent that many of the legislative policies CCA was close to as a longtime member of ALEC, for instance the “three-strikes-you’re-out” rule, benefit the company’s bottom line.

In the wake of the Arizona-style bills, the private prison industry hasn’t gotten complacent. State contracts like the one expected between California and CCA to house prisoners in the Appleton facility, account for about half of CCA’s steadily growing business, with California making up about a quarter of that. 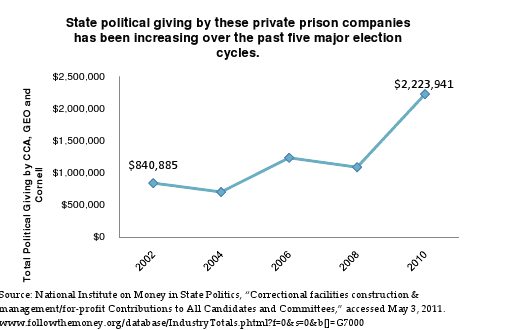 California, which will provide the 3,256 inmates that will likely fill Minnesota and Colorado prisons, is another state that has been targeted by the private prison industry. (The California Department of Corrections and Rehabilitation has announced its intent to award the contract, but a spokesman is unsure when it will be awarded due to a statewide prison reorganization happening now; the company is confident the award’s on track, according to a recent quarterly filing.)

Between 2003-2010, CCA’s PAC gave more than half a million dollars to California political campaigns, according to the Justice Policy Institute report, with the vast majority coming to 75 separate candidates between 2008 and 2010, according to data compiled by the National Institute on Money in State Politics.

CCA’s California investment looks to have paid off. CCA ”continued to receive additional inmates from the state of California throughout 2009 and 2010 as they have turned to the private sector to help alleviate their overcrowded correctional system,” according to CCA’s 2010 annual report.

Similar attempts at prison privatizations are occurring in Florida, where CCA employed an army of 17 lobbyists and donated $438,494 to state political campaigns between 2003-2011, according to the National Institute on Money in State Politics. Industry rivals Geo Group and a subsidiary donated $822,415 in just the 2010 election cycle, with large chunks of cash going to the Republican Party of Florida, although the industry plays both sides of the aisle.

Steve Owen, CCA’s director of marketing and communications, told our sister site, The Florida Independent last year that opposition to private prisons was usually stirred up by labor unions or ideology.

“Given tightening budgets and limited resources during these challenging economic times, legislators and other officials are increasingly turning to correctional partnerships, enabling them to protect critical priorities like education and health care while delivering safe, quality correctional and rehabilitation services,” Owen said.

A recent study (PDF) by the Arizona Department of Corrections found that private prisons don’t really save states money, as the New York Times reported.

Because of lobbying reporting, it’s also most difficult to track the industry’s lobbying expenditures at the state level.

“They can be a lot more influential on the state level than they can on the federal level, because campaign contributions mean a lot more at the state level than at the federal level,” Ashton said. “Federal candidates tend to bring in money anyway, whereas CCA or GEO [a rival company] giving $25,000 to the Republican Party in Florida can have a huge impact on how the parties spend money on their candidates, as a result it gives a closer tie to the industry.”

One thousand seven hundred fifty miles from L.A. to Appleton

CCA and other private prison companies are doing very well. In 2010, CCA saw total revenue of $1.67 billion, according to CCA’s annual report. But there is a human cost to the industry too.

Amy Gottlieb of the American Friends Service Committee told the Minnesota Independent that prisoners transferred to other states often face both emotional and legal hurdles.

According to CCA’s website, one of the benefits of out-of-state inmate management is that the company will “[a]dhere to state-specific policies and procedures, as well as hundreds of standards set by the American Correctional Association and our company.”

But the fact that prisoners, including detained immigrants in some federal facilities, are being held in the less accountable private facilities is of concern to advocates like Gottlieb.

“We have seen over and over again that the private prison lobby is extremely powerful and they have deep connections to a lot of politicians and get a lot of federal contracts,” Gottlieb said. “That creates very serious concerns when what we are really talking about here are human rights and human rights violations.”