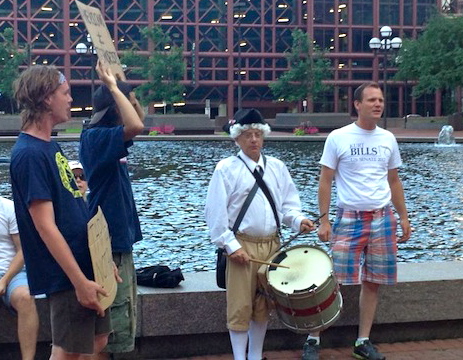 A few weeks ago, a friend of mine sent me a message that he was interested in helping organize a protest on July 4 against about the NSA spying scandal, as part of a national movement called Restore the Fourth, which was initially started on Reddit. Now, this was one of those situations that I really should have said, “I’d love to help out, but I probably shouldn’t because I’m a journalist and I really shouldn’t be getting involved with political causes.”

But of course, I didn’t decline, and instead offered some suggestions for people he could talk to and ended up going to one planning meeting. I don’t know if I was particularly helpful, and after that first meeting, I ended up flaking out on the rest of the planning until the actual protest, where I showed up to share a bullhorn that I had borrowed from a friend.

It was a modest protest. About 60 or 70 people came. There were some speeches, all by young men. There was one speech by a member of the Pirate Party. The FBI whistleblower Colleen Rowley was holding a peace sign. She didn’t give an official speech but did a lot of talking to people there, and gave some interviews. There was a man dressed up in an 18th century costume playing a drum. The protesters marched around the block a couple of times. All in all, I’d say it was a quiet, yet earnest affair, and I was happy for my friend that he took a stand for something he believed in.

Even though I wasn’t very involved with the planning, I did do a bit of reading up on what the whole Restore the Fourth movement was about. On the one hand, I absolutely feel that the recent revelations about the Prism program indicate an overstepping of our Fourth Amendment rights. Though the program is aimed at non-American citizens on foreign soil, it targets U.S. and Canadian-based communications channels, without any solid protections from the N.S.A. intermittently obtaining information from American citizens. (This Slate article explains how this works.)

On the other hand, I was put off a bit that Rand Paul declared his support for the Restore the Fourth movement and the fairly strong libertarian bent to much of the Reddit discussion. To me, the discussion about the NSA leaks hasn’t dealt at all with the fact that corporations themselves collect our personal information all they like and sell it to one another as commodities. Isn’t that just as disturbing, particularly given how much influence corporations have on government?

I don’t want the government spying on me, and I don’t want Google selling what they know about me to Walmart—or Facebook mining my information to sell ads to some pharmaceutical company.

I feel like people have a tendency to shrug the shoulders. In the case of the government’s spying, they say “Hey, I didn’t do anything wrong. I’m not a terrorist.” And in the case of corporations, they shrug their shoulders and say, ”Well, maybe you shouldn’t be on Facebook.”

There are two problems. There’s fear, which leads us to sign away our individual rights for the sake of protecting us from “terrorists.” Additionally, there’s a complacence with the control that corporations have on our lives. Somehow, simply using services such as email or social networking or even using a credit card or phone gives permission to companies to take whatever knowledge they can get of who we are use it to sell more products and services.

What are we supposed to do? Go off the grid? Live in a hovel? Sure, you might be able to quit Facebook if it isn’t part of your job (it is for me), but how could you manage to be functional without the use of email, or the ability to make transactions on the Internet? It’s the way the world works now, and at some point, it would be nice if some of our leaders would stand up for us and say enough is enough.

Unfortunately, it seems that’s not where the trend is headed. Whether it’s health care, security, education, etc., the current trend is to track everything for the sake of “efficiency.” The push is toward a world where not only does the government know who you talk to and where you go and what you buy, but so does a whole lot of companies that want to sell you stuff.

FYI, for more on Fourth Amendment privacy rights as they pertain to Minnesota, check out Rich Neumiester’s latest blog post.