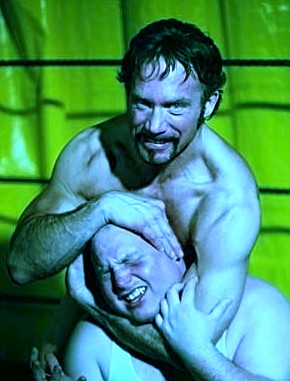 [This week, music writer Dwight Hobbes steps into the wrestling ring.] A proverbial good time was had by all Friday, May 25 as an easily thousand-strong, howling crowd cheered, booed, raising pandemonium for Prime Time Wrestling, Inc. at the Knights of Columbus in Bloomington. Affordable family fun ($10 adults, $6 children), this was quintessential entertainment meat-and-potatoes style. Fans spent, starting with opening match, hollering like hell, rooting for your guy to kick the living you know what about of the other guy. Prime Time Wrestling performers know how to sell a show. The audience gets completely wrapped up. Especially kids.

The headlining act was a dastardly duo versus heroes in halos. Villainous Prime Time Champion Lenny Lane and his diabolical henchman Billy Blaze in a splendid tag-team bout against a couple of baby-faces (good guys) Black Stallion and Chiropractor DC. Lane is your prototypical, strutting picture of obnoxious arrogance. Blaze is a master of the classic, evil maniac who gleefully strangles his opponent behind the ref’s back. They were an absolute hoot squaring off against their squeaky clean opponents. You had the heels (bad guys) using dirty tricks to throw everything but the kitchen sink at the Stallion and DC who, of course, played fair and square. Unlike in life, the valiant, upstanding heroes bravely come back from daunting adversity to act out the moral message, good will always conquer evil. Everyone knows how the match is going to end and nobody cares. It’s all about simply letting yourself go and having a good time.

The other tag-team match saw another old favorite for rasslin’ fans: women. The vixen “Lilly” Victoria Pederson and the darling Delanie Neal going at each other in that age-old institution, as the guy behind me hollered out, “Cat fight!” Quite honestly, they were, for guys at ringside, a whole lot more interesting than their male partners. Unfortunately, Pederson had landed on her foot the wrong way during rehearsal. So, the gals didn’t get to do very much and, in fact, never made it into the ring. They did, however, hook-up, rolling around on the floor, outside the ring, in a scrap that was convincing enough without further straining Pederson’s bum ankle.

There was also the requisite concession to xenophia with Arya “The Sheik” Daivari facing off against all-American figure Ryan Cruz. Naturally, the hotter the action the louder the crowd shouted “USA, USA!” As long as there’s been rasslin’, there’s a Middle East bad guy for everybody to boo.

At intermission it was cute to watch the young ‘uns crowd around the stars, eyes wide, programs held out to be autographed. And it wasn’t only children mobbing these guys. Like I said, a good time was had by all—without exception.

Prime Time Wrestling. Inc. is taking a few months off, but will be back in September for another six-month season a Knights of Columbus. Judging from the great time everyone had at the show, a whole lot people will be very happy to it back.