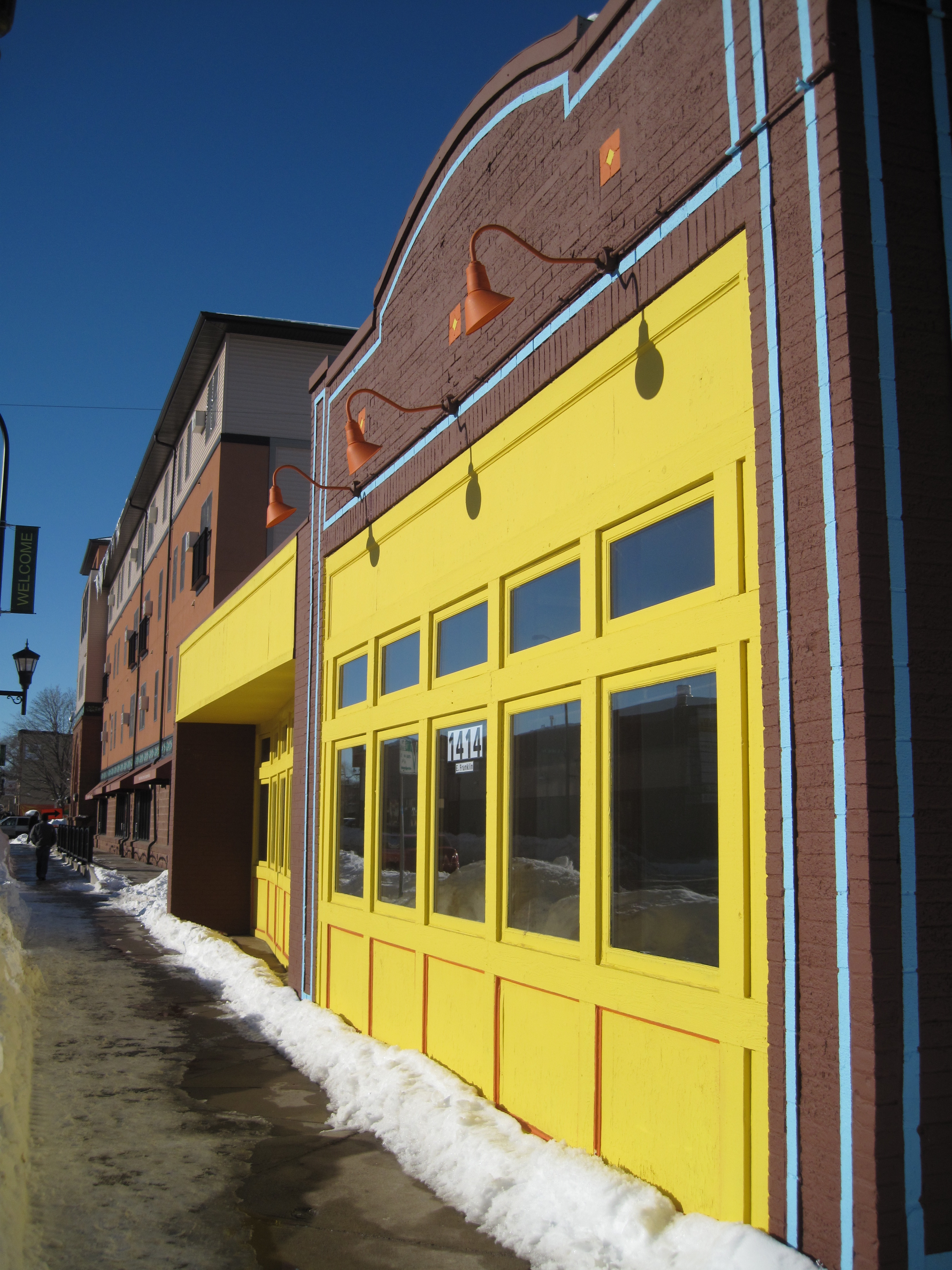 It’s a concept that makes logical sense:  Improving a street’s aesthetics will also improve commerce, reduce crime, and raise the pride of the residents.  Though it’s rather an abstract idea, which makes obtaining data to support the theory difficult, there certainly seems to be funding—both public and private—readily available for projects that seek to beautify neighborhoods.  Both public funding—such as Minneapolis’s Great Streets program, which includes façade improvement grants, and foundation funding have helped various districts—particularly commercial districts—look better.

Lake Street business districts
Joyce Wisdom, Executive Director of the Lake Street Council, said that the council has participated in Minneapolis’s Fix and Paint Program and the program that replaced it, the Façade Improvement Program for decades.  “We are really seeing a change in the visual welcoming in our buildings on Lake Street,” she said.

The old Fix and Paint program paid for infrastructure as well as façade, Wisdom said.  At first the council was against the idea of taking funding for infrastructure away.  Though Wisdom wrote letters to the city supporting program continuation, in retrospect, she said it was a good idea to scale the program back.  There are limited resources, and by only funding façade improvements, the city allows owners to do other infrastructure changes on their own.  Wisdom said that when an owner improves their façade through the program, it encourages other neighbors to make that investment.

The Lake Street Council gets $50,000 every two years for the program, and Wisdom said this year was the first year they spent all the money in one year.  “We are seeing an increase in property owners wanting to make improvements,” she said.

Wisdom prefers alterations like adding tuck-pointing to brick buildings:  “It’s not so visible and yet if you look at the pictures—it’s so visible,” she said.  The council discourages improvements such as awnings. Although they are a quick bright change, they don’t last that long, and they usually have business names on them.  If the business fails, than that investment goes by the wayside.

Wisdom said that the council has a hard time tracking the effects of the program, but based on a survey, they believe there’s a bout an 18 percent increase in sales tax revenues- The Lake Street Council program includes not just the façade improvements, but also aggressive marketing.

One of Wisdom’s favorite façade improvements was to High Point Center for Printmaking. They removed stucco and restored the brick exterior wall, and installed a new entrance, leveraging $5,000 in façade improvement grant dollars to raise $30,500 in matching private funds.

Lake Street businesses have also invested in making the streets cleaner.  Businesses on Lake Street are a part of a Special Service District, which means that commercial property owners pay to keep the streets cleaned, financing the cleaning through a special assessment that’s levied on commercial property owners. The Lake Street Council’s Board determines what services they’ll contract for, and the city then places the contracts. That, in addition to increased police security, has led to a decrease in crime: “Clean is tied to safe,” Wisdom said.

The Lake Street Council has also supported a green wall, at the Family Dollar store on 10th and Lake Street in order to deter graffiti.  Wisdom also said that Lake Street’s many new murals “really do work in deterring graffiti.”

Beautification on Broadway
On the North Side of Minneapolis, the West Broadway Business and Area Coalition (WBC) has been awarded grants from the McKnight Foundation and the City of Minneapolis ($98,000 total) to provide matching funds for artist-designed façade improvements for properties along the West Broadway Corridor. WBC’s website states that ultimately the hope is for the area to be branded as an “Arts Street.”

Connie Beckers, who served as the Executive Director for the Northside Artist Collective (NAC) until 2009 and was a key player in developing the artist-designed facades, said that the project works on several levels.  It raises pride in the community, creates a destination for people from the outside of the community to come and see something different, and raises the level of credibility for the community.

Another Northside development includes the Five Points building (formerly known to  as Delisi’s) located at the corner of Penn and West Broadway. Redevelopment of this building, where the radio station KMOJ has recently relocated, has been spearheaded by the Ackerberg group, with funding from Franklin Bank, Metropolitan Council Metropolitan Livable Communities Fund, Hennepin County, Northside Arts Collective, the City of Minneapolis, LISC, and McKnight. 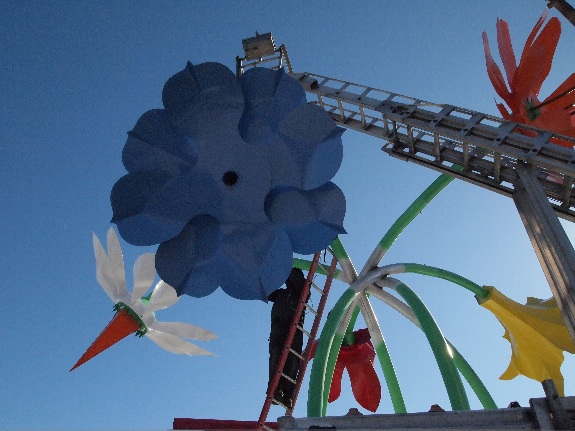 A circular bus shelter, which doubles as a piece of art (above, photo courtesy of North News), will be completed in the 2,300 square foot plaza adjacent to the Five Points Building. The shelter itself looks like a vase with giant flowers coming out of the top.  Mary Altman the Public Arts Administrator for Minneapolis, said that the beautification to the plaza will enliven the corner, and make the building an attraction.  It will also provide a destination, which planners hope will attract a restaurant owner, she said.

Beginning in 1956,  more than 70,000 American Indian people left reservation commuties for cities such as Los Angeles, Chicago, Denver, Portland in Minneapolis, according to Justin Heunneman, Executive Director of NACDI, who spoke of the history of Franklin Ave at a tour last fall.  Unfortunately, many of those who moved to urban areas didn’t encounter the prosperity that they hoped for, instead struggling to find work and decent housing. “In the late 60s and 70s,” Heunnemann said, “Franklin Avenue was like Skid Row.”

Several years ago, NACDI developed an initiative to develop Franklin Ave as the American Indian Cultural Corridor, starting at Cedar Avenue and stretching down to 11th Avenue.  The cultural corridor is a key part of NACDI’s mission to build alliances among businesses and organizations and improve the economic and cultural vitality of neighborhood.

Some of the projects that NACDI has been involved with include partnering with All My Relations, an art program formerly housed at Ancient Traders Gallery.  NACDI and AMR recently opened All My Relations art gallery on Franklin Avenue that provides destination location for the Avenue. Painted bright yellow, with designs from AMR’s logo, the gallery serves as a landmark for the area, branding the location with the American Indian identity.   Sam Olbekson, the architect for the project, said the bold and contrasting exterior colors “highlight the presence of the gallery along Franklin Avenue and give this small building fresh and optimistic aesthetic identity to match the optimism of a community growing stronger.”

As a result of efforts of community organizations and the Native community, as well as the addition of mass transit and urban development, “this throwaway community has become a hotspot,” Justin Heunemann said.

While remains to be seen how much effect some of these investments will have on neighborhoods, but even for the projects still in progress, there is a noticeable difference, at least in the look of these areas. The stakeholders, including the residents of these areas, hope that a little facelift will have a deeper impact.