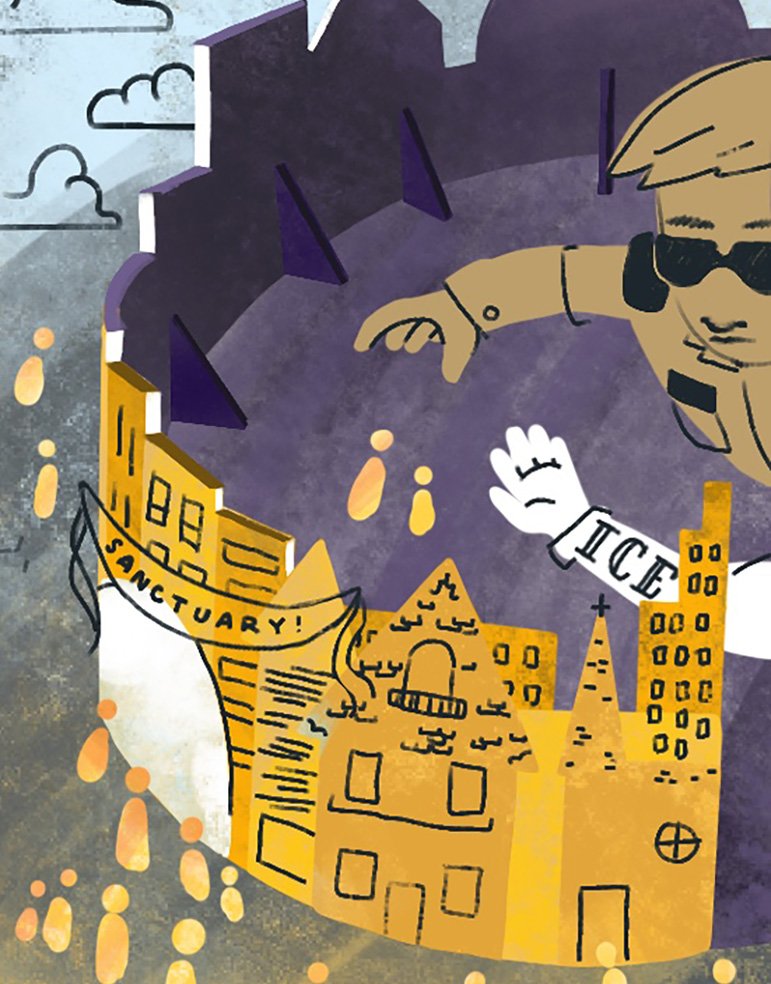 In a tweet shared this April, President Trump said he is “giving strong considerations to placing Illegal Immigrants in Sanctuary Cities only.” The tweet came mere hours after both the Department of Homeland Security and a White House official insisted that that idea had been rejected. When asked about the verity of their statement, the president equivocated. His only political conviction, of course, is to continue casting people seeking refuge at our border as burdens to bear. And yet, amid the sound and fury of all the politicking, cities that call themselves sanctuaries stand to be impacted the most.

But what exactly it means to be a “sanctuary city” remains unclear.

Mainstream news outlets reporting on the possibility of migrant groups at the U.S.-Mexico border being sent to sanctuary cities, displayed maps identifying which cities were sanctuary; and in many of those maps, Minneapolis and St. Paul were listed. The important distinction here, however, is that neither Minneapolis Mayor Jacob Frey nor St. Paul Mayor Melvin Carter have actually designated their city as a “sanctuary city.”

Following the lead of their predecessors, former mayors Betsy Hodges and Chris Coleman, both say their cities welcome immigrants but refrain from using the term “sanctuary city,” as it has no legal definition. “The city of Saint Paul is committed to making our community a welcoming and safe place for everyone,” said Mayor Carter. “We appreciate the partnership we have with Ramsey County to achieve this shared goal and keep families together.”

Although it hasn’t identified as a sanctuary city, the Twin Cities’ recent policy efforts would facilitate means for undocumented immigrants to exercise basic human rights. A recent proposal was passed by the state House to allow all residents to get driver’s licenses, regardless of their documented status. The city of Minneapolis, too, is in the midst of implementing municipal IDs, to give ease of identification to everyone. Moreover, the Twin Cities have previously established separation ordinances, meaning that city officials, including city law enforcement, cannot ask for someone’s immigration status, or arrest or detain someone based on their immigration status.

And in February 2017 Minnesota State Senator Patricia Torres Ray introduced a bill to make Minnesota a sanctuary state, extending the separation ordinances beyond the Twin Cities. Though the bill did not make it through committee, Sen. Torres Ray was determined to keep pushing for immigrant rights. “I think creating opportunities, creating welcoming cities for everyone, and welcoming schools for everyone is the right thing to do,” she said.

Disparities between city and county policies
For many cities, the complexities of achieving sanctuary status are further compounded by various state and federal jurisdictions. Though the city of Minneapolis has a separation ordinance, meaning that MPD cannot ask people about their immigration status or make arrests based on that, the sheriff, who operates at the level of the county, does not have to comply with that ordinance

Former Hennepin County Sheriff Richard Stanek has received much criticism for exceeding what was legally required of him in his cooperation with ICE. When people are arrested and booked in the Hennepin County jail, federal law requires their fingerprints taken and submitted to the FBI. Minnesota Regulation 2911.2500 states that among the questions an arrestee must answer is their place of birth. Then-Sheriff Stanek, in this instance, of his own volition, began cataloging people born outside of the U.S. and submitted this list to ICE. Detainees, then, were now singled out in a statewide database.

A consequence of this is that ICE agents can access the home address and court dates of the people on the sheriff’s list. ICE has appeared at the courthouse and arrested a client who was consulting with a public defender before their hearing. The Hennepin County Sheriff’s Office has also facilitated phone calls and visits between ICE and detainees who are born outside of the U.S. and in jail for issues not related to immigration. The former sheriff’s office did not respond to repeated requests for comment.

Hennepin County’s recently sworn in sheriff, Dave Hutchinson, campaigned largely on promises to end the office’s cooperation with ICE. Since taking office in January, Sheriff Hutchinson has said he and his staff have begun talking to attorneys about changing these practices.

According to a representative from his team, they are still working on the legalities of doing so. Even if Hutchinson does put an end to his office’s cooperation with ICE, he will have to work especially hard to repair trust with the immigration community living in Hennepin County.

Maintaining trust between immigrant communities and city police was a key factor in creating separation ordinances in the Twin Cities. It is much like the trust that will have to be maintained in the implementation of municipal IDs, both in its data-keeping practices and with the city police. When this trust is broken through actions at a county level, Hennepin County Chief Public Defender Mary Moriarty explains, crimes go unreported, as people are too afraid to be in any contact whatsoever with law enforcement. Actions at the county level are consequential, even able to jeopardize Minneapolis’ separation ordinance.

Moriarty supports Minneapolis’ addition of the list of rights in Spanish (and hopefully soon, other languages) to the backs of squad cars. She says this will help make it clearer to people who are arrested by the MPD that their immigration status does not need to be disclosed or play a role in the case for which they’ve been arrested.

It’s important to note that the policy is considered to be a guideline for ICE agents, not a hard rule. Since the last presidential inauguration, it’s been widely reported in national media that ICE has been pushing the boundaries on the policy, making arrests outside of schools and hospitals.

Some places of worship have noted the policy and used it to become sanctuaries themselves, as they have historically. In the 1980s, churches were already providing refuge for thousands of Central Americans who came to the U.S. seeking asylum. The first to do so was Tucson’s Southside Presbyterian Church, led by minister John Fife. In 1982, two years after the assassination of Archbishop Óscar Romero, who spoke out against poverty, social injustices and torture, Fife posted two banners reading, “This is a Sanctuary for the Oppressed of Central America” and “Immigration: do not profane the Sanctuary of God.” Other religious spaces soon followed suit, and with nearly 500 member sites emerging across the country by 1985, the Sanctuary movement became national.

In Minnesota, a network of faith-based communities formed ISAIAH in 2000 as a way to work collectively towards racial and economic equity in Minnesota. Among their many initiatives was the Sanctuary Network, a group of places of worship who have agreed to provide a home for immigrants in danger of deportation.

White Bear Unitarian Universalist Church is one church in this network. Lead by Reverend Victoria Safford, the church is an immigrant sanctuary, prepared to make space in their building for a family in need of refuge. While offering protections, they write in their Sanctuary Church Statement of Purpose that “we know that no church sanctuary can guarantee safety.”

A safer place
Both Moriarty and Sen. Torres Ray spoke to the importance of education and having challenging conversations about the social consequences of policy that energize xenophobia, racism and white nationalism. “Immigration is one of the most divisive topics there is, and I think that’s because there’s a lot of fear-mongering out there and misinformation,” said Moriarty. “I think we could go a long way in educating ourselves about who our immigrant neighbors are.”

Both Moriarty and Sen. Torres Ray are also hopeful that the high visibility of the administration’s policies will continue to galvanize people into political action, action that perhaps inspired the implementation of municipal IDs and more. Many do cite this political moment, as does Sen. Ray, as a catalyst for larger-scale changes, both at a personal and political level.

“I think people are much more aware of what a separation ordinance is, what sanctuary cities are, and how the cities relate to the federal government.”