All photos by Trang Do, all rights reserved.

Habitat for Humanity was founded in Americus, Georgia in 1976 by Millard and Linda Fuller. Since 1984, former President Jimmy Carter and Rosalynn Carter have spent one week each year working with Habitat for Humanity around the world. This year, the Carters helped to build 87 houses in honor of Jimmy Carter’s 87th birthday. The photos below come from the Twin Cities Jimmy and Rosalynn Carter Work Project, where 27 homes were repaired or built. 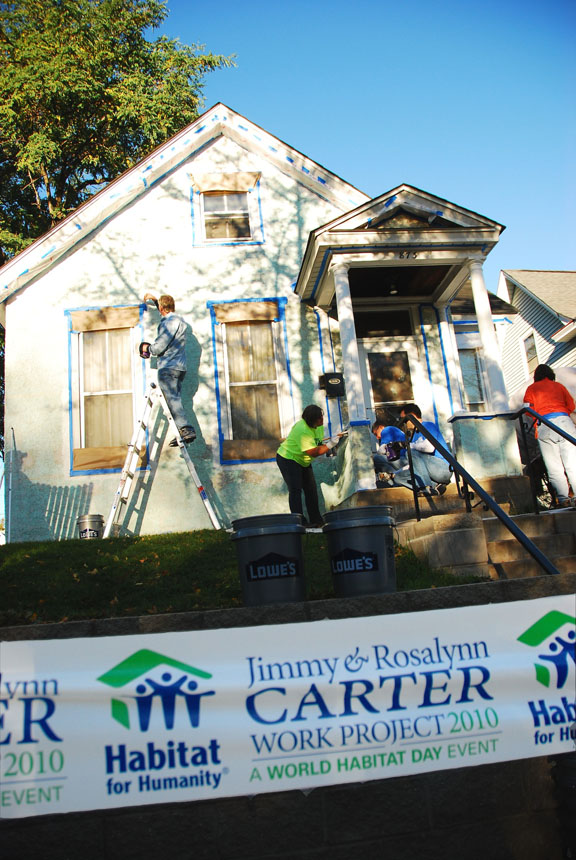 Twin Cities Habitat for Humanity had a unique experience in hosting the 27th Annual Jimmy and Rosalynn Carter Work Project. From October 3-8, twenty-seven homes were selected for work. This coincided with World Habitat Day on October 4 as part of a worldwide effort to focus upon the importance of stable communities and the need for greater access to healthy housing. 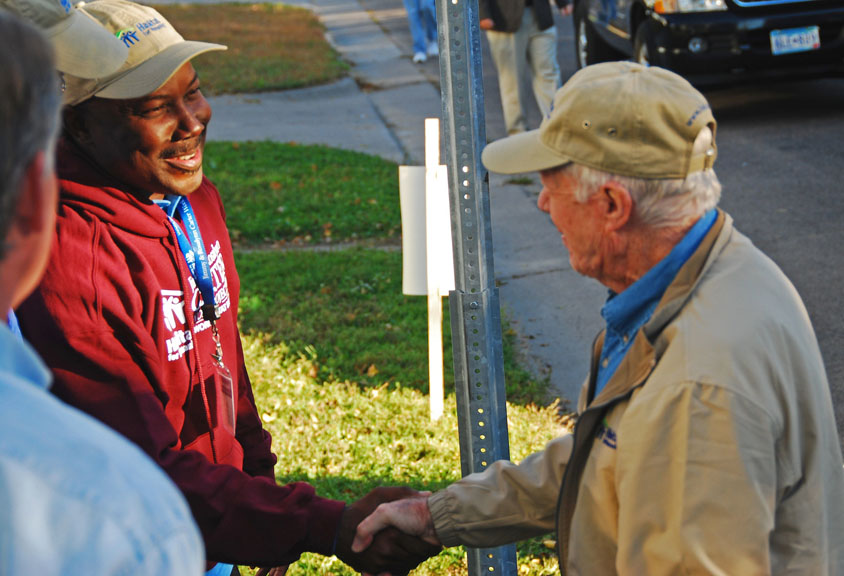 The Jimmy and Rosalynn Carter Work Project (JRCWP) is a neighborhood revitalization program that includes the building of new homes on the sites of foreclosed properties, renovating vacant homes, and repairing homes currently occupied by low-income homeowners through the A Brush with Kindness program. Former president Jimmy Carter and his partner Rosalynn are Habitat for Humanity’s most famous volunteers. 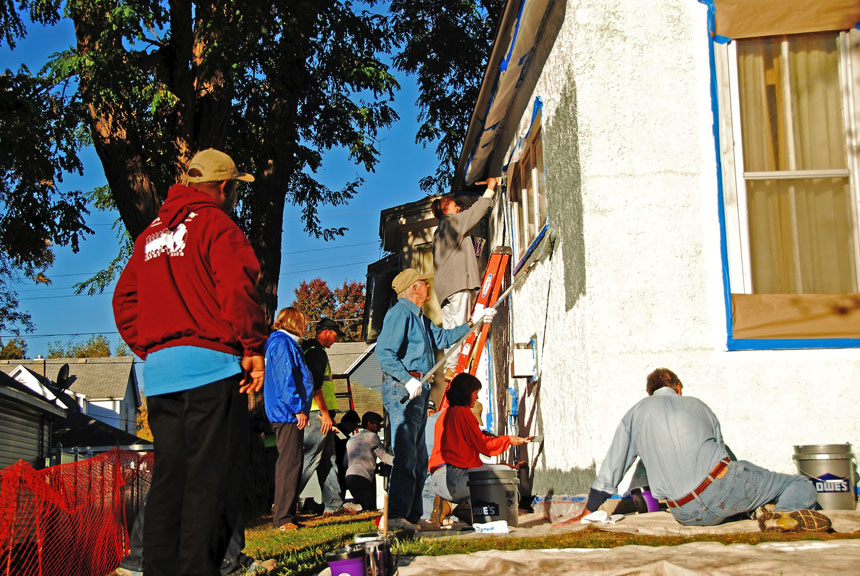 On Thursday, October 7th, Ms. Dannie Mae McKibbins, a resident of the Payne-Phalen neighborhood in Saint Paul, received a visit from President Carter who stopped by and helped to give her home a fresh coat of paint and worked with volunteers to repair the siding on her garage. She was in need of assistance to maintain her home due to her age and limited income. 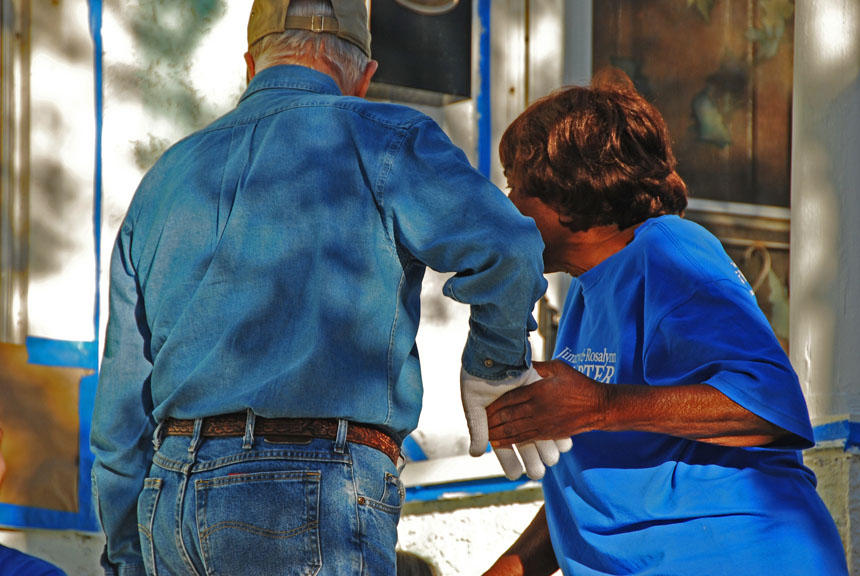 Ms. McKibbins was delighted to greet the former president as this was not the first time that she would meet President Carter. Many years previous, President Carter had spoken to the graduates of her nursing program at the University of Minnesota. The president had learned that Ms. McKibbins was the first African American to enroll and graduate from the school’s nursing program and that she had also grown up near from where he was living at the time. At the end of his speech he invited Dannie to drink a cup of coffee with him. 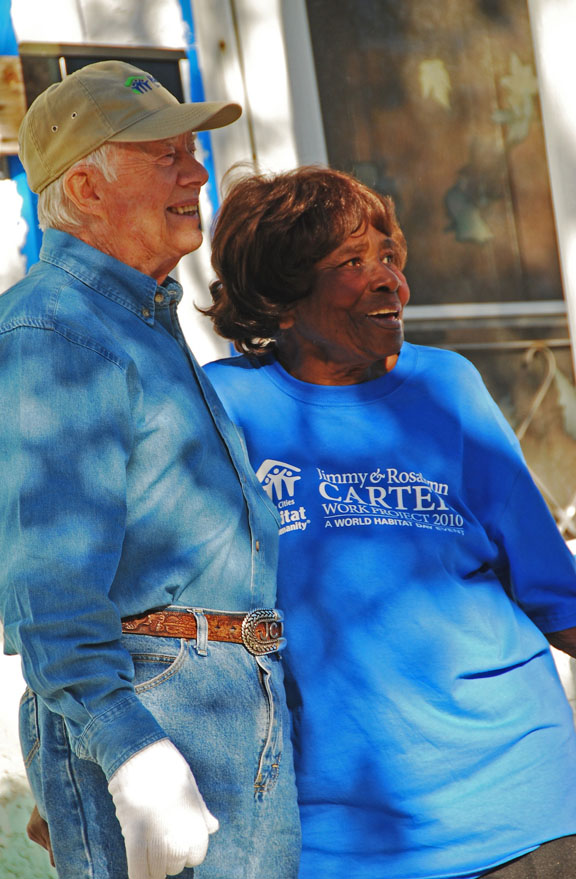 Ms. McKibbins was in high spirits to reunite with President Carter as well as see the support and effort of many Habitat volunteers in front of her home. 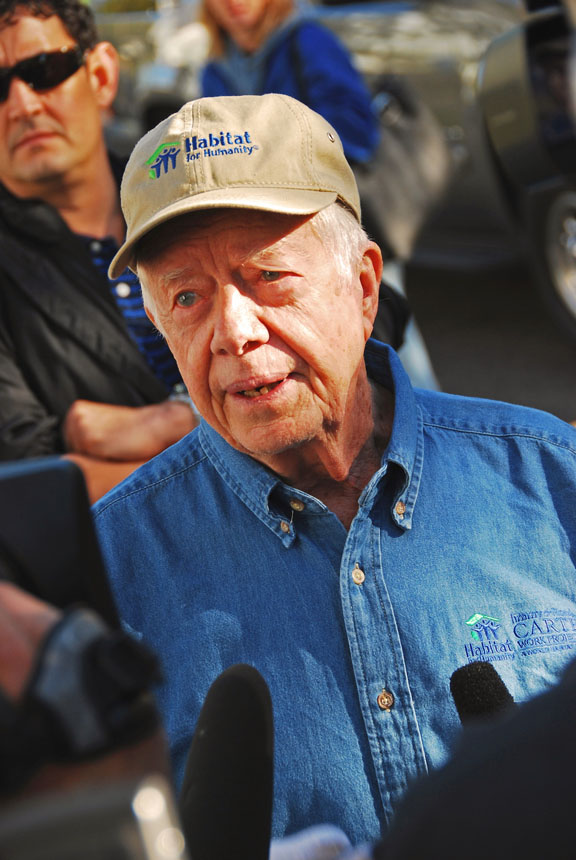 President Jimmy Carter took time out to answer questions and greet the neighbors of Ms. McKibbons. 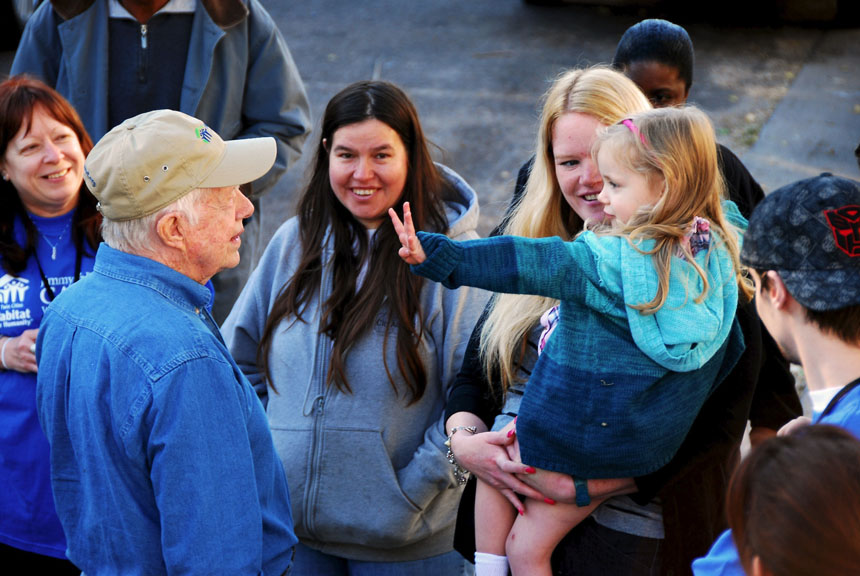 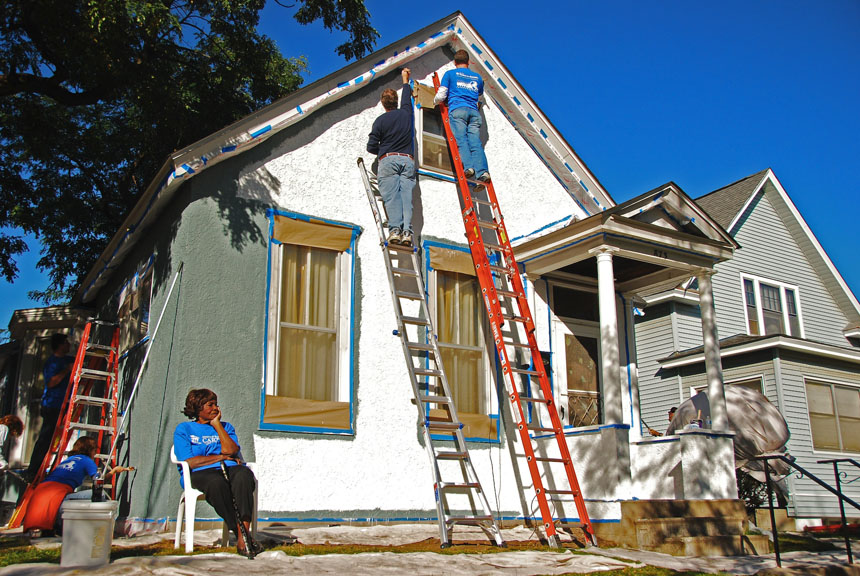 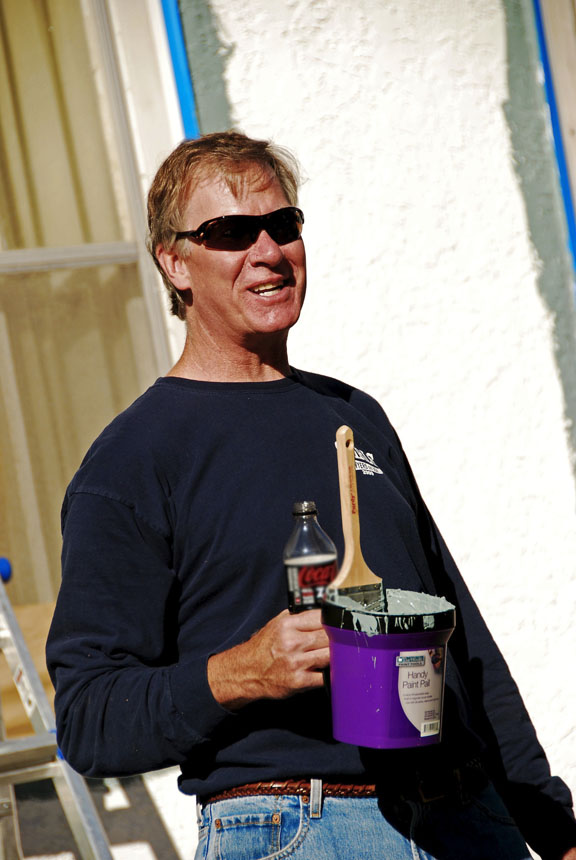 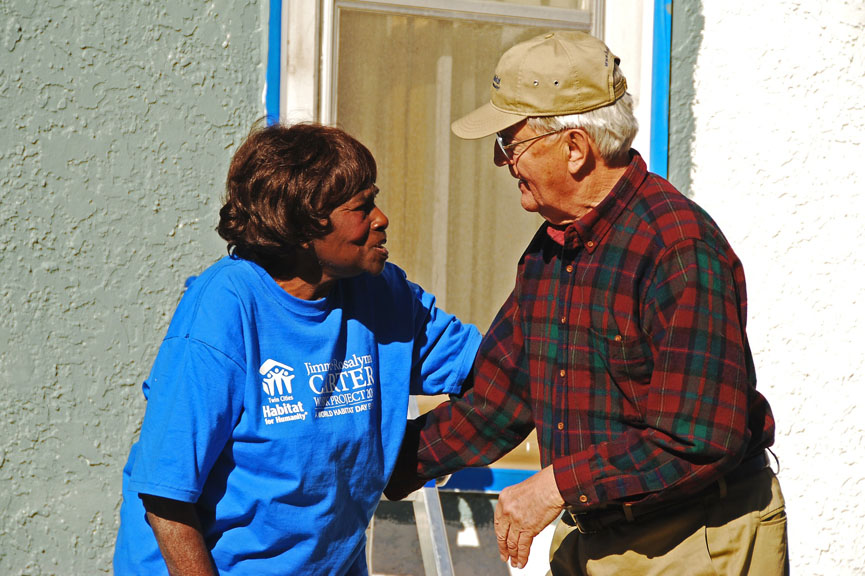 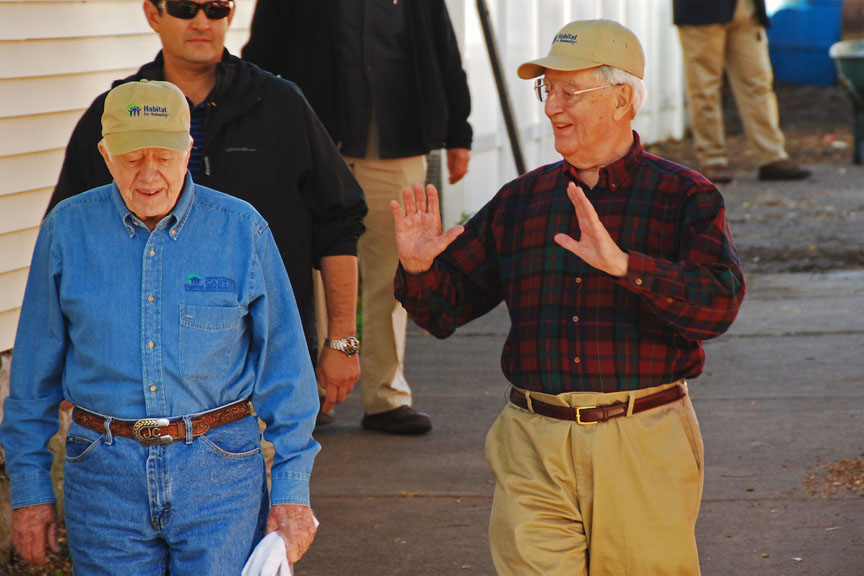 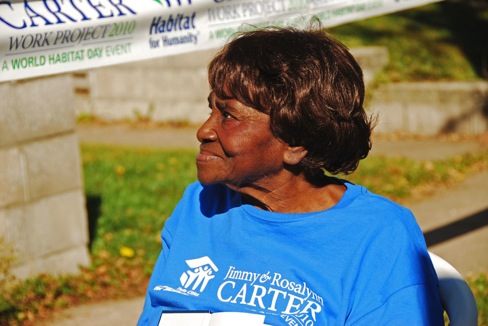 When asked about the selection of the new color of her home, Ms. Dannie Mae McKibbins said that she had not selected a color and that she thought it would be a nice surprise if Habitat for Humanity’s volunteers could choose. While watching the new paint dry on her home, Ms. McKibbins commented, “I am so thankful and pleased [of the effort of the community and volunteers], I feel very blessed.”