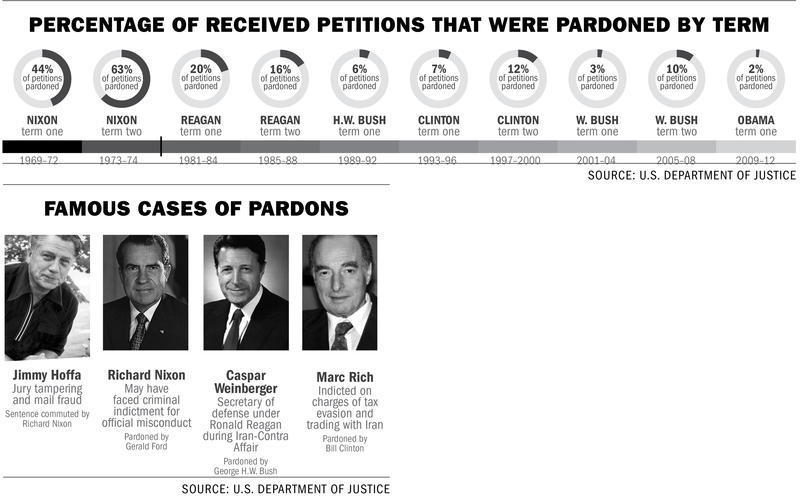 President Barack Obama pardoned two turkeys Nov. 21 in an annual Thanksgiving act of clemency. So far during his tenure, few prisoners have been as lucky.

Through his first four years in office, Obama has pardoned just 22 out of 1,200 applicants — a smaller fraction than any other modern president has in his first term, according to the United States Department of Justice.

But the president isn’t the only person that determines how many pardons get through.

The Office of the Pardon Attorney assists the executive branch by referring pardon applications to the president. The current pardon attorney is Ronald L. Rodgers, a former military judge who was appointed in 2008.

Mark Osler, law professor at the University of St. Thomas, said pardon power is an important part of the justice system. He said Rodgers is part of what Osler sees as the problem of Obama’s low pardon totals.

“He’s somebody who spent most of his career in the military and not in civilian criminal law,” Osler said. “Frankly he’s very stingy about recommending anyone for clemency.”

According to the U.S. Department of Justice, 381 pardon petitions were closed before the president could take action during Obama’s first four years, compared to 161 during George W. Bush’s first term.

For most of Bush’s presidency, the average number of pardons denied before the president could take action was 46 per year. Since 2008, when Rodgers was appointed, that number has more than doubled to about 104 cases per year.

David Adler, director of the Andrus Center for Public Policy at Boise State University, said he thinks of Obama as a president open to pardon-deserving applicants, but in general presidents won’t go against the pardon attorney’s recommendations.

“Those occasions when the president has acted on his own have led to some of the most controversial pardons in American history,” he said.

He pointed to Gerald Ford’s pardon of recently resigned President Richard Nixon as an example.

The presidential pardon was one of the few powers of the English kings that was bestowed upon the president by the founding fathers, Adler said.

He said there were a couple reasons the president was given the power to pardon.

The power was given to “correct miscarriages of justice” and end rebellions, he said.

The framers of the Constitution were wary of giving the president that kind of power, Adler said. He cited George H.W. Bush’s pardon of Ronald Reagan’s secretary of defense, who was a part of the Iran-Contra affair, as one of the most egregious uses of the executive power.

“That episode in 1992 probably reflected the framer’s greatest fear about the president exercising the pardon power,” he said.

Osler, a former federal prosecutor, said he’d like to see an overhaul in the pardon process. He said having the pardon attorney as part of the U.S. Department of Justice is a problem in itself.

“The Department of Justice … is an entire agency full of prosecutors,” Osler said. “And because of that there’s a natural disinclination towards clemency.”

Osler said most of the states have boards that oversee clemency, which would be a more favorable option than the federal system.

“In the states, for the most part, there’s a board that’s not in the Department of Justice that reports directly to the executive,” he said.

Though Obama’s pardon numbers are historically low, Adler said presidents tend to pardon more frequently in their second terms because they have less fear of public backlash after already being re-elected.

Christmas time is also a popular time for pardoning, Adler said, so there could be some in the coming weeks.

“Presidents have historically granted pardons [during the holidays] so that people who are near the end of their sentences can rejoin their families,” he said.