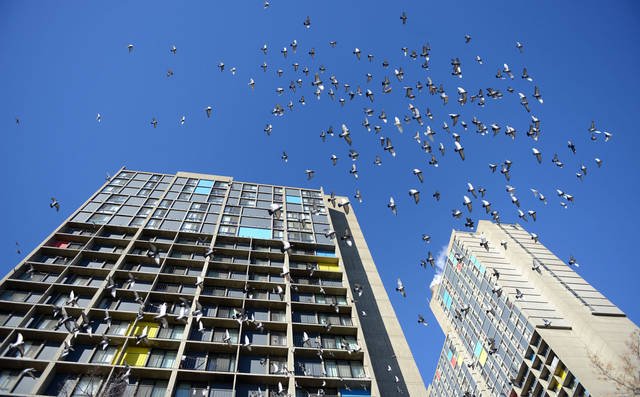 The U.S. Department of Housing and Urban Development (HUD) recently announced that it is recognizing Riverside Plaza with the 2013 HUD Secretary's Award for Excellence in Preservation. (Photo by Holly Peterson)

The federal government has recognized Riverside Plaza and its owners with an award for historic preservation following a recent renovation, but residents say some issues are still unresolved after the update.

The award comes about a year after Sherman completed a $132 million renovation on the 1,303-unit complex. The two agencies recognized Sherman for preserving historic aspects of Riverside Plaza while continuing to provide low- and moderate-income housing.

The award committee considered several factors when deciding this year’s winner, including how innovative the redesign was and how well the structure accommodates low-income residents, National Trust business manager Nicole Vann said. She said the award, while prestigious, carries no monetary prize.

“It’s about the recognition,” she said.

But many residents and community leaders say they are disappointed with the scope of the recent renovations.

Mohamed Jama, resident and general director of the Cedar Riverside Youth Council, said the Plaza’s managers have assured residents they will look into their concerns. But Jama said most of the issues raised remain unaddressed.

“Some of the [apartments] are still run-down,” he said. “We’re still having a hard time figuring out what is happening in terms of security and in terms of improvements.”

Jama said security is a major concern for many residents, especially since crime rates have been higher in the neighborhood than nearby areas in recent months.

“Sherman Associates, [which] houses more than 5,000 people, is not taking security concerns seriously,” he said.

Deqa Adan moved to Riverside Plaza four months ago and said she’s also worried about safety. People who don’t live in the Plaza got access after multiple spare keys disappeared from the complex’s office, she said.

“They didn’t inform anyone,” she said.

Adan said Sherman should allow more residents to take staff jobs at the Plaza instead of hiring from outside of the community.

“Any job that comes up, it should be [used] to give people in the community the opportunity to do better for themselves,” she said. “Apparently, that doesn’t work in Riverside Plaza.”

Completed in the early 1970s, Riverside Plaza was added to the National Register of Historic Places in 2010.

Preservation Alliance of Minnesota Executive Director Doug Gasek said the complex is emblematic of the “new towns in town” philosophy.

The concept stresses building schools and businesses into large new complexes to provide a new community rather than just housing, Gasek said. It was a popular design philosophy for large apartment and condominium complexes built in the 1960s and ’70s after the Plaza.

Gasek said the Plaza’s recent renovation will likely serve as a model for future upgrades to housing complexes built around the same time.

“It’s a project that really exemplifies how housing rehab can be done in a modernist building,” he said. “A lot of people will be looking to this project in the future to understand how to renovate architectural pieces from our recent past and incorporate housing in those buildings.”

Jama said moving forward, Riverside Plaza residents will continue to try to work with management to fix the problems, despite the lack of reception they say they’ve received so far.

“We’re hoping that the management takes the tenants seriously,” he said.