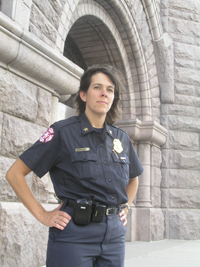 Kristi Rollwagen at City Hall: "The notion that it's all up to the government doesn't work."

The city’s emergency agencies are well-prepared for the initial response to a major natural disaster or terrorist attack, but there is much more planning to be done before officials say they will be ready to deal with the immediate aftermath of such an event.

Deputy city coordinator Rocco Forte told a City Council Committee last week that four years of planning in the wake of the September 11 terrorist attacks on New York City have left the city in a good position to deal with a major disaster. “We’re very strong in our plan for first responders,” he said.

But, just as New Orleans struggled to find temporary housing and transportation for people who could not leave the city during Hurricane Katrina, Minneapolis residents would face similar difficulties unless city officials worked out a more thorough plan than they have now, Forte explained. The current plan would help get people to the Metrodome and other temporary shelters in the first 48 hours after a cataclysmic event, for instance, but moving them into permanent homes and new jobs is something the city still needs to work out.

Forte said city officials don’t really have a good sense of how many buses could be marshaled for a major evacuation. Nor do they know who would drive them in such a situation. “We’re not good at this other piece,” he admitted.

There would be little federal response in the first 72 hours, he noted, so the city needs to be prepared to handle as much as possible itself in those first three days. Officials would take advantage of mutual aid agreements with surrounding municipalities to augment public safety resources. And they’ve developed mobile cellular and satellite communications systems. But, like New Orleans, there is no sense of where the most vulnerable people are located in the city or how to get to them quickly.

“Vulnerable people should be the primary focus,” said Council Member Don Samuels (Ward 3). “The lesson of Katrina is that we need to know where the most vulnerable are before disaster strikes.”

Part of the problem is a lack of resources. Forte said he’d like to hire someone to lead the planning process, but noted that there’s no money in the budget for it. “We’ll be coming back to the council asking for those resources,” he said.

Targeting Resources
City officials are already getting an opportunity to test their ability to deal with some of the long-term issues that could result from a major disaster. An estimated 350 families have arrived in Minneapolis from New Orleans and other Gulf Coast areas ravaged by Hurricane Katrina. And those 1,000 or so people are going to need services.

That concerns North Side council members like Samuels and Barbara Johnson (Ward 4), who understand that many of their constituents will be competing with these new arrivals for those social services. “I’m concerned about the impact on an already fragile situation,” Johnson said.

Forte said many of the new arrivals are coming here to stay with relatives, but that others will need help from church communities and other informal sponsors to get the information they need to get back on their feet. The city can help by identifying vacant housing units and making certain that those property owners don’t exploit people needing new housing. This will require “constant monitoring,” said Samuels. “We’ll need funding for an inspection specialist to work with these families to ensure that the homes they settle in will be maintained.”

The city’s Regulatory Services department was already looking into those issues, Forte said. And, depending on the number of people who ultimately relocate in Minneapolis, the department’s current staffing levels may be enough. “I can guarantee that it will be a high priority for us,” he said.

Protecting Our Own
While no one in City Hall questions the need to provide much-needed services to those who have come here from the Gulf Coast for a new start, some wonder why this same commitment to service can’t be extended to city residents who Council Member Dean Zimmermann (Ward 6) said deal with “everyday emergencies” like hunger and homelessness.

“How is it that we can’t have that same kind of response to the people in our own streets,” he said. “We need to retool our thinking a little bit.”

Council Member Natalie Johnson Lee (Ward 5) agreed, arguing that these services should be made available to anyone in the city who is struggling to find a home or a job. “Don’t set up systems specifically for our new visitors,” she said. “Set it up citywide for everyone.”

Given adequate resources, Forte said, these sorts of services could be made more accessible for everyone. But only as long as the lessons of Katrina continue to motivate people inside—and outside—of City Hall. “We must tap into this energy in the community,” he said. “We must keep this alive.”

Sidebar: Survival Tips
When catastrophes strike—whether as terror acts or natural acts of biblical proportion—survivors are called to reflect. And just as we as individuals work to understand the lessons of Hurricane Katrina and 9/11, city officials are scrambling to do the same.

Awareness and planning are key to coping with such disasters, says Kristi Rollwagen, the city’s deputy chief for emergency preparedness. But connection to community is vital, as is knowledge of the resources at hand—both conventional and nonconventional.

No one expects a disaster of the sort that visited the Gulf Coast or New York City, of course. Minneapolis has seen its share of tornadoes over the years, but our chain of lakes have never produced a hurricane. And the attacks of September 11 seem to many a world away. But the city has been paying greater attention than ever before to disaster preparedness in recent years. And to hear Rollwagen tell it, each of us should be just as ready for the worst.

“You are ultimately responsible for yourself and your behavior,” she says. “The notion that it’s all up to the government doesn’t work.”

When thinking of the unthinkable, Rollwagen says, it’s necessary to prepare for more than just physical needs. You’ll need to plan for your emotional and spiritual needs, as well as community needs, in order to ensure security and sanity in the aftermath of a major disaster.

At the most basic level, agree upon a family meeting location if you’re forced to abandon your home. Prepare kits with rations for food, water and, ideally, energy (such as batteries). Create a check list for an emergency supply kit. Make sure you pack first aid, clothing and bedding.
You’ll need at least a three-day supply of ready-to-eat and nonperishable, high-energy foods. The greater challenge will come if you find that your struggle lasts into weeks rather than just days.

You’ll also need sanitation and personal hygiene supplies as well as prescription medications. Plus, you should explore alternative communications networks, should landlines and cellular systems malfunction.

And don’t forget emotional support plans, Rollwagen notes. A favorite psalm, chant, or mantra can be a useful tool for stressful times. And knowing how to reconnect with your own spiritual community after a disaster can be an immeasurable aid on your path toward recovery.

“Be engaged with your community,” she says. For many people, whether it’s a terrorist attack or a natural disaster, the terror that is stirred will disconnect them from their ability to act rationally and effectively. Outside of yourself, your community is your base of support and emotional shelter. They are your friends, your neighbors, your family and co-workers.

But be prepared also to improvise when your plans fail you. New York City’s emergency operations center was based in one of the World Trade Center Towers in 2001. Mayor Giuliani and the city needed a back-up location immediately. You don’t know what will hobble your plans.

You may have to remember to think and conceive simply, not through the “it can’t be done and here’s why” adult mind, but with the imagination of a child. Children can have surprising and refreshing ways to help and to approach survival, Rollwagen observes.

When you can’t handle it—when your friends, neighbors, family, even co-workers—can’t help, your first responders are there. You won’t be the only person or family who feels desperate. Remember, they may be stretched thin, even well beyond their expected emergency capacity.

Be aware of your resources. Use these to plan a multi-lateral strategy for your physical, community-based, emotional and spiritual security and sanity. Connect with your community; this planning can save time, sanity, and lives—yours and those whom you love.
—William Wright