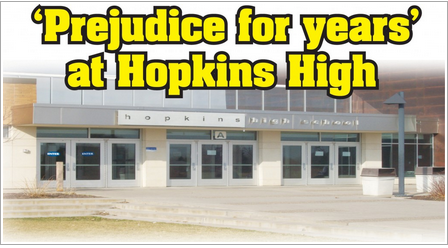 Many suburban schools in the Minneapolis-St. Paul metro area have experienced a rapid growth in students of color over the past two decades. With this growth have come problems of adjustment as virtually all-White schools struggle to accommodate much greater racial diversity.

Hopkins High School, for example, has gone from two percent to 20-30 percent students of color in 20 years, and the adjustment appears to be far from complete. Some Black students and parents are expressing concerns to school and district officials that racial profiling, double standards, and other “obvious acts of racism” at the school need to be addressed.

“There is a problem going on there,” says Veronica Jackson, who recently left Hopkins as a paraprofessional after nine years. She told the MSR last week that Black students too often are “undervalued” at the school.

Following are excerpts from written statements the MSR received from several Black Hopkins students (some of whose names are withheld for privacy reasons):

“All the hall [monitors] come out and watch us as if we are being stereotyped every day,” says a male student.

“Why do you keep picking on this kid just to set him to explode, to get him out of class because you have something against him…?” says another male student. “It’s not fair that a teacher is trying to test you every day.”

“I voiced my concerns to [a school counselor] about a teacher,” says a Black Hopkins sophomore. “After the meeting I felt the situation’s gotten worse. She [the teacher] always belittles me in front of the class, and I feel singled out every single day. I feel like I’m treated different than a lot of my classmates.”

“Some teachers in this school don’t like Black kids. They [are] always thinking Black kids don’t go [to] college when they finish high school,” adds a Black male student.

“My sophomore year, there was an article posted in the school newspaper describing how the Black community here…crowded the stairs and how a group of White students took it upon themselves to take ‘their’ stairs back,” says a Black female. “They called this ‘Operation White Storm.’”

Some teachers “talk down to us,” notes senior Shaquille Brown. “It’s unfair for Black students and [Black] students who are not athletes. We are treated like we’re stupid.” 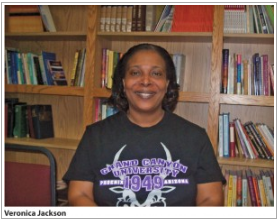 When told about the Black students’ statements and Brown’s perception of a “double standard,” Hopkins Principal Patty Johnson says, “That concerns me a great deal. It is something we don’t want in our school.” 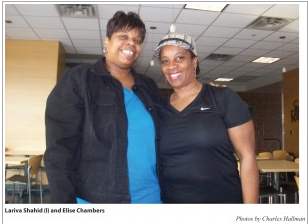 “I’ve never had a problem,” says senior Ebonee Shahid, “but I feel like some teachers do treat students of color a little bit differently, almost like they are intimidated by them.”

Ebonee’s mother, Lariva Shahid, is a 1990 Hopkins graduate. “I moved here from Milwaukee, Wisconsin, and I came from an all-African American school to this school, which had two percent people of color,” says Shahid. “It was very uncomfortable being a student here — I felt like I was being judged because I was Black, and never given the same opportunities as some of these White kids. I made it through because it was my expectation and my family’s that I graduate.”

Shahid says it seems that things today haven’t changed much, although there are more Black students at Hopkins now than in her days there. She reports “racial profiling happening in the halls, students being falsely accused and unfairly suspended. There are…teachers who noticeably treat students of color different than they would a White student.”

She and Elise Chambers, whose two sons are students, were among several Black parents who met recently with Hopkins Superintendent John Schultz on the racial problem at the high school.

“As superintendent, I take these [concerns] very seriously. The fact that we are having a parents’ forum is the first step,” says Schultz, who told the MSR last week that he met with several Black parents in March.

“You ask is Hopkins [High] School racist? Yes it is,” acknowledges Hopkins High Equity and Inclusion Coordinator Stanley Brown. “Any institution that’s predominately White, especially schools, is inherently racist by its existence. When you have people who have their minds set, how do you work with staff, parents and students to work on what we need to do [so] that all students feel that they are a part of Hopkins [High] School?”

Not all Hopkins High Black students have personally experienced problems. Lisa Anderson, a Black parent of two daughters, says, “We haven’t had any issues that I know of. My girls haven’t gone through or had any issues, but their friends have gone through a lot of stuff.”

Anderson does acknowledge, however, that there has been “a lot of prejudice for years” at Hopkins. “My kids have been able to deal with it. They’ve been in the school district since second and third grade. But I know some [Blacks] have more concerns than me.”

Both Jackson and Chambers believe that a leadership change this school year has had an adverse effect. Johnson replaced Willie Jett, who resigned last summer to accept an administrative position with St. Paul Schools.

“I must give him [Jett] credit that when problems occurred, he would pull everyone in the office and get to the bottom of it and try to resolve it,” recalls Jackson.

“Willie Jett was an advocate of all kids. He was very accessible,” Chambers says, adding that she doesn’t see this in Johnson, a former assistant principal.

“I always want students to feel that I am accessible and be open to meet with them,” responds the first-year Hopkins principal. Among her plans after students return from spring break is to hold weekly lunch periods with them.

“We’re out there every day…[but] it sounds like I’m not doing it enough,” admits Johnson, who points out that of 75 teachers and 30 support staff at her high school, 10 or 11 are Black.

“We are looking for more,” says Stanley Brown.

“There is not a support system” for Black students at Hopkins, says Chambers, who facilitates a girls group at the school. “When you don’t have it, what happens is [that] kids tend to act out, [and] then they’re labeled. All they want is someone to listen to them.”

Shaquille Brown notes that many Black students were disturbed when they learned of Jackson’s departure. “Everybody was upset about it, because she was someone who we could go talk our problems to,” he points out.

The superintendent feels certain that the present Hopkins staff can “change culture, practice and visibility. I have the utmost confidence in Patty,” affirms Schultz.

Lariva Shahid believes that if they were White parents, their concerns would have been immediately addressed. “I personally know that [a concern raised by White parents] was addressed just like that.”

“We are still in the process of getting the [Black] parent group together,” notes Schultz. “We are working very hard to ensure that these parents are heard — that all parents have that forum to talk.”

Johnson says that an April 26 dinner and forum is scheduled for parents of color “to share their concerns with us.”

“I would like to see fairness all the way around,” says Ebonee Shahid.