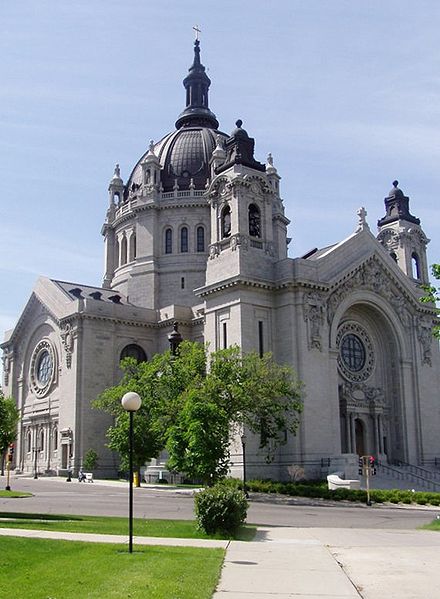 Last week was the first of many Pray-Ins scheduled at the Cathedral by a group of practicing, yet dissenting, Catholics. The first Pray-In, by a group of Catholics supporting GLBT acceptance within the Church, did not happen exactly as planned. According to one of the organizers, Barb Frey, there were about 30 attendees; their plan had been to pray the traditional rosary aloud together at the St. Paul Cathedral. However, they were told by church officials that they were not allowed to pray aloud, because they had not received prior permission for public prayer. They were permitted to pray in silence.

FULL DISCLOSURE: The author is a lifelong Catholic and this article includes her opinions as well as reporting.

The group has a statement of principles that outlines their concerns and their hopes for church leaders. Here is an excerpt from that statement:

◦       We believe that all Catholics, including gay, lesbian, bisexual and transgendered Catholics, have the right, the privilege and the duty to live the sacramental life of the Church. We believe that all people can and should express their sexuality in a loving, life-affirming manner that is in keeping with Christ’s teaching.

◦       Marriage, a lifelong and sacred vow of love and commitment, is the cornerstone of a healthy society.  Because of the centrality of marriage to the wellbeing of families and communities, we cannot in good conscience exclude loving and committed couples from the blessings of this institution based solely on their sexual orientation as we believe this will result in deep and lasting harm to the people and communities we love.

◦       In deep concern for the many urgent needs of our community, we pray that our Church’s leaders direct our collective spiritual and material resources to lift up the weakest among us rather than diverting those resources toward political actions that cause pain and division and which result in further suffering for our GLBT brothers and sisters…

Church officials said they were concerned that the praying might disturb others praying separately from this group. The vigil was scheduled for a time when other events would not be happening; though the St. Paul Cathedral is open for prayer, visits and Eucharistic Adoration most of the week. (Eucharistic Adoration is a practice of the consecrated host exposed to be adored by the faithful.)

Jim Accurso, Media and External Relations Manager for the Archdiocese of St Paul and Minneapolis, explains that permission is needed because the Cathedral is very busy. Usually permission is granted by the rector, however when the event is not in accordance with the teaching of the Church, the decision to grant permission would be made by the archdiocese.

Accurso said that it is important to understand why the Catholic church supports the Marriage Amendment. The Church’s goal is to defend marriage as a bond between one man and one woman for the purpose of raising children.

He also said that the $650,000 the Archdiocese spent on promoting the Marriage Amendment in 2011 did not come from parishes, but from income on investment. He stressed that no programs serving Minnesota’s poor, needy or disadvantaged have reduced budgets as a result of the expenditure and that many programs have actually seen an increase in budgets in the last year.

Of course, the money to invest must have come at least partially from parishioners at some point, and $650,000 spent on the Marriage Amendment means $650,000 less to spend on programming to serve the poor, needy or disadvantaged in Minnesota.

It is true, you can’t take away rights if someone doesn’t have them, but it does seem like it’s advocating for a basic inequality. It’s that inequality that triggers questions with some Catholics who were brought up to “judge not” and “love thy neighbor as thyself.”

Frey made it clear that there are two purposes to the public vigils. First, there is the very direct goal of letting church officials know that there are practicing Catholics who do not agree with the current stand or actions of church leaders in regard to “discrimination against any child of God based on their race, nationality, ethnicity, gender, socio-economic situation, conditions of birth, or sexual orientation.”

Second, the group hopes to send a message to other Catholics with similar views, to let them know that they are not alone and to provide a forum for them to respectfully show that they too see that there is another Catholic reading on the issue. As their principles state, “We aim to follow the example of the all-inclusive and expansive love of Jesus Christ who welcomed all those who followed him.”

Accurso maintains that Catholics who have issues of conscience that conflict with the Church’s teaching should seek guidance from their parish priest or send a letter to the archdiocese.

Unfortunately this discreet approach has left many Catholics alone – in and out of the Church. Perhaps the vigils will persuade the church leaders to begin a dialog that may lead to change on the matter.

While the Catholic Church holds fast to its dogmas and doctrines, it has been known to interpret them differently throughout the years. For example, Mass attendance was not obligatory until the 11th century, Papal infallibility was not proclaimed until 1864 and Vatican II brought a host of changes from Masses in English to declaring Mary to be the Mother of the Church. Change is not impossible and it begins with an open conversation of all parties.

The Minnesota Catholic Conference website defends their right to engage in civic discussion:

People may disagree with the Church’s position, but Catholics are not disqualified from public debates merely because what they know by reason is also supported by what they believe God has revealed. To claim otherwise is a radical assault on free speech and an affront to this nation’s cherished tradition of religious participation in important political questions, such as the Civil Rights movement.

I might modify that statement to defend the rights of dissenting Catholics to engage Church leaders in respectful dialogue:

Church leaders may disagree with some Catholics’ position, but those Catholics are not disqualified from public debates merely because what they know by reason is also supported by what they believe God has revealed. To claim otherwise is a radical assault on free speech…

The group plans to reconvene at the Cathedral every Tuesday at 6:00 p.m. from now until the election this fall. They did not seek permission for public prayer from the Cathedral, as they were told that it would not be granted. The group plans to pray silently, although they have permission to bring an ASL signer. The signer will be able to lead the attendees in united prayer, without disturbing others in or near the church.

The group plans to meet on Tuesdays on an ongoing basis. The plan is to meet each Tuesday at the conclusion of the 5:15 Mass at the Cathedral of St. Paul, and to pray the rosary for their intentions. The prayer session is expected to last approximately 30 minutes.