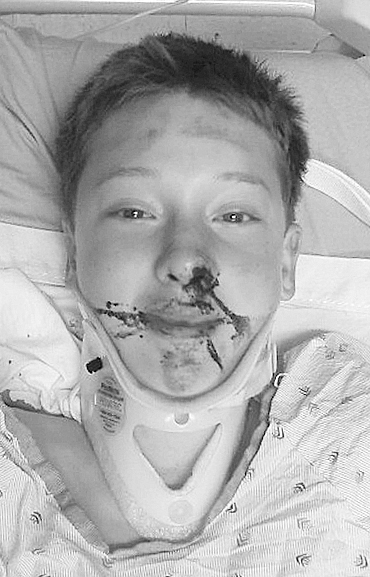 Banged up, but alive, and he will be well. Aidan Sponheim in the Emergency Room.

We’ve all heard the term brain bucket used to describe a motorcycle helmet. I recently learned another term for a bike helmet from a nurse at Hennepin County Medical Center (HCMC): egg cup. Who goes around comparing heads to eggs?  Maybe we should.

It was a bike helmet – a relatively slender shell – that protected my son Aidan from head injury last month.  Exercising his independence as a confident 13-year-old, Aidan was riding his bike alone to summer camp at the University of Minnesota when he was hit broadside by a delivery van.  He was on a bike trail, attempting to cross 26th Street just east of Hiawatha Avenue.  City officials call Aidan’s predicament a “double threat”:  cars were stopped in two lanes, one of the drivers urged Aidan to cross and a vehicle in the open third lane – unseen by Aidan and driven by someone who was oblivious to the bike path crossing – kept going.

The gods were smiling.  The driver of the van slammed on his brakes.  Aidan took the force of the impact in his pelvis, which was fractured; he skidded across the pavement on his arms and knees, where he suffered those nasty abrasions known as “road rash” by bike riders and ER doctors. Spitting out blood, feeling severe pain in his hip and leg, Aidan started shrieking for help. Bystanders comforted him and a fire truck, followed by an ambulance, arrived within minutes. A paramedic gave Aidan intravenous morphine en route to HCMC and then telephoned me.

When my husband and I first saw him in the ER, Aidan was still wearing the protective neck brace. He had obviously hit his face and forehead when he landed. His nose and upper lip were bloodied and swollen. A red mark across his forehead showed where the front edge of the helmet had dug in.

When my boys were little, one of our favorite babysitters was hit by a car while riding her bike. She wasn’t wearing a helmet and she suffered a serious head injury that kept her in the hospital – arduously regaining her ability to eat, speak and walk – for weeks. We saw her periodically during the ensuing years and though she completed her education and started a career, her personality was changed.

Aidan never lost consciousness.  His precious “egg” stayed intact, thanks to a well-designed dome of hardened foam and plastic. Aidan lost no mental abilities. No part of him went away.

The line between an intact child and one who is permanently altered is as delicate as an eggshell or a skull.  Risk abounds and accidents happen. The outcome of this event could easily have been far worse. We’re thankful that the vehicle wasn’t moving faster.  We’re deeply grateful for the fact that Aidan wears a helmet, properly fitted and fastened, whenever he rides his bike.

Sarah Sponheim lives with her family in ECCO.