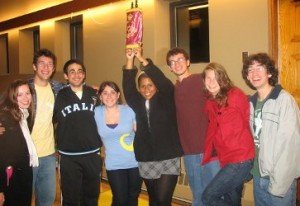 Northfield, a small town known for cows, colleges, and contentment, is not known for anything Jewish. It is in Rice County, nearly an hour’s drive from the glatt kosher displays of Byerly’s and the late Fishman’s. This makes keeping Passover seem like something that requires some tsurris.

Yet the living room of Carleton College‘s Jewish Interest House, Page House, was filled with students last Sunday trying to make Passover here in Northfield a breeze. The Jewish Students of Carleton (JSC), the school’s Jewish student organization, step up big every Passover in order to help students keep as much of the holiday as they desire.

Every Sunday night, about 20 students gather at Page for the weekly JSC board meeting where all upcoming JSC events are planned. While the board has formal officer positions, the way it actually functions is more relaxed with everyone who comes to the meeting having an equal voice. The JSC has grown rapidly. Just four years ago, only five or six people would be at board meetings. But as Carleton’s Jewish population has rapidly grown with the recent incoming classes, so have the number who wants to be actively involved in the Jewish community.

During Passover, this communal spirit especially comes into play with students volunteering to cook every non-Seder night.

“Buffalo doesn’t have a strong Jewish community,” Ben Somogyi, a junior from Buffalo, NY says. “It is really nice to come to Carleton and celebrate the holiday with friends. I like that individuals take it upon themselves to cook meals for the entire Jewish community.”

Laura Michel, a junior from suburban Philadelphia agrees, “It’s just really nice to hang out and eat together every night. It’s also spring, which makes it feel even better, especially when we eat outside.”

Bon Appétit, the college’s food service provider, cooks a fully kosher meal for both Seders but not so much the rest of the holiday. Carleton’s dining halls typically have boxes of matzah out and occasionally make K-P dishes but there have been days in the past few years when they forgot to do anything.

Page House is continually kept open during Passover and stocked with food for people to eat during the rest of the day.

Seders on the first two nights of the chag pack the school’s Great Hall.

“I just love the din in the room as everyone goes around telling their own version of the story of Passover,” says Rabbi Shosh Dworsky, Associate Chaplain at Carleton who leads the first night’s Seder every year.

Students, professors, Jewish Northfield residents all commingle at the Seders, sometimes with a surprise guest. Last year, Garrison Keilor, the host of NPR’s Prairie Home Companion, came to Northfield for the first night’s Seder and served as narrator for the telling of the Passover story. Rich Dworsky, Prairie Home Companion’s musical director and Shosh’s brother, has become an annual guest of the first night Seder. Rich and his mother have extended an invitation to Keillor for family Seders several times. Shocking everyone when he walked into the room, Guy Noir himself ate a sandwich of matzah, charoset, and maror.

The Second night’s Seder is a bit more low-key with it being entirely run by students. At the meeting Sunday, several people gave ideas of what to do at the Seder in order to make them more like the ones they have at home.

Back at Carleton, the JSC plans to kosher Page’s kitchen for Passover next weekend. Rabbi Shosh will bring down all of the Passover food needed from the Cities, including being the JSC’s “meat connection”. Since no kosher meat is sold in Northfield, JSC Shabbat dinners are almost always vegetarian. Passover is one of the few opportunities for students to eat kosher meat at Carleton.

“When you’re really involved in making the holiday happen, the preparation is the most fun part,” Dworsky says. “The student initiative here is amazing, they really take on the idea of celebrating the holiday as a full week festival when many other people’s participation the holiday drops off after the Seders.”

This is a guest post by Scott Fox, 21, a young wanderer of sorts having grown up in the Jewish communities of Boston, Cleveland, and Memphis all while maintaining the New York accent he got from his parents. He loves the new home he has found in the town of cows, colleges, and contentment:  Northfield, Minnesota, where he is a history major at Carleton College. A pop culture geek who has been surrounded by Jewish humor his entire life; he hopes to be a journalist or an historian.